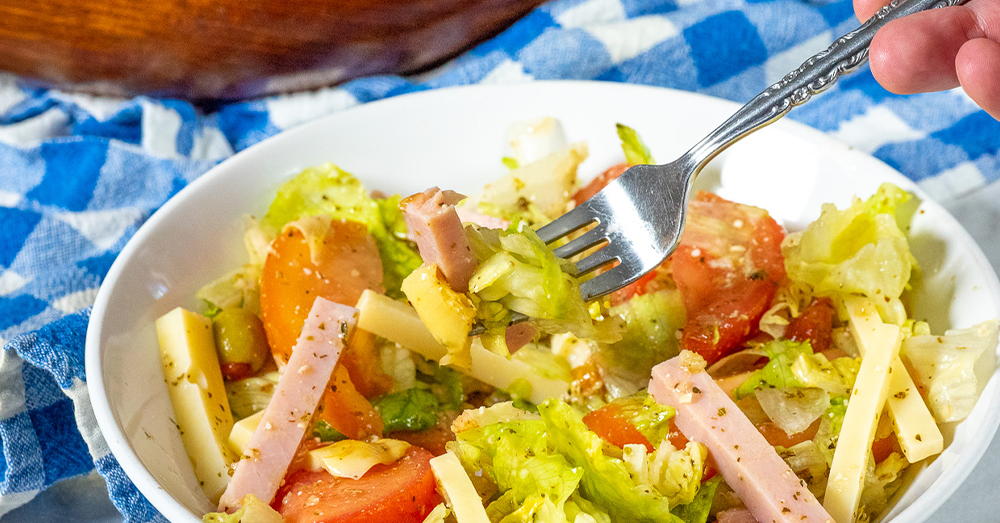 The 1905 Salad isn’t quite as old as 1905 but the restaurant it hails from is. The Columbia Restaurant is Florida’s oldest restaurant – they opened in Tampa’s Ybor City in 1905, but the salad didn’t come along for a few more decades. Created by a waiter in the 1940s, the 1905 Salad was named one of America’s Top Ten Best Salads by USA Today, and one bite of that savory, salty, crispy salad and rich vinaigrette will convince you that it absolutely deserves that title.

This is no wimpy green salad. There are thick matchsticks of julienned ham and Swiss cheese, there are pimento-stuffed olives and artichoke hearts and giant wedges of juicy tomato, there’s even an extra helping of cheese in the form of finely grated Parmesan, but what ties it all together is the dressing.

See, the dressing is no wimpy dressing either. It’s not just a basic vinaigrette – sure it includes olive oil and vinegar, but it also has a hearty dash of oregano, four cloves of garlic, and two heaping tablespoons of Worcestershire sauce. That Worcestershire sauce gives it a rich umami flavor and I’m convinced that’s the thing that keeps you coming back for more. (And more. And even more.)

Funny story, when the president of Lea and Perrins heard that The Columbia Restaurant was his biggest customer, he decided he had to try the salad for himself. Sure enough, he was hooked, just like anyone else who happens to try this salad.

If you’ve had it before you’ve surely been longing to have it again, but lucky for us, The Columbia Restaurant has made it easy for anyone to make it right in their own kitchen. No trip to Florida needed!

Recipe from The Columbia Restaurant.