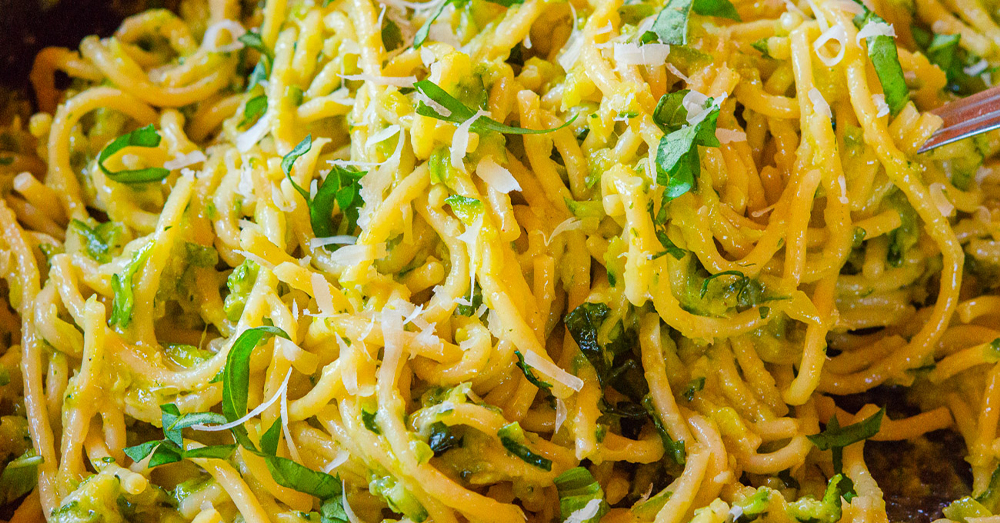 The only way to describe that sauce is magic.

I can’t think of a Smitten Kitchen recipe that has ever steered me wrong, but this one is especially right. It uses a veritable mountain of zucchini but magically turns it into a sauce that’s very nearly creamy in nature (despite there being no cream involved) and full of buttery, rich flavor. It may be full of zucchini, but it doesn’t even register as zucchini because it’s cooked down into something that’s far richer than you could ever imagine a water-filled zucchini to be. And yet it’s just a handful of ingredients and about thirty minutes to make. Pure sorcery.

As you might have guessed, you’re going to start by grating heaps of zucchini. Like four or five of them. It will seem like A LOT, but just trust the process.

You’ll cook it down – like, way down – in a generous portion of butter and garlic until it releases its liquid and becomes denser and mushier than you might have thought possible. (That only takes about fifteen minutes though, so never fear.)

As it breaks down, you’ll help it along with your spatula and once the consistency is almost spreadable, you’ll stir in some reserved pasta water and the spaghetti.

A quarter cup of Parmesan and a handful of basil are the only other components that go into finishing the sauce but it tastes like so, so much more.

But the magic here is in the method, which takes a handful of simple ingredients and transforms them into something they weren’t capable of entirely on their own. I love zucchini just as it is, but cooked like this I think I might have gone ahead and fallen in love with it.