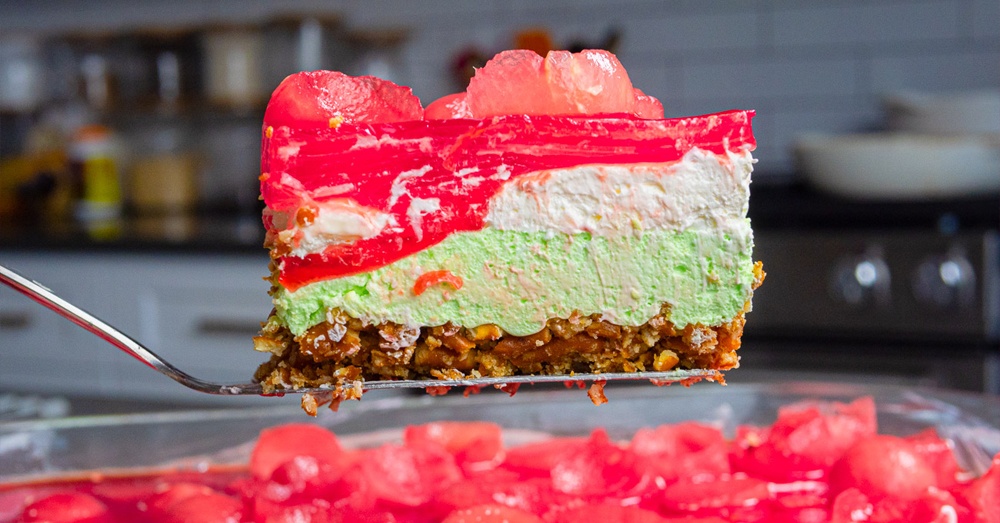 Fresh, fruity, and creamy all in one dessert.

When it comes to salads we have some very different ideas about them today versus how people decades ago thought of them. These days a salad is usually made from greens, tomatoes, and other vegetables tossed together and it’s often savory. But, in the old days a salad often to referred to anything that was served cold, had a cream or gelatin base, and had at least one fruit or vegetable ingredient. There were some unfortunate salads that contained both gelatin and meat, but many of the recipes that used the term from the mid-century were sweet. And, this delicious watermelon pretzel pie is no exception.

The base of this dessert is a blend of crushed pretzels, butter, and sugar. This is baked lightly before the other layers are made. The first layer is a blend of cream cheese, Cool Whip, and lime gelatin. We also added a bit of green food coloring as well. Visually this is the “rind” part of the watermelon salad which is why the green works so well here. You can of course leave it out if you’d prefer.

The hardest part of this recipe is just that you have to refrigerate each layer before adding the next one. It’s not strenuous but it is an investment of time (and it’s so worth it in the end). For the green layer you’ll have to let the the Jello mixture chill until almost set before combining it together with the whipped topping and cream cheese. Then allow to set for another hour.

Once the first layer is set up the next one is made from cream cheese, Cool Whip, and sugar. This layer also needs another hour to set up.

While that’s setting you can work on getting the watermelon cut up. A melon baller works well here, but you can also cut the melon into small squares if you prefer. The only limitation on the sizes is that they need to be small balls or chunks. Large ones will poke out of the Jello too far and will not look as neat.

The final layer is made from watermelon Jello and fresh watermelon. To make sure that the hot gelatin mixture doesn’t melt the first layers the watermelon Jello will need to set for an hour before combining it with the fruit and pouring over the top of the dessert.

The last step is -you guessed it- letting this show-stopping dessert set up in the fridge for 2-4 or until it’s firm. Then cut into squares and enjoy this luscious, creamy, fruity, tangy dessert that’s a wonderful taste of summertime flavor.