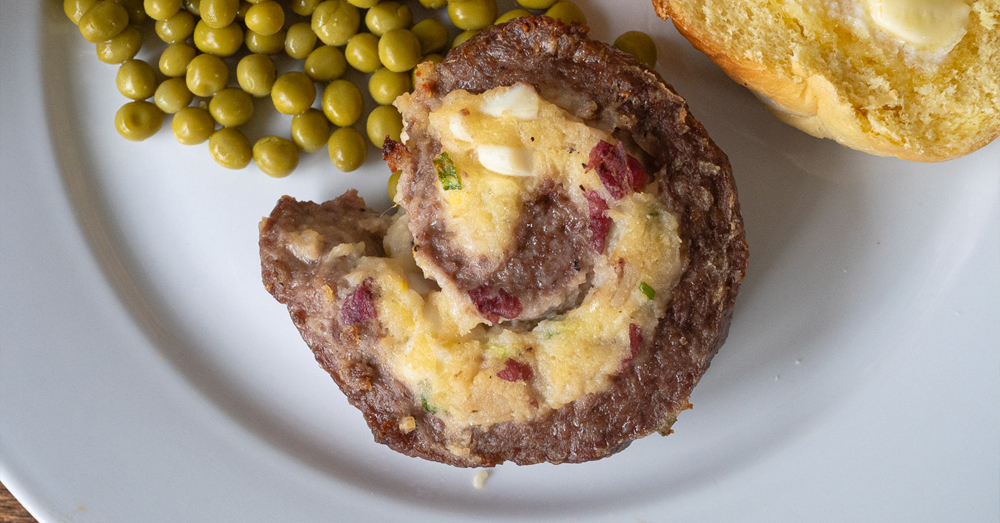 A comforting dinner with some retro flair.

It seems to often be the case that the most comforting foods are the ones that lean in a retro or nostalgic direction, and these Stuffed Meatloaf Slices definitely fit into that category. They’re a unique way to go about a meatloaf dinner and they have a decidedly 1950s feel with a beefy, savory flavor that’s accompanied by a creamy mashed potato filling. (But it’s not just mashed potatoes… no way. It’s so much more.)

Usually when you see a stuffed meatloaf, it’s actually a meatloaf with filling in the center. This, I suppose, isn’t really a meatloaf at all… rather, it’s a meatloaf mixture that’s flattened out, lined with filling, and then rolled up into a spiral and sliced before it heads into the oven. It’s a nice way to go about it, because you get browning on each portion. (Don’t worry, the slices stay plenty moist.)

And the filling? Well, that’s made up of mashed potatoes – which go perfectly with meatloaf – and a surprising combination of chopped hard-boiled eggs, Miracle Whip, Parmesan cheese, celery, and green onion. It doesn’t sound like it’s going to work, but it just does. It’s creamy with a little piquant crunch.

Now, I’m not the biggest Miracle Whip fan but it works especially well in the sauce you serve alongside this, where it’s mixed simply with some milk and green onion. While I usually find the stuff a bit too sweet, here it just balances out the savory beef and salty mashed potatoes perfectly.