Spend The Night Floating Down The River In This Inflatable Tent

At some point in our lives, we’ve all gone camping by a body of water and probably thought how lovely it would be to actually be able to put our tent out in the water. Thanks to Ethan Smith, the founder of outdoor apparel retail company SmithFly, campers will now be able to enjoy a night’s sleep out on the water with his invention of an inflatable floating tent.

The SmithFly’s Shoal Tent, which costs $1,499, has been featured in videos on Facebook, which have accrued well over 20 million combined views. The sales have tripled according to the estimates that Ethan laid out when he first launched his product back in October 2017. And while he cited a potential deal with outside investors, he declined to provide the total sales figures.

Ethan told CNBC Make It, “I just figured I’d throw it out there and if there were a couple of people that were interested I’d sell a few of them. And it took off right away. I mean, as soon as we got it posted, it kind of went viral and it went crazy.”

At the moment, Ethan has stated that customers who are looking to order one of his floating tents can expect roughly a six-week wait while he works closely with his manufacturer in China to keep up with the demand.

How the tent works, is it comes with a provided air pump to inflate it, and the tent features both a tear-away top and a drop-stitch floor, which makes the inflation process more similar to that of an air mattress rather than a raft. Ethan says that the inflatable floor of the can alone support up to 1,200 pounds, but has additional support in the underlying raft in the form of redundant air chambers to further help prevent accidental sinking.

SmithFly is based in Troy, Ohio. The company was originally focused solely on fly-fishing equipment but has slowly over time expanded its line to include other types of outdoor gear. Prior to the tent, SmithFly debuted an inflatable paddleboard, as well as a raft that was customized to make fishing much more comfortable.

Eventually, Ethan toyed around with the idea of using his same Chinese manufacturer to start creating tents. That’s when a friend of his, who owns a canoe livery, which is run out of campsites, had an idea. He told Ethan, “If you put a raft under that and combine the tent with the raft, we might have something really cool and we can rent it out on the river.”

What are you doing this week end? Oh, just camping on the water. #SmithFly #ShoalTent #theworldisyourwaterbed

The early success of the tent was good news for the company that launched in 2011. At the time, the recession was causing the large branding firm that Ethan worked at, to take huge hits to the marketing team. He watched his team shrink from 12 people down to only 3. Ethan’s wife worried about what would happen.
Ethan recalls, “Every week when I’d come home and they’d have layoffs, my wife would say, ‘Well, when are you going to get laid off?’ I had this idea for this fly-fishing stuff and she said, ‘Why don’t you start that and then if you get laid off you can work on that.’” 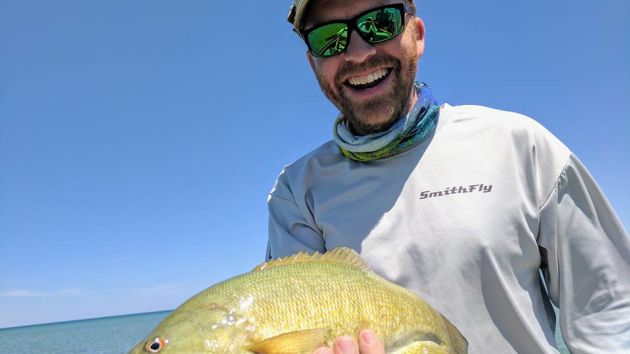 Ethan initially self-funded his fly-fishing side business with a $10,000 loan from his bank in order to get started on creating his customized vests and fly-fishing gear. From there, he transitioned into inflatables.

When he first unveiled the tent on social media, it was clear that demand was far going to out weight the supply. Ethan air-shipped the tents over from China at a much higher cost but was still unable to fulfill the amount of orders. As a result, new customers had to join a wait-list ever since early February when the tents began to ship.

Now, Smith figures that the product he took a gamble on could actually – in a year or so – dwarf everything else in his company by a factor of 10. This is, of course, assuming he can stay ahead of the competition. There are already a number of knockoffs surfacing, which is a common hazard in e-commerce.

SmithFly doesn’t have a patent on the inflatable floating tent, still, Ethan is confident that he can market it as the first of its kind, as well as implement planned innovations.

“I know that’s going to happen, we’re just going to have to stick to being the original,” he says.