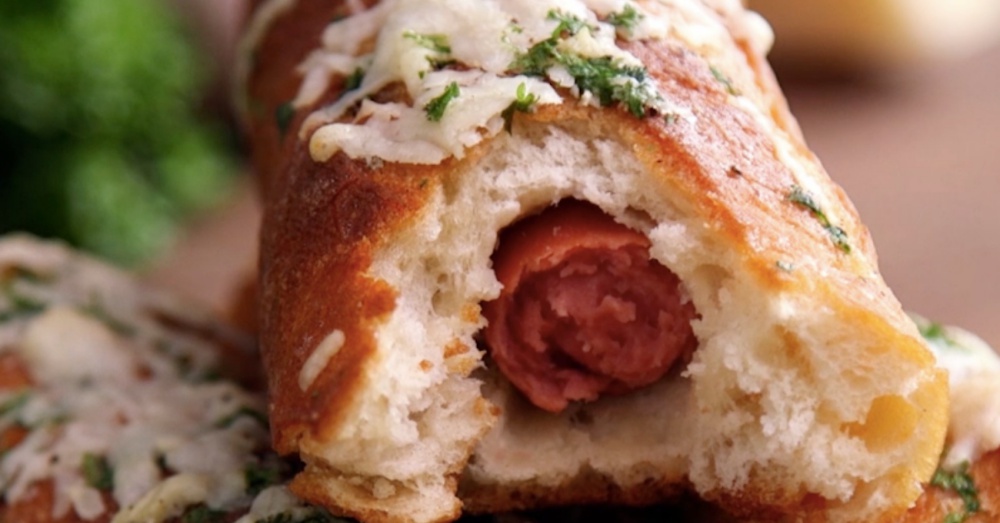 The humble hot dog is the ubiquitous All-American eat, found at ball games and backyard barbecues everywhere. It’s utilitarian, it’s inexpensive, it’s easy to prepare. (And it also tastes really dang good.) There are so many good things we could say about the hot dog, but we never would’ve described it as elegant. Until now, that is.

See, if you take a soft and crusty baguette and have it stand in for the bun, you’ve upped the game considerably. If you then dress that baguette up with a few key ingredients, you’ll take that unassuming hot dog to new heights. New heights of flavor and fanciness!

The best thing about this recipe is that it takes little more effort than placing a hot dog in a regular ol’ bun. All you do is hollow out a slice of baguette just enough to make room for the hot dog, and then top it with a tantalizing mixture of butter, garlic, salt, pepper, and parsley. A sprinkle of grated parmesan is the final touch before they head into the oven, where the bread gets oh-so-crispy, the cheese gets bubbly, and the garlic aroma mingles with that of the savory frankfurter.

We love that these are so simple to prepare, but that they’ve got a little something extra compared to your basic bun and dog. They’re equally at home on game day or an evening soiree, and when we tell you that they’re absolutely delicious, we’re not lying.