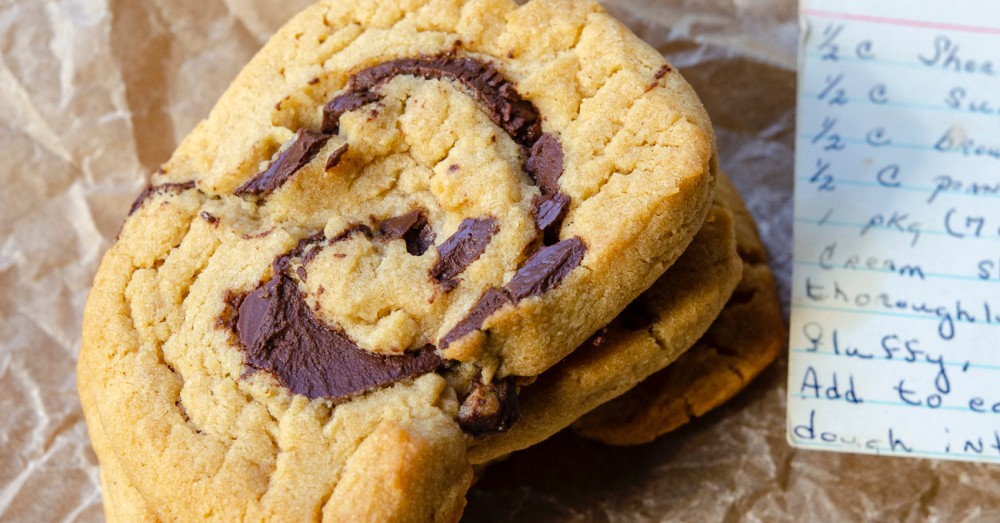 When I pulled this stained index card out of the recipe box and saw the name “Whirligig Cookie” at the top, I was instantly hooked. Doesn’t that just sound like a fun cookie?! And then I saw that it was a combination of peanut butter and chocolate, so even better. That’s always a winning combo in my book. The card seemed like it had seen a lot of love and even though they’re a rolled cookie, they seemed easy enough to make, so I decided to give them a try. And I’m so glad I did – soft and full of peanut butter flavor, they also give you a bite of melty indulgent chocolate – they’re delicious.

This recipe card came out of an old recipe tin that I’ve been cooking my way through. I call it the Recipe Tin Project. It’s chock full of old recipe cards, most of which seem to be from the ’60s and ’70s. I love food history, and the idea is to breathe new life into these recipes from the past and maybe learn a technique or two from them along the way. A lot of the cards seem to be collected from various friends and have cute illustrations though this one is simply written on a plain index card.

There are smudges and fingerprints all over the card so it’s clearly one that’s seen some use and that’s always a good sign! The handwriting is unique – sort of a print that is itching to actually be cursive. Some of these cards have very little in the way of instructions or measurements, so it was a relief to see that this one had everything pretty clearly laid out. Even so, I still had a bit of trouble with this recipe! (More on that in a minute.) 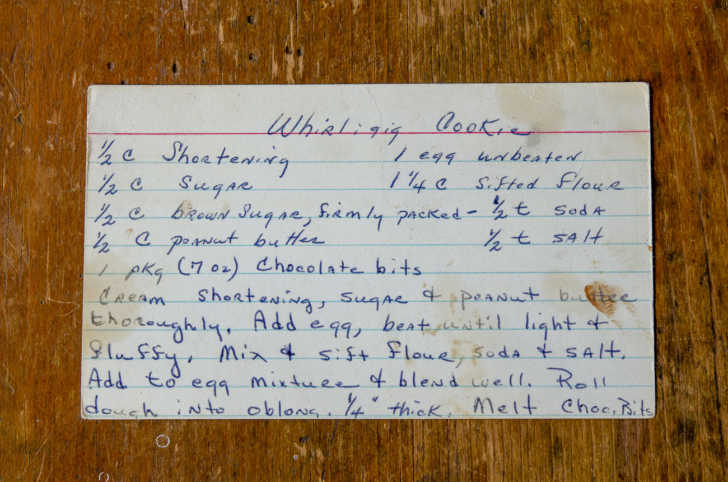 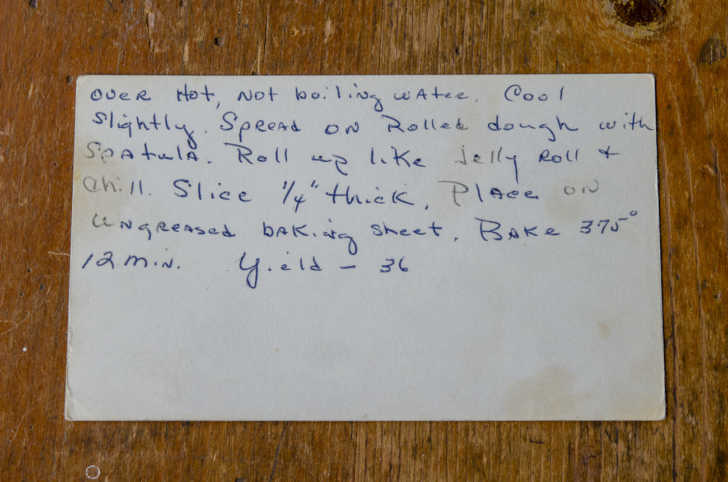 The card (no author name on this one) calls for you to cream together shortening, peanut butter, and the sugar. (I took that to mean both sugars). Then, you beat in the egg until fluffy and sift in the flour, soda, and salt. Easy enough. Where things get trickier is when you roll the dough out, spread melted chocolate over it, and roll it back up.

The recipe calls for “chocolate bits,” which are not a thing I found in my grocery store so I went ahead and used chocolate chips. And I might have cheated and just melted them in the microwave instead of using a double boiler. (Don’t tell anyone.) The melting and the spreading of the chocolate went fine, the trouble came with rolling the dough up. See, the first time I made these, I used a more “natural” peanut butter that had a crumbly texture and in turn I think that made my dough crumbly. Rolling was a disaster!

So I bought some new peanut butter and tried again. This time, things rolled up pretty smoothly. You have to be careful with it, but using some plastic wrap or parchment paper to help lift the dough does wonders. And then you chill the dough. The card doesn’t say for how long – but here’s the rub – by the time the dough feels firm enough to slice, the chocolate has hardened back up entirely.

That makes slicing these a little cumbersome, but a very sharp knife does the trick and you can press the cookies back together where you need to before putting them on the baking sheet. My cookies took closer to ten minutes than twelve, so watch your ovens. Twelve minutes made them very crispy and on the edge of burnt. I much preferred the ten minute cookie – it has a soft and crumbly peanut butter bite with an adorable spiral of melty chocolate. And for a girl like me who loves nothing more than a peanut butter cup, that’s exactly my kind of cookie!