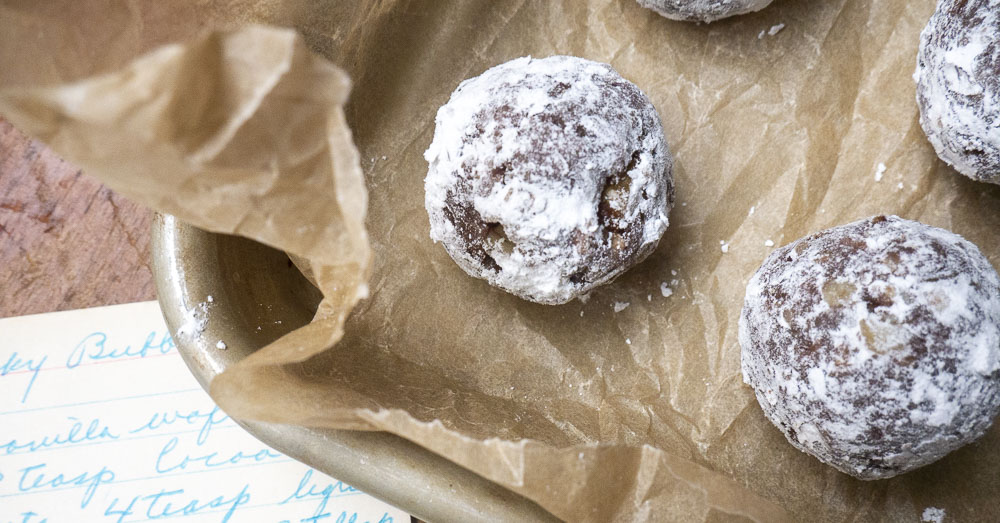 A sweet little holiday treat from an old recipe card.

How could I have resisted making these upon seeing this old recipe card? Christmas Whisky Bubbles! Well, that’s just the cutest name for a holiday confection… with a little kick. Growing up, my family baked a lot for the holidays but we didn’t make much in the way of candies or truffles and such, so I was excited to try this recipe that was in someone else’s holiday tradition. It turned out to be simple to make and fun too.

This one was written on a lined index card in a bright blue, almost turquoise cursive. The ingredients are mixed in with the directions, which makes it a little harder to make sure you got everything you need, but in this case, it’s only five things, so I managed just fine. The top corners of the card are a little worn, the card itself has yellowed with age, but otherwise, it’s pretty unblemished.

First, it calls for 40 to 50 vanilla wafers, which you crush into crumbs. It seems the finer is better for this application. You mix that with a few teaspoons of cocoa powder and a cup of chopped nuts. Again, finer is better with the nuts as well — I think mine could’ve been smaller.

You mix that with light corn syrup and also a couple jiggers of whisky until it’s sticky and then roll the mixture into balls before rolling them into powdered sugar. That’s it!

There’s no cooking, no melting, no candy thermometers — just a matter of mixing together a few ingredients and then rolling them up into sweet little spheres. Whisky is really the star here — they have a pretty good kick, so they’re aptly named — with just a mildly chocolatey flavor and a nice crunchy texture thanks to the nuts and wafer crumbs.