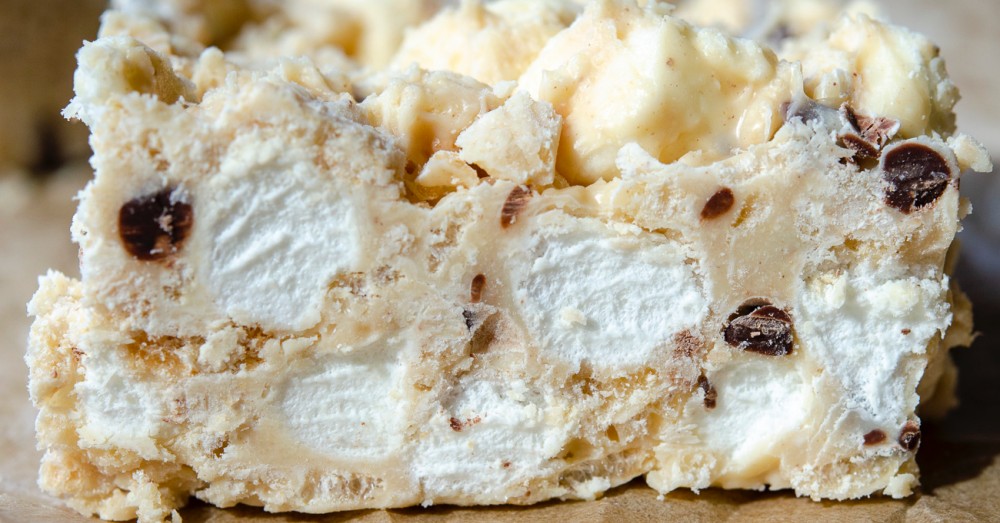 You just need five ingredients and your microwave to make these!

A Rocky Mountain Avalanche Bar is kind of like a Rice Krispies Treat, but so SO much better. If you’re asking me, anyway. Admittedly, I’ve never been the hugest fan of Rice Krispies Treats – they’re kind of hard to eat, don’t have a lot going on, and are just very sticky – but these bars are a different story. They’re a no-bake, no-stovetop bar that’s just as easy to make, and they involve both Rice Krispies and marshmallows but that’s where the similarities end. The differences? Well, there’s a heavenly peanut butter and white chocolate mixture to hold everything together, tiny morsels of chocolate, and mini marshmallows folded right into the mixture instead of melted. If anything, they’re an avalanche of goodness.

Get ready, all you need is your microwave and five ingredients to make these. (How’s that for easy?) First up, you’ll melt some white chocolate chips in a large bowl in the microwave.

Then you’ll add some peanut butter and stir until the mixture is nice and smooth. The cereal goes in next and you don’t have to work super quickly like you do with Rice Krispies Treats, so don’t stress. Then, you want to wait about ten minutes for it to cool off before adding in the chocolate chips and the marshmallows. You want those little goodies intact – you don’t want to melt them.

Then you pour the mixture into a greased pan (or better yet, one lined with parchment paper) and chill the bars until they’ve set. Since the base is made of white chocolate and peanut butter, they need a little help to firm up, but that just means that when you bite into them, they melt in your mouth.

You get a crisp crunch from the cereal but also a melty candy bar vibe from the coating and plenty of pillowy marshmallows and dots of chocolate tucked in the inside. For something so simple to make, these sure are a delight to bite into!