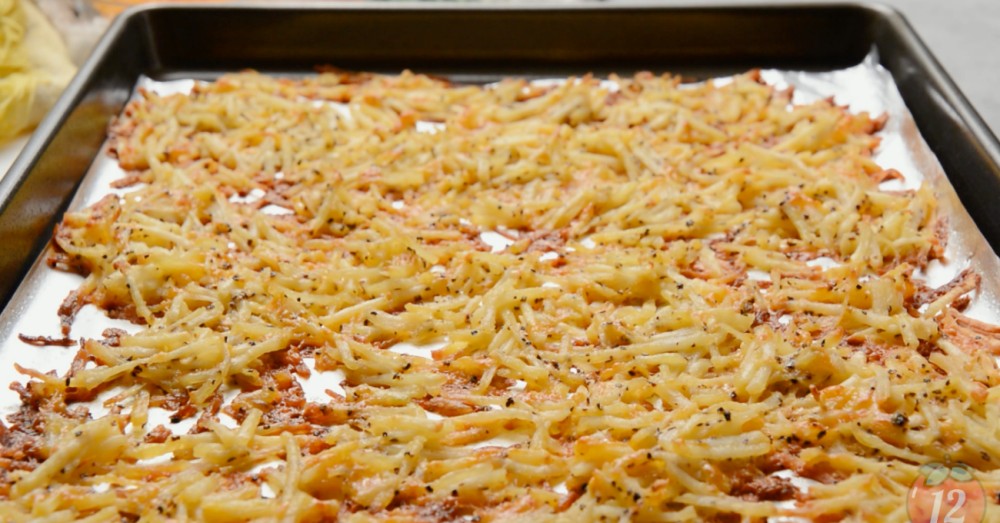 I can cook a great many things very well but for whatever reason, I cannot seem to cook hashbrowns on the stovetop successfully. I never get them evenly brown and worse yet I sometimes (okay, nearly always) end up burning them. It is now a running joke in my family. Imagine my relief when I discovered a foolproof way to cook evenly golden, crispy delicious hashbrowns – in the oven! You just need a sheet pan, your usual bag of frozen shredded potatoes (though you could certainly shred your own), and a few extra goodies to go along with it. (Spoiler alert: there’s cheese involved.)

I love hashbrowns so it’s a little bit of a tragedy that I’m so inept at cooking them. Still, I never gave up. I never really succeeded either… but I found a new method that works incredibly well and here we are. It all worked out in the end. Here’s how you do it:

Get a bowl. Add your bag of hashbrowns, along with some garlic powder, salt and pepper, and olive oil. Also add a beaten egg and some cheddar cheese (more on that in a second) and toss to combine.

Spread it allllll out on a baking sheet so it’s in a single layer. And…. bake. That’s it! You’ll have crispy golden brown hashbrowns in half an hour. (And you can work on pancakes, bacon, sausage, waffles, or whatever strikes your fancy while the oven is tending to them and you don’t have to pay them any mind.)

Now for the egg and cheese – I know if you are a hashbrown traditionalist you might be balking a bit at those inclusions, but they matter in this application for more than just flavor. I haven’t tried this method without them but I suspect they’re needed; they both act as somewhat of a binder and they help with crispiness here. (And besides – eggs, cheese, and potatoes – it’s almost like a full breakfast right there!)

Recipe adapted from Salty Side Dish.