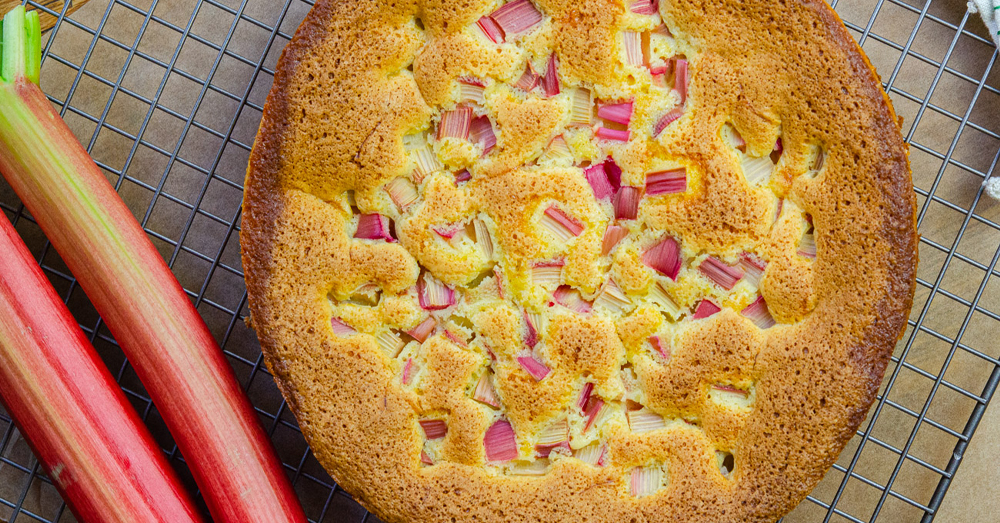 As far as I’m concerned, the best kind of cakes are the simplest ones – the ones that need no frosting, no glazes, and are casual enough to eat on any average day. That’s exactly the kind of cake Norwegian Rhubarb Cake is (or Rabarbrakake if you’re being totally accurate). It’s an easy-to-make cake with crisp, buttery edges and a soft crumb that’s almost creamy where it surrounds the tart chunks of rhubarb. I love a slice for breakfast or with an afternoon cup of tea and I’m sure you’ll love it any time of day too!

Norwegian Rhubarb Cake isn’t something I grew up with but it reminds me a lot of a cake I did grow up with, French Apple Cake. They’re similar in that they’re both rustic and approachable while being totally versatile – you can sub in pretty much whatever fruit you’d like to.

But the rhubarb is a divine choice here! It softens into the cake in a way that almost gives it a creamy bite and the cake is just sweet enough to balance the rhubarb’s natural tartness so it’s a pleasant surprise rather than a puckering shock. I honestly nearly ate the whole cake myself – it was impossible to walk by it on the counter and not cut off another slice to snack on.

There’s nothing fancy and nothing fussy about this cake. It’s just a few baking basics – butter, flour, sugar, milk, eggs – combined in the ideal way to nestle some vibrant fresh fruit. The rhubarb shines here, but the cake itself does too with plenty of soft buttery flavor and a delicate golden brown crunch to top it all off.