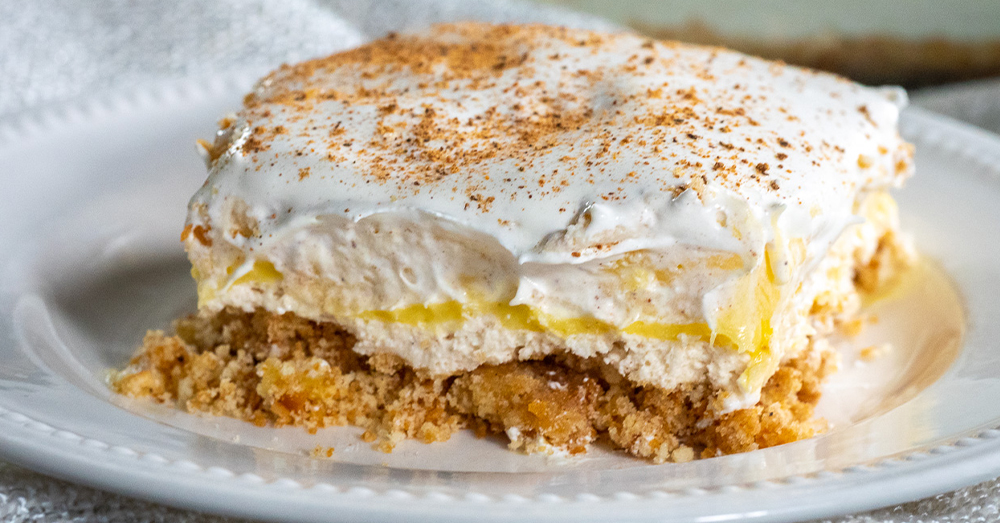 Finally, a festive dessert that you don’t need your oven for.

Maybe it’s just me, but I tend to prefer an eggnog-flavored treat over an actual glass of eggnog any day. Because while the core flavor of eggnog is great – creamy and spiced with cinnamon and nutmeg – a whole thick glass of it is just… a lot. That’s why I love this lush. It is rich in eggnog flavor but it goes down a lot smoother than a glass of the stuff. It also happens to be super easy to make – you don’t need your oven, you don’t need your stove, just a handful of convenient ingredients and a little bit of time.

You might be asking, “What on earth is a lush?” Well, let me tell you. A lush is a creamy layered confection that always involves a cookie crumb crust and some combination of no-bake cheesecake, pudding, and whipped cream. This particular version starts with Nilla wafers, which are crushed into crumbs and mixed with butter, a bit of sugar, and some cinnamon and nutmeg to form a sweet winter-spiced crust.

But the warming spiced flavor doesn’t stop there. The second layer is made up of cream cheese, a little more cinnamon, and some rum extract to round out that egg nog flavor. That’s mixed with some whipped topping and powdered sugar so it’s like spreadable cheesecake filling and it goes over the cookie crumbs. (Chilling in between the layers doesn’t hurt matters.)

The next layer is the pudding layer, which involves instant vanilla pudding and a few cups of eggnog, and the final flourish is a simple layer of whipped topping. And that’s all the work you have to do! The only other step is to chill it until it’s firm enough to slice and serve.

What I love about this is that the eggnog flavor runs all the way through – there’s actual eggnog in the pudding layer, rum extract and cinnamon in the cheesecake, and cinnamon and nutmeg in the crust. But even so, you don’t feel like you’re getting punched by eggnog, since there’s the crunch of the cookie crust, silky cheesecake, and the airier whipped topping. A festive delight that’s no trouble at all to make!

For the cream cheese layer:

For the pudding layer:

To make the crust:

To make the cheesecake layer:

To make the pudding layer: