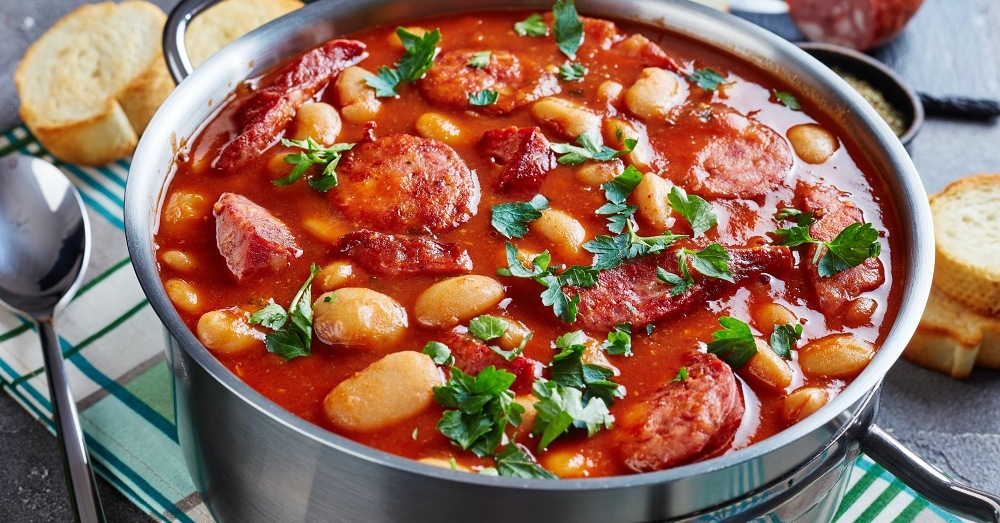 This hearty soup is just the thing on New Year’s.

In many parts of the world the calendar New Year brings not only a new chance at luck and happiness, but also brings its own special cuisine. While in some places it’s considered lucky to eat black-eyed peas on New Year’s Day, this midnight soup is intended to be eaten after the ball drops after the stroke of midnight. It’s eaten as a warming, late-night meal to defrost revelers who spent time outside in the cold watching fireworks and making merry.

In Germany this soup is called Mitternachtssuppe, but in Poland its called Cabanossi soup. Cabanossi is a type of sausage traditionally made from young pigs that have been fattened with potatoes for just this purpose.

In both countries you’ll find recipes that use one or both of the following meats: Polish sausage, ground beef, bacon, or ham. For this recipe we used only Polish sausage but if you have some other meat you’d like to throw in the pot then it’s certainly not breaking with tradition to do so.

To begin making this recipe you’ll need to sauté onions and garlic in olive oil until the onions start to turn translucent. Then add in your sliced Polish sausage and brown it.

For this recipe we used vegetable bullion cubes instead of pre-made broth. Take one cup of the water in the recipe and warm it up, then dissolve the bullion in it before adding to the pan. Next in goes some tomato paste, red wine, chili powder, paprika and cannellini beans.

This is the type of soup that is very flexible meaning you can add whatever you have on hand. Frozen corn kernels or green beans, diced bell peppers, or kidney beans are all good additions to make. But, at its core midnight soup is about meat, beans, and red wine together with spices.

Once this has simmered for 30 to 40 minutes it’s ready to serve. Sprinkle some chopped parsley on top and then garnish with sour cream. Some recipes call for a few tablespoons of crème fraîche or whipping cream to be added to the pot before serving. Both ways of adding dairy to the soup are good, so use what you like best here. It’s also fine to leave out the dairy altogether.

Serve the soup alongside some bread for the perfect winter meal to counteract the chill on New Year’s.

Recipe adapted from The Oma Way.