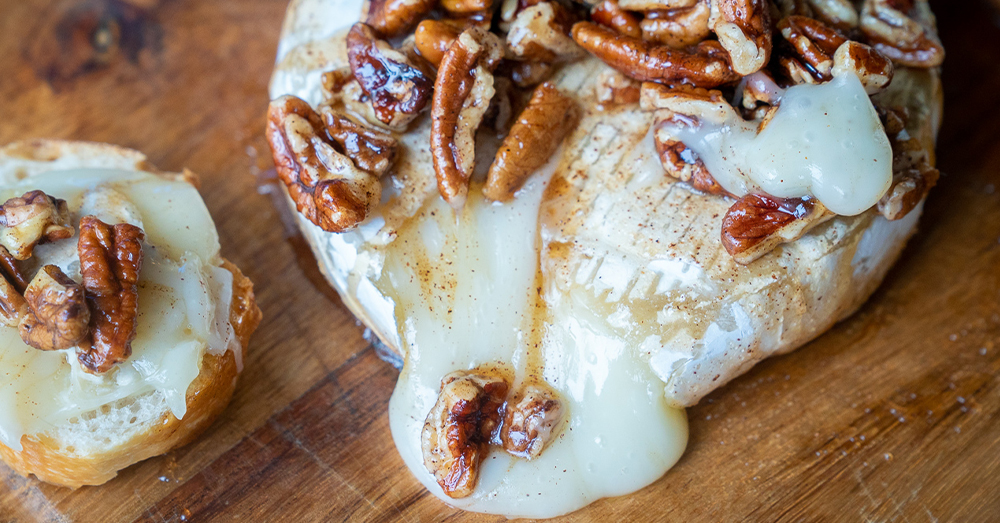 Oozingly delicious and so easy to make.

I think that brie is probably one of the best things in existence. And when you make it all melty and ooey-gooey? Well, then it’s even better. It’s like a magic trick! In this “recipe” (which is so simple I hesitate to call it a recipe), that ooey-gooey good stuff is paired with a buttery brown sugar and maple sauce that’s studded with nutty pecans. It’s a little sweet, it’s sticky, it’s oozingly delicious, and it’s the perfect choice for your next appetizer occasion. (Which can just be a movie on the couch next Friday, just saying.)

You’re not going to believe how easy this is. Ready?

Place your wheel of brie on a baking sheet that’s lined with parchment paper. (Just because this has the potential to get messy should any cracks occur, but they probably won’t.) Pop that in a 350 degree oven and bake until it’s soft but not so long that it splits open. (That should take about fifteen minutes).

Then, remove the brie from the oven and let it sit for about twenty minutes while you work on the topping. Don’t worry, it will still be gooey when you come back to it, it just won’t be molten any longer.

The topping comes together in a saucepan — just a simple matter of melting together butter, brown sugar, and maple syrup before you stir in some pecans and cinnamon. That’s it! Then you pour it all over the brie, scoop it up with a cracker or a slice of bread, and ooh and ahh over how amazing it is.