King Henry’s Chicken in a Pot 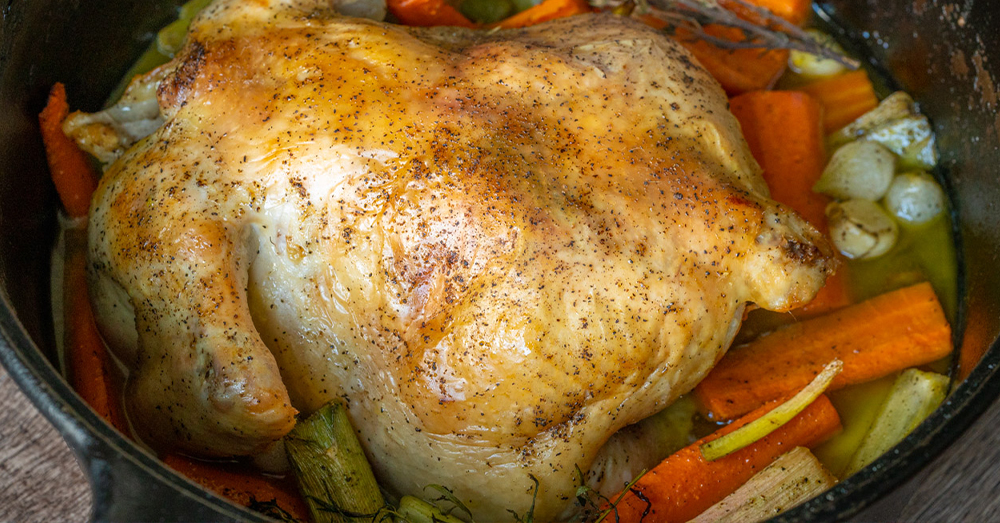 King Henry’s Chicken in a Pot

This roast chicken is so full of flavor you’ll see why it’s been a favorite for centuries.

When you want to make a roast chicken for a special occasion or for Sunday dinner it pays to have a few special ingredients on hand to make it an outstanding dish worth your time and effort. This recipe is said to have originated in the time of King Henry IV of France, who thought it only proper that everyone in the country should have such a meal once a week. While these ingredients would have been out of reach for a weekly meal of most French peasants during the 16th century, today they make a fine roast chicken with much more flavor and tenderness than other chicken recipes.

The original recipe was said to have included a stuffing for this chicken in a pot (AKA poule-au-pot) made from the minced giblets, ham, and seasoned breadcrumbs. Modern versions rely on chicken with the giblets removed and instead of stuffing there is an assortment of vegetables served alongside the perfectly-roasted bird.

To start this recipe you’ll need combine chicken stock and white wine in a pot big enough to cover the chicken completely. Then rub the chicken with butter and season with salt and pepper.

The chicken is baked for 30 minutes in the wine and broth mixture before you add the vegetables and the herbs that really make this dish a special dinner. The flavors of leeks, pearl onions, fresh tarragon, and fresh thyme make this recipe incredibly delectable.

For this recipe we used assorted fingerling potatoes, but you can use Yukon gold potatoes or new potatoes if you prefer. The potatoes in this recipe are cooked separately so that they don’t get too mushy. Then you add them to the vegetables at the end.

Once everything is in the pot bake it for another 35-45 minutes or until chicken reaches an internal temperature of 165˚F.

You can serve the chicken carved with veggies and potatoes, or present it in the pan. Or, you can transfer the chicken to a platter, surrounded by the vegetables, and then carve at the table. Modern chicken recipes call for the chicken to rest before serving, but period recipes advise to serve this dish piping hot.

This is one of the most delicious chicken roasts you’ll ever make (or eat), so perhaps King Henry IV was really on to to something.

King Henry's Chicken in a Pot