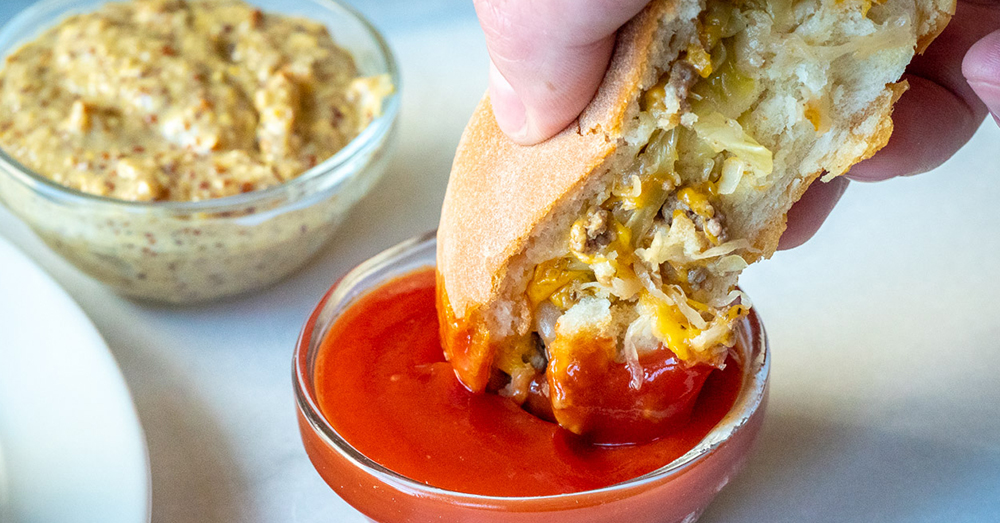 Hamburgers have become one of the most popular sandwiches in the world thanks to fast food chains and backyard barbecues alike. The famed sammie is often said to have originated in Germany. And we’ve previously posted another German recipe which is very like a hamburger, the humble frikadellen. But, now we’ve got yet another spin on the meat + bread formula: the krautburger.

These hearty rolls are filled to brimming with sauerkraut, fresh cabbage, beef, and cheese. It sounds deceptively simple, but these buns are both delicious and comforting at the same time. Sort of like a German take on piroshky or calzone, these savory buns are best served with some mustard or ketchup to dip them into.

Krautburgers are thought to have been brought to the US around the turn of the 20th century by the Volga Germans who lived in and around Southeastern Russia. These hand pies are known as runza, bierock, and by other regional names as well.

To make this recipe you’ll need to start with the dough, which needs time to rise. Warm (not hot) milk is mixed with one packet of instant yeast and some sugar. This mixture needs to sit for 5 minutes so that the yeast can become activated.

Then combine this mixture with flour and oil and you’ll be left with a soft dough. Knead the dough for 6-8 minutes and then allow to rise for an hour. This might seem like a lot of work for some stuffed buns, but it’s so worth it. The freshly-made yeast dough is the perfect compliment to the rich filling inside each one.

While the dough is rising brown the beef and then to the meat add your onion and spices. The simple mixture uses onion, garlic powder, and salt and pepper as the seasonings, and it’s just the right blend for this recipe.

Add the beef to some steamed cabbage and some ready-made sauerkraut and then work on the dough. Roll out the dough on a floured work surface and cut into 6″ squares. Add some cheese to each square then top with 1/3 cup of the beef filling. Pinch opposite corners of each square to seal them shut.

Place the buns seam side down on a baking sheet and bake for 15-20 minutes. At this point the tops should be deliciously browned and ready to go. Since the beef and veggies were cooked before going in, the baking is all about melting the cheese, browning the buns, and melding all the flavors together in a harmonious blend.

These buns are stick-to-your-ribs food and they remind me of growing up having sauerkraut as a side to hamburgers in the summer months, but all wrapped up together in a neat package. Plus, the nature of these stuffed rolls means they travel really well and make great lunches and picnic fare!

For the beef and assembly: