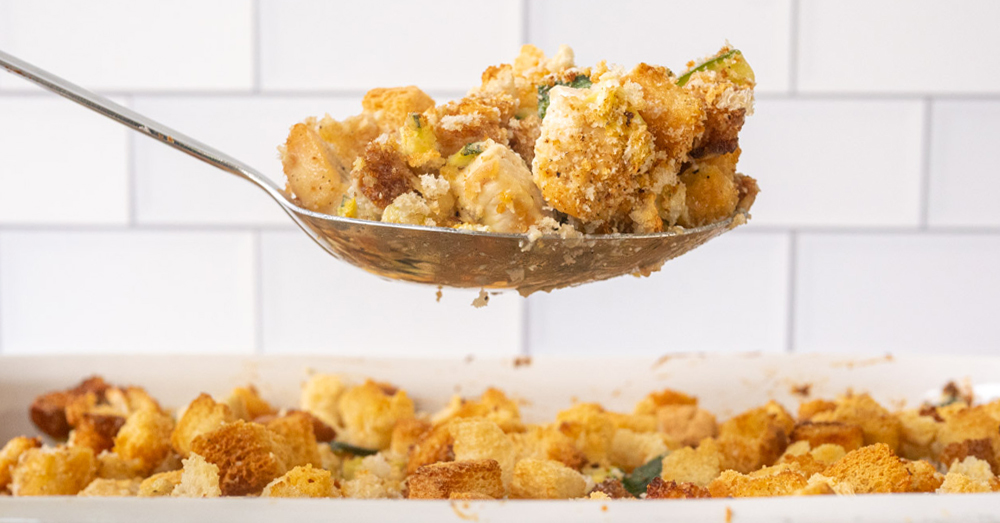 Global Banner: Recipe Contest
Submit your family's favorite Thanksgiving side for a chance to win prizes and have your recipe featured! →

Simple to make, easy to love.

What do you get when you combine stuffing mix, chicken, and zucchini and wrap it all up in a creamy base? One irresistible casserole, that’s what. Our Chicken Zucchini Casserole is one of those dinners that’s super easy to throw together yet always satisfies (and it’s a great use for leftover rotisserie chicken or summer’s squash bounty). It’s comforting and filling, but the zucchini keeps it from feeling too heavy and the savory combination of stuffing seasoning and our from-scratch Cream Soup Substitute is the stuff casserole dreams are made of.

This uses a package of stuffing mix, but that’s the only kitchen shortcut it takes even though it’s still very easy to throw together. See, the sauce portion is our Cream Soup Substitute, which is our quick and easy homemade version of ‘cream of whatever’ soup, and it still turns out the same deliciously creamy end result. If you’re extra pressed for time, you can swap in one 10.75 oz can of creamed condensed soup for the sauce portion, but it’s really no trouble to make it like this, promise.

After making the sauce, you mix it with the stuffing and melted butter, some chopped zucchini, onion, and cooked chicken, and a bit of sour cream. It’s only a few ingredients, but they play very very well together. (And luckily they’re ones you might often have on hand!)

The stuffing gets nice and crispy on top, but in the layers below, it absorbs much of that creamy mixture for a softer chewy bite.

All that is to say it’s an easy casserole with a ton of texture and flavor. I don’t know about you, but that’s the kind of weeknight dinner option I’m always looking for!