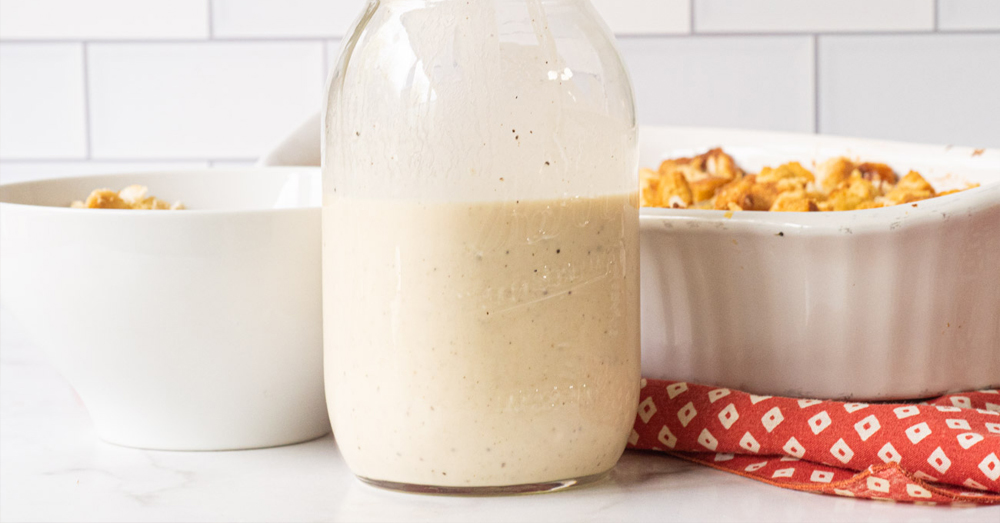 Global Banner: Recipe Contest
Submit your family's favorite Thanksgiving side for a chance to win prizes and have your recipe featured! →

Avoid the can and use this substitute in all your favorite recipes!

It’s no secret that here at 12 Tomatoes, we don’t shy away from using ‘cream of whatever’ soup as a kitchen shortcut in casseroles from time to time. It’s quick, it’s easy, and it makes for one creamy casserole, but we can certainly appreciate that sometimes a cook wants to control all of the ingredients going into their food. (And the amount of sugar, fat, and sodium!) Our Cream Soup Substitute lets you do just that – it’s a quick homemade stand-in that gives you the same creamy end result, but has none of the yucky stuff you might want to avoid from a can.

This only takes a few minutes to make, but you can make a big batch and freeze it in portions so you always have it on hand when the casserole craving strikes. It’s easy:

You start by melting some butter and then whisking in some flour (in other words, making a roux)…

… and then you stir in chicken broth and milk and let it bubble until it’s nice and thick. You can season it just with salt and pepper, or if you’re looking for a cream of celery soup you can throw in some celery salt instead.

And that’s it! One batch of this is equivalent to one 10.75 oz can of ‘cream of whatever’ soup and all you need to do is stir it into your recipe just as you would the canned soup. It’s versatile, it’s simple, and it lets you have a healthier homemade option for creaminess in all of your favorite casseroles!