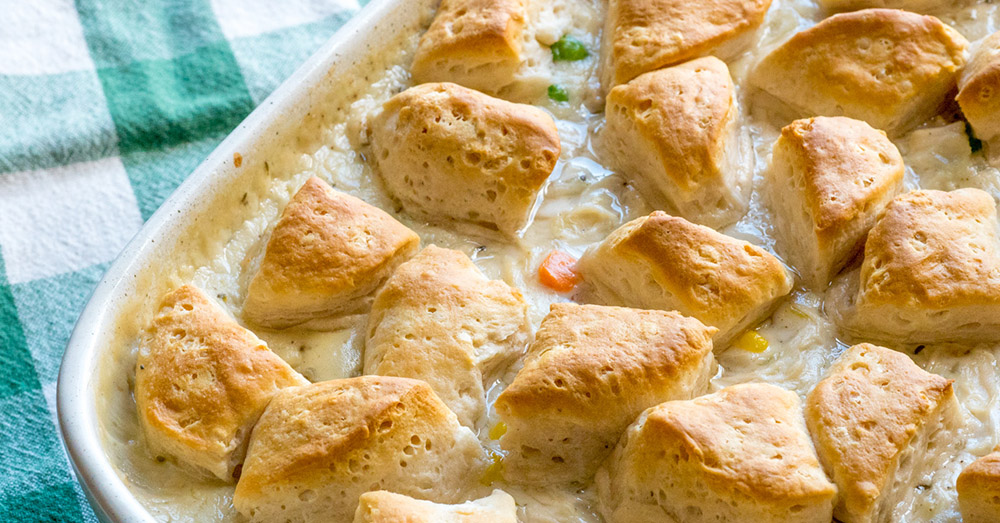 An easy version that works on even the busiest weeknight.

I’ve always been a big fan of Chicken Pot Pie. It’s the perfect comfort food – a bubbly, somewhat creamy sauce full of hearty chicken and veggies topped with a flaky crust. But it’s not the quickest thing to make. This “cheaters” version uses a couple of shortcuts (don’t worry – no cream of whatever soup!) for a much easier version with all the same delicious flavors. It’s just as comforting, just as tasty – it’s just much easier on the cook!

Instead of chopping and sauteeing a bunch of different veggies, you only have to worry about chopping and softening some onion here.

And then you build a quick and creamy sauce by stirring in some flour, broth, cream, and thyme. It takes just a few minutes and it’s so much more delicious than relying on a can of cream of chicken soup as a shortcut.

Once that’s thick and bubbly, you stir in cooked chicken (leftover rotisserie, anyone?) and a bag of frozen mixed veggies. Using a bag of frozen veg saves you a ton of chopping time, and it’s not an instance where you’ll miss fresh produce.

The biggest time saver here is in the “crust.” Instead of going to the trouble of making pie dough, we use refrigerated biscuit dough! It’s a little bit doughier, sure, but you still get that nice flaky bite to back up the creamy sauce below.

You just cut each biscuit into quarters and scatter them over the filling.

As the filling gets nice and bubbly in the oven, the biscuit topping gets beautifully golden brown.

It has all the same things you know and love from a traditional chicken pot pie – a comforting golden brown carbalicious topping with a creamy and delicious base – it just happens to be a whole lot easier to throw together. It makes pot pie much easier to work into busy weeknights. And having more pot pie in your life is never bad news!