8 Kitchen Items We Always Look Out For At Thrift Stores 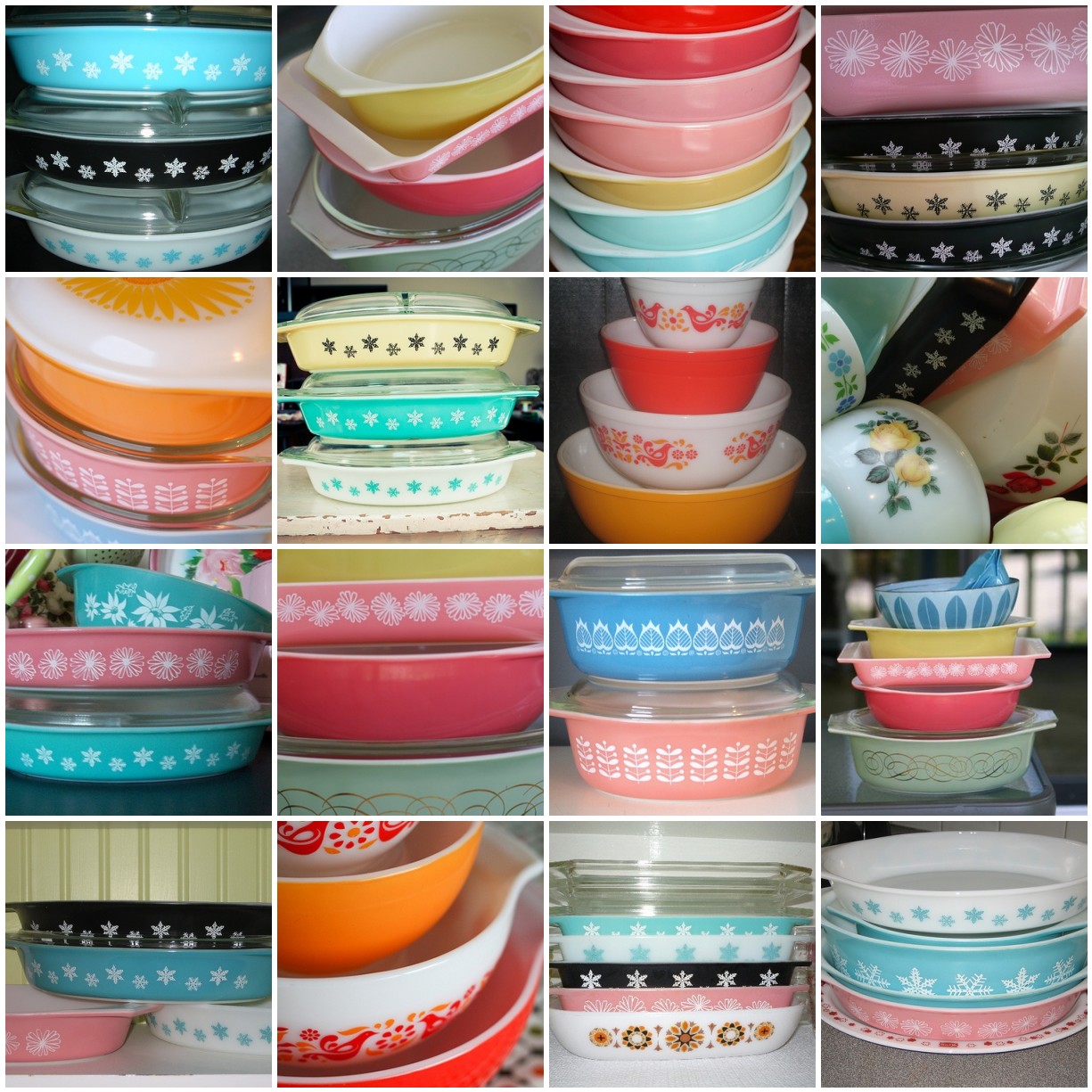 If you’re anything like us, you’ve got that special something that you keep an eye out for anytime you go shopping. Whether you’re thrifting, combing through estate sales and scrolling through online auctions, you know there are treasures out there and that you don’t want to miss them! Here, we’re taking a closer look at eight items you should always buy when you see them at a store. Whether it’s a famous brand that everyone’s clamoring for, or a unique piece that’s over 100 years old, here’s the breakdown on what to look for. Happy hunting! 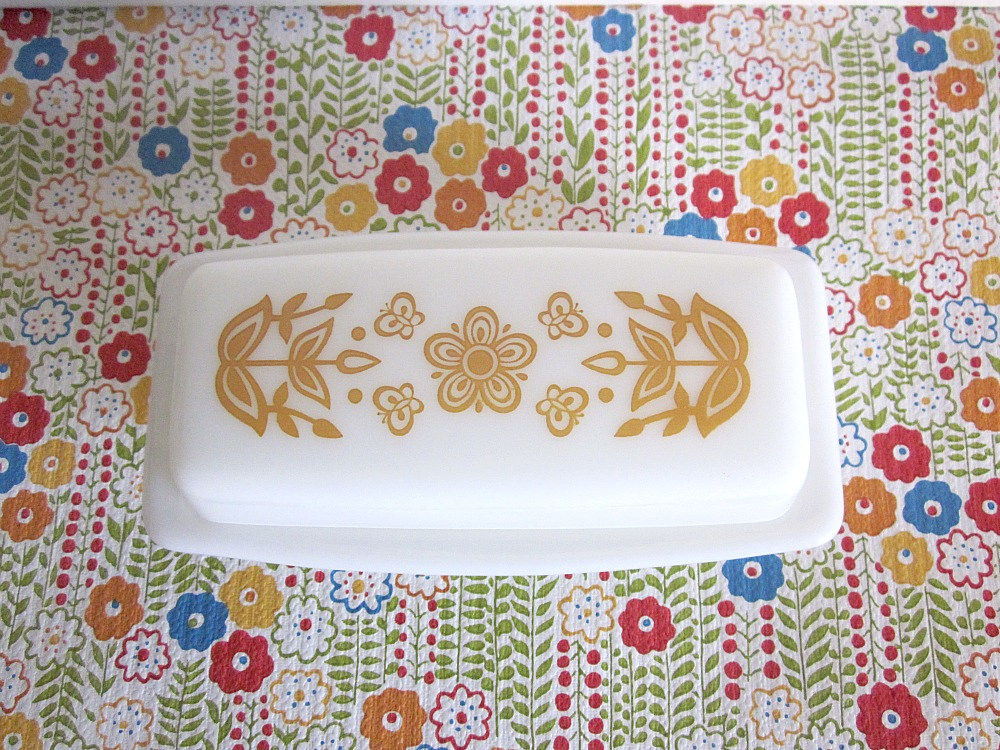 A huge collector’s item that’s been around since 1915, vintage Pyrex dishes used to be made out of borosilicate, making them super durable and super adorable to boot, with gorgeous colors and detailing on each new line. Be warned: once you start collecting them, it’s extremely hard to stop. Many people find these vintage versions to be better than modern day Pyrex (which is instead made out of thermal resistance tempered glass) and take to scouring thrift shops, estate sales and the world wide web to get their hands on “one more piece” to complete their set. 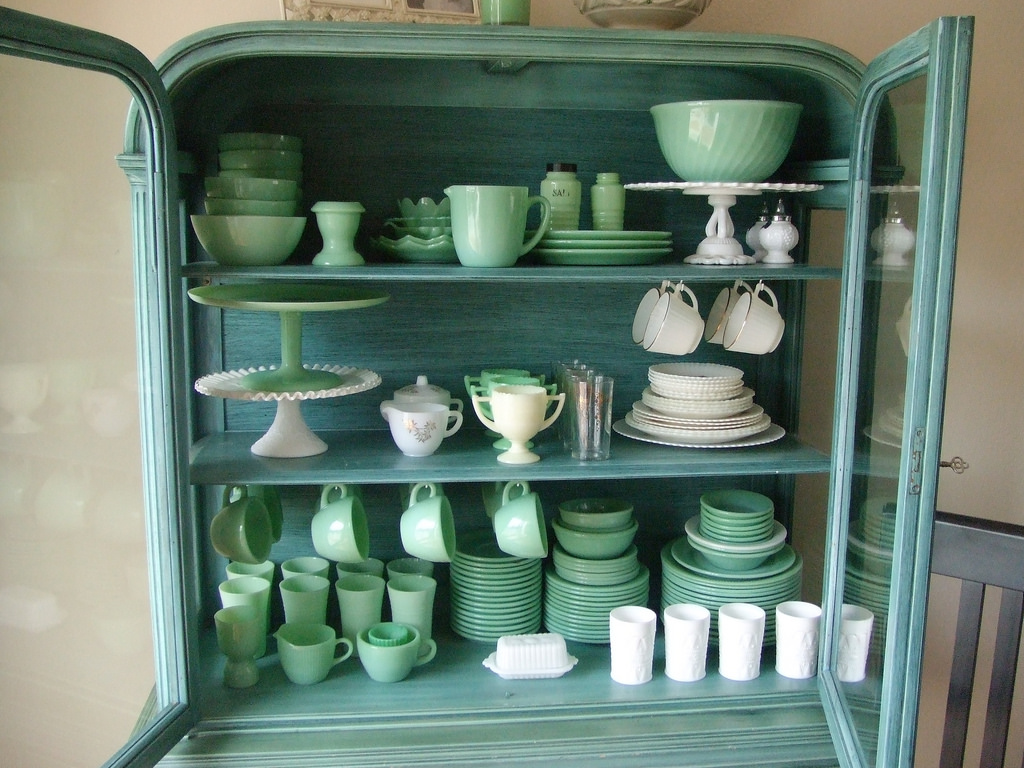 Similarly popular because of its durability and ability to withstand high temperatures – and its amazing color – Jadeite (a.k.a. Jade-ite) was produced during the 1930s, literally as a way to introduce more color and joy into people’s lives during the Great Depression. While many companies produced jadeite at one point, the top three companies were (and remain) McKee Glass Company, Jeannette Glass and Anchor Hocking Fire-King. 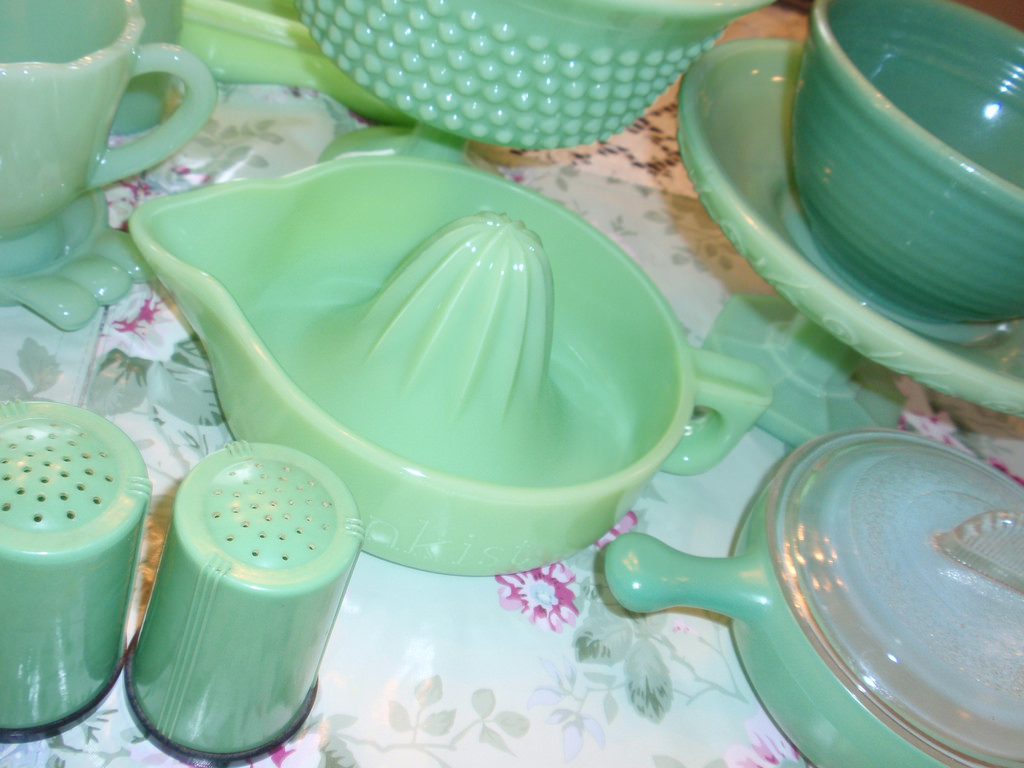 If you see any jadeite while you’re out shopping, look and see if there’s a manufacturer’s mark anywhere on the piece; McKee will have “McK” inside a circle, Jeannette will have a “J” inside a triangle, and Anchor Hocking pieces will have a “Fire-King” logo of some sort. Pro tip: if it’s truly vintage jadeite that was made before WWII when uranium was still used in manufacturing, it will glow under a black light!

What is Bakelite? Well, it’s a bunch of things, really. Named after Leo Baekeland in 1907, Bakelite product was made out of carbolic acid and formaldehyde, making it the first thermosetting plastic – a material that won’t bend, warp or melt once formed. Since it is such a versatile material, it was used to create tons of different products, ranging from electrical insulators (the original purpose of the company) to kitchen tools to jewelry. 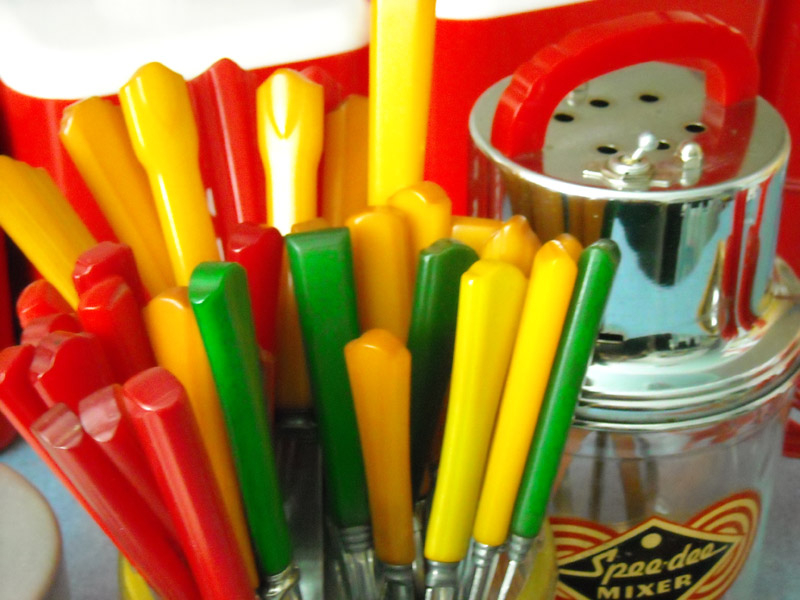 If you’re ever planning on going on a Bakelite hunt, make sure to come prepared; if possible, the swab test is one of the most accurate ways to test true Bakelite. Bring along a bottle of 409 and some cotton swabs with you, as rubbing a small area of potential Bakelite with a swab dipped in 409 will result in a yellow smear leftover on the swab or Q-tip. If you’ve already got items at home that you think might be Bakelite, another option is to run a small part of the plastic under hot water for 30 seconds. It it’s real Bakelite, there will be a distinct smell, similar to paint remover, indicating its authenticity. 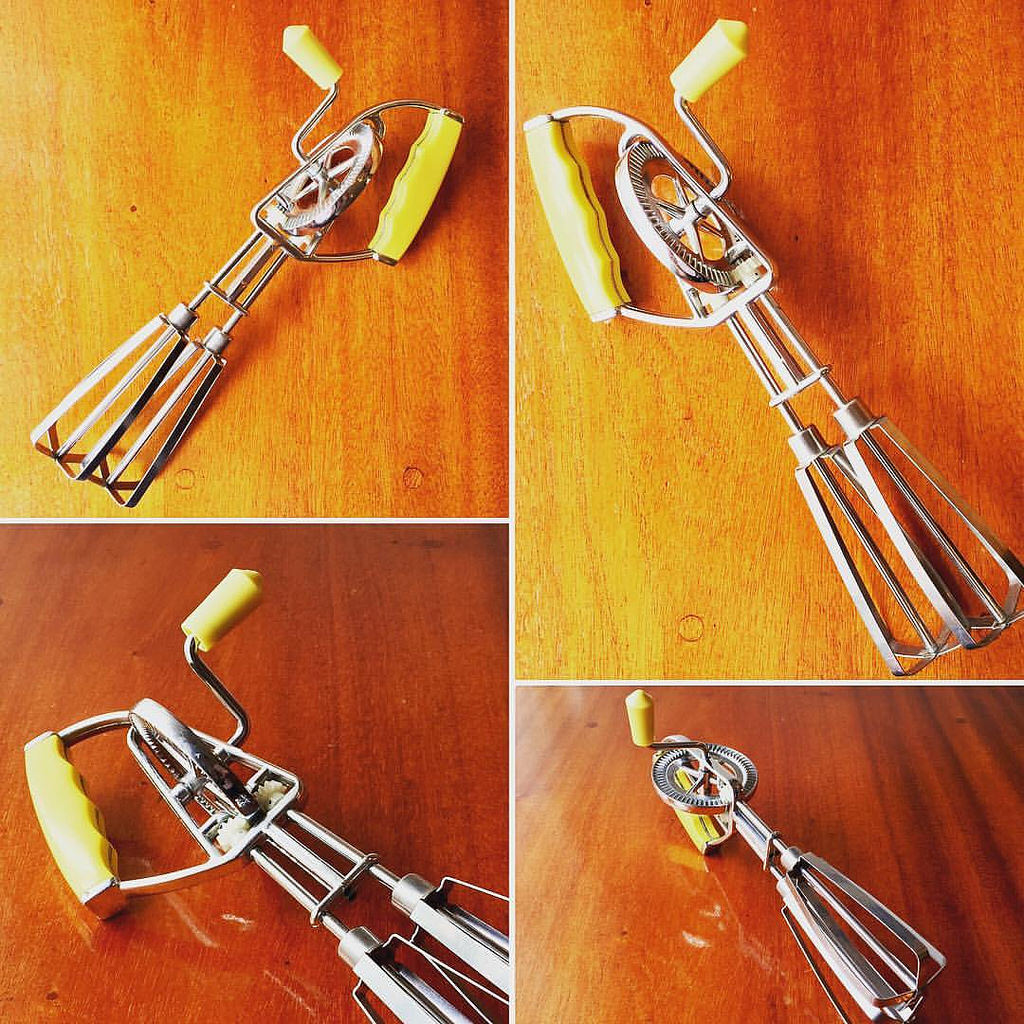 Considering that there are pieces of Bakelite originally sold for $250 that now retail for over $3000, this is definitely a vintage find that you don’t want to pass up. Now that you know what to look for, you can keep your eyes peeled and add to your kitchenware or jewelry collection. 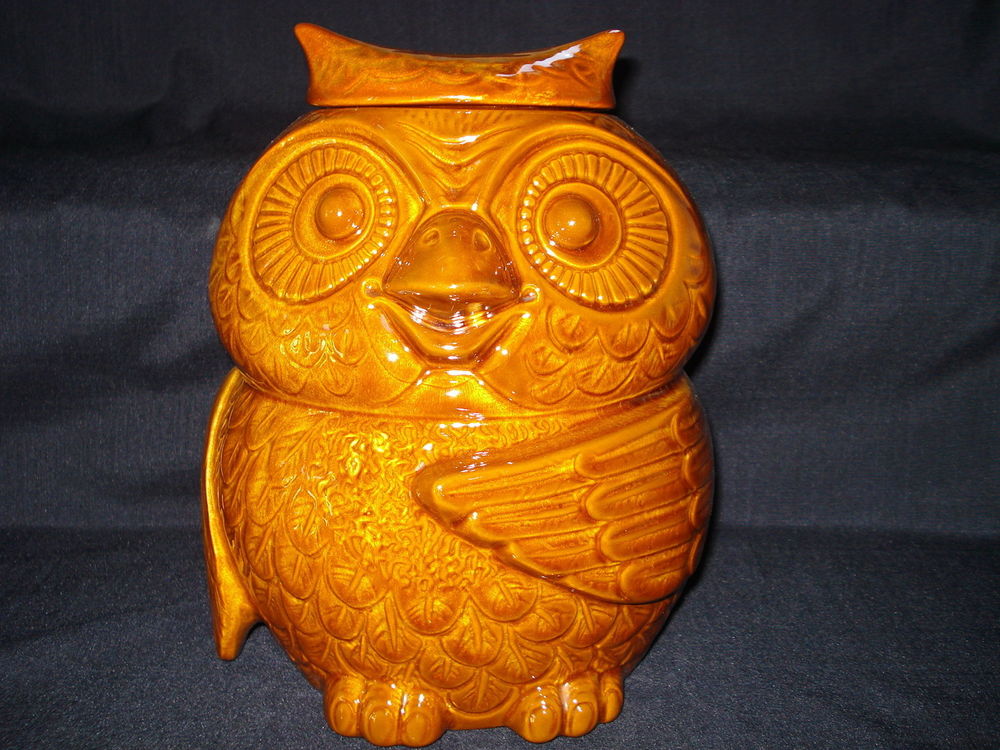 McCoy stoneware, of the Nelson McCoy Sanitary Stoneware Company (est. 1910) is probably most famous for its cookie jars. Even though the company closed in 1990, their decorative cookie jars are still some of the most sought-after items when it comes to vintage kitchenware, retailing for thousands of dollars at auction. They started producing said cookie jars in the 1930s, and it was the fun designs that caught people’s eyes and made them a staple in people’s homes; whimsical figurines (e.g. carousels, penguins, bears, McCoy Mammy, etc.) representing joy and prosperity were what made these classics that are still treasured today. 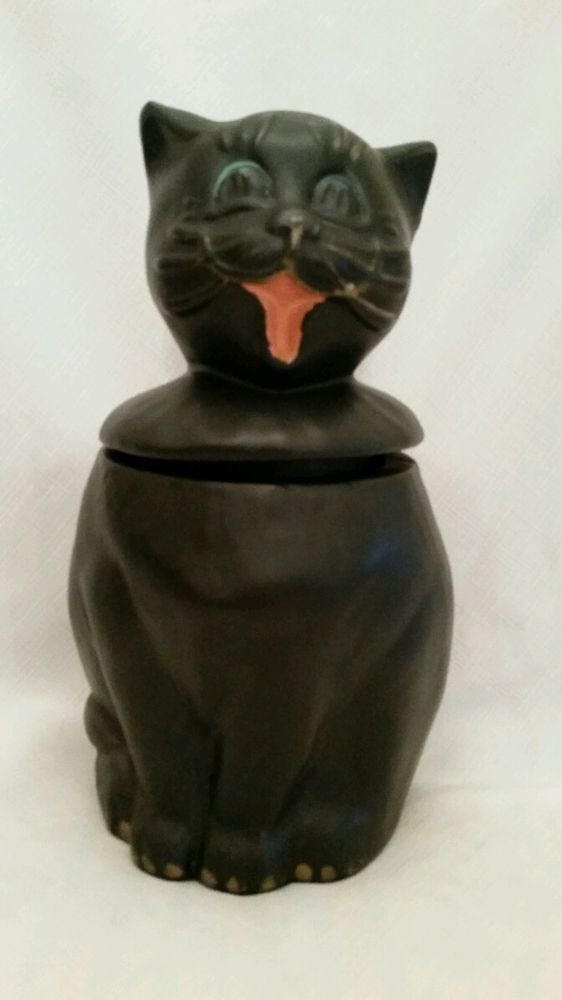 If you’re looking for McCoy pottery while you’re out thrifting, here are some things to keep in mind: have a list of the measurements of authentic products with you for comparison. Reproductions of famous styles will always be smaller than the originals, since the originals are used as the molds and then the clay for the reproduction shrinks when it’s fired. Also, take a look at known McCoy products before shopping. If what you’ve found at the thrift shop or estate sale doesn’t match any known products, it’s probably not authentic. 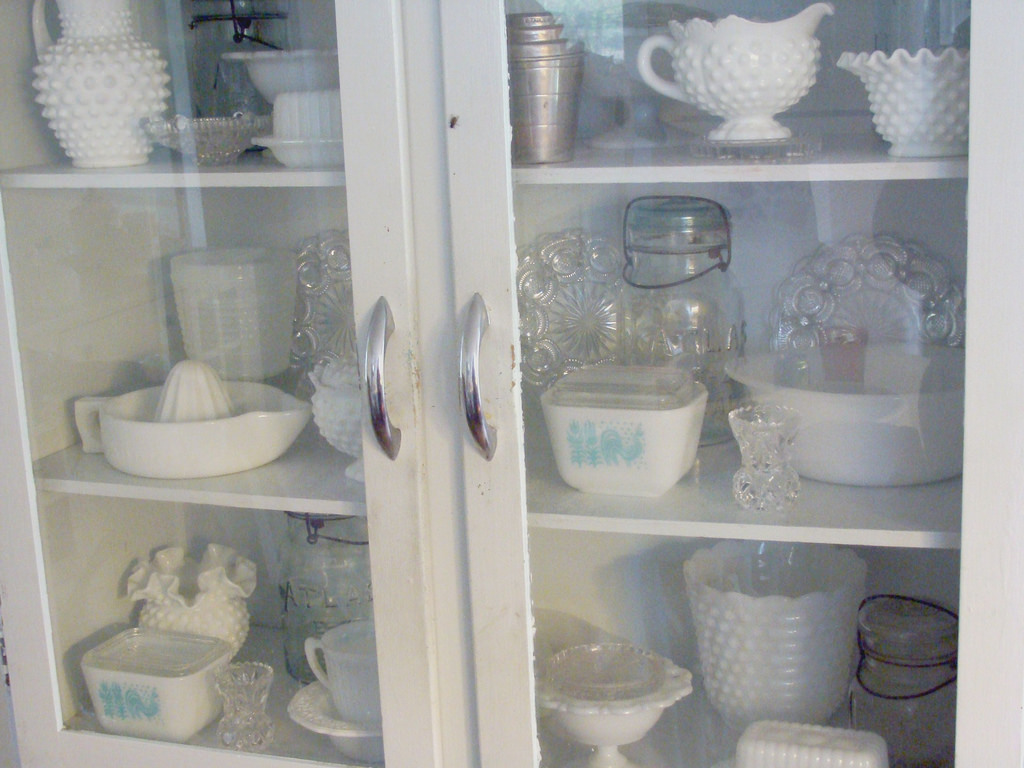 Milk glass was actually produced around 300 years before it reached the height of its popularity, which began around 1870 and lasted through the early 20th century. When it came to milk glass, the French were the trendsetters, ushering it into its golden era and inspiring American glassmakers to follow suit. Today French milk glass is particularly valuable. Emulating the French, well-to-do American families stocked up on milk glass dinnerware, serving dishes, and pitchers. The pieces, some bedecked with diamond-cut patterns, molded with latticework, or artfully painted, made a splash in turn-of-the-century America and remained popular until the days of the Great Depression. They came back into vogue during the 1960s thanks to the production of Hobnail milk glass, but fell out of the spotlight shortly thereafter. Some of the more American popular milk glass manufacturers include: Gillinder & Sons, Indiana, Westmoreland, New England Glass Company, Atterbury & Company, Bryce Brothers, and Fenton.

Milk glass is (quite literally) a centerpiece of American history, and today collectors gush over rare and one-of-a-kind pieces that highlight the nation’s past. Prominent figures often had milk glass produced in their honor, whether it was the bust on a casserole dish or a relief on a serving platter. If you’re a history buff, keep your eye out for plates featuring a border of 13 stars and George Washington’s likeness. Also of great fascination are the milk glass plates that launched the 1908 presidential campaigns of William Howard Taft and William Jennings Bryan. There’s even a rare platter featuring a Lincoln relief so ornate it’s speculated that the piece was part of dinner service at a commemorative event. 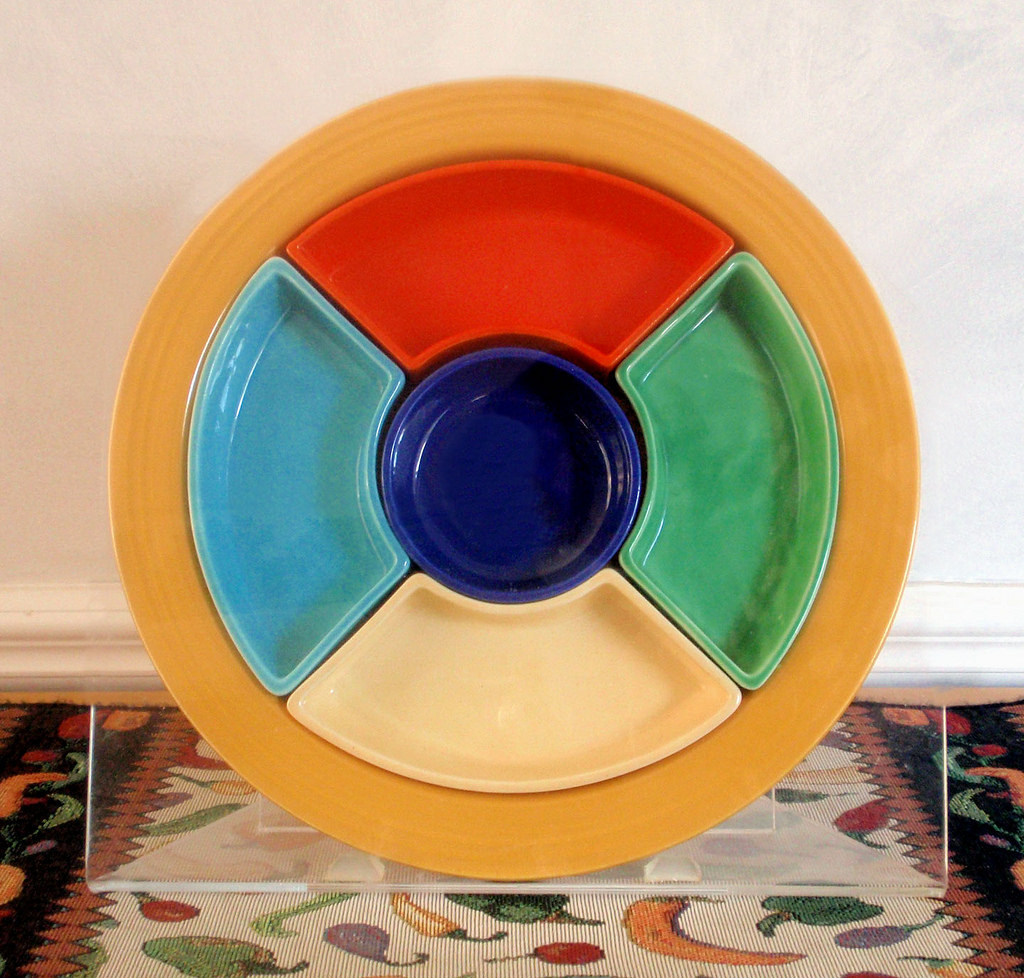 First produced in 1936 by Fredrick Hurten Rhead of Homer Laughlin Pottery Company, the Fiesta (a.k.a. Fiestaware) line was a bright, bold, Art Deco-inspired line of kitchenware that was durable and injected life and color into people’s kitchens. While having experienced soaring popularity initially, production of the line was temporarily halted between 1973 and 1985. However, that didn’t stop it from being one of, if not the most popular line of dishes in the United States in the past 100 years. 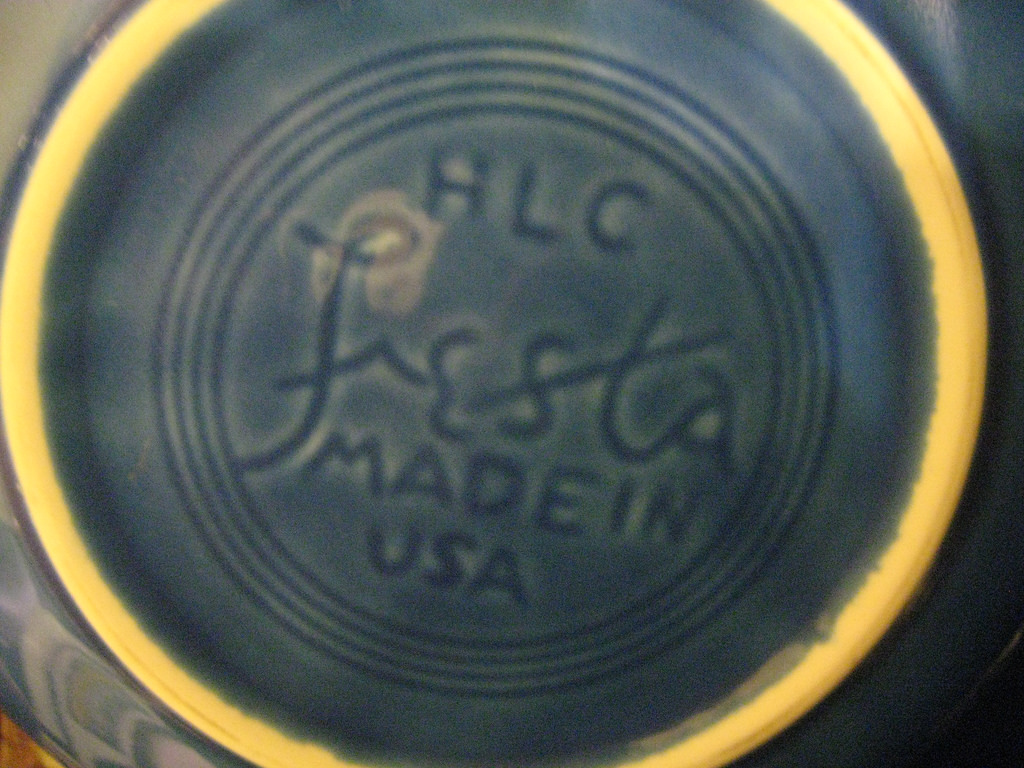 While Fiestaware is still being produced today, the rarity of certain colors (e.g. original yellow and medium green) will drive up the price of those products in comparison to the same item in a more common color. Likewise, more uncommon pieces such as the relish plate sets or the tiered Deco candle holders can be far more expensive than standard, place-setting counterparts, due to their scarcity. Thankfully, there’s plenty out there still to be found, so if bright and colorful is your jam, Fiestaware is definitely the thing to snatch up when you see it at the store. 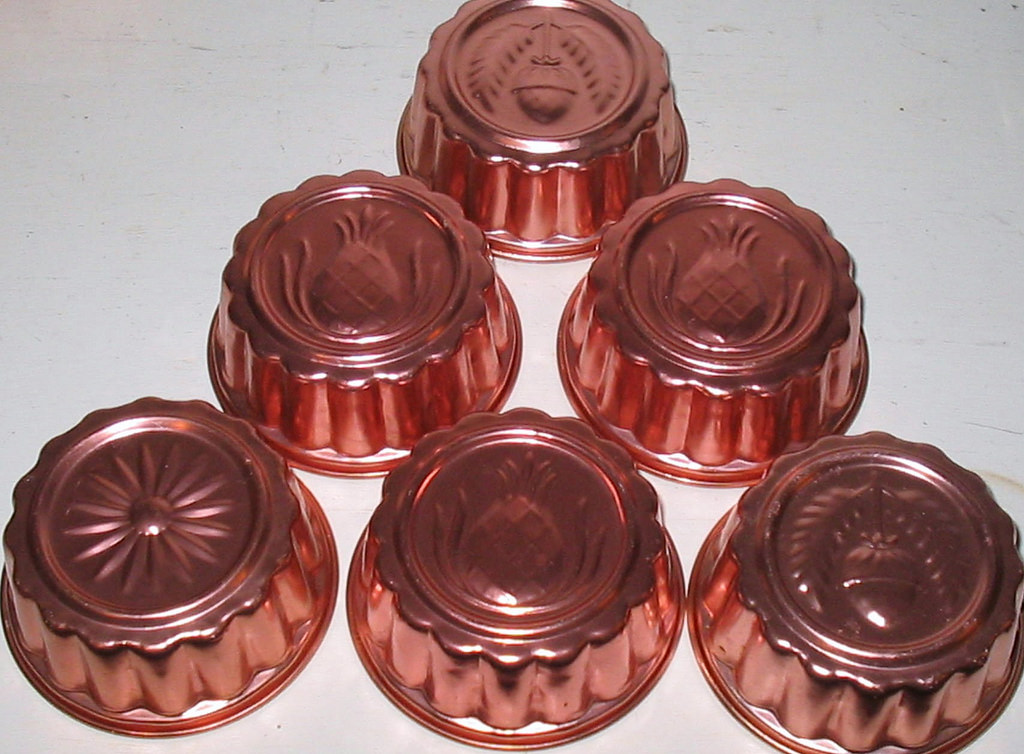 Popular in the late-19th and early-20th centuries, copper or tin molds were used in myriad ways. For the more affluent, copper was the material of choice, since it conducts heat more evenly than tin, plus makes for excellent decor when not in use; tin was used more commonly since it was more affordable, incredibly versatile and one could still get the same level of detail in the mold as the copper version. 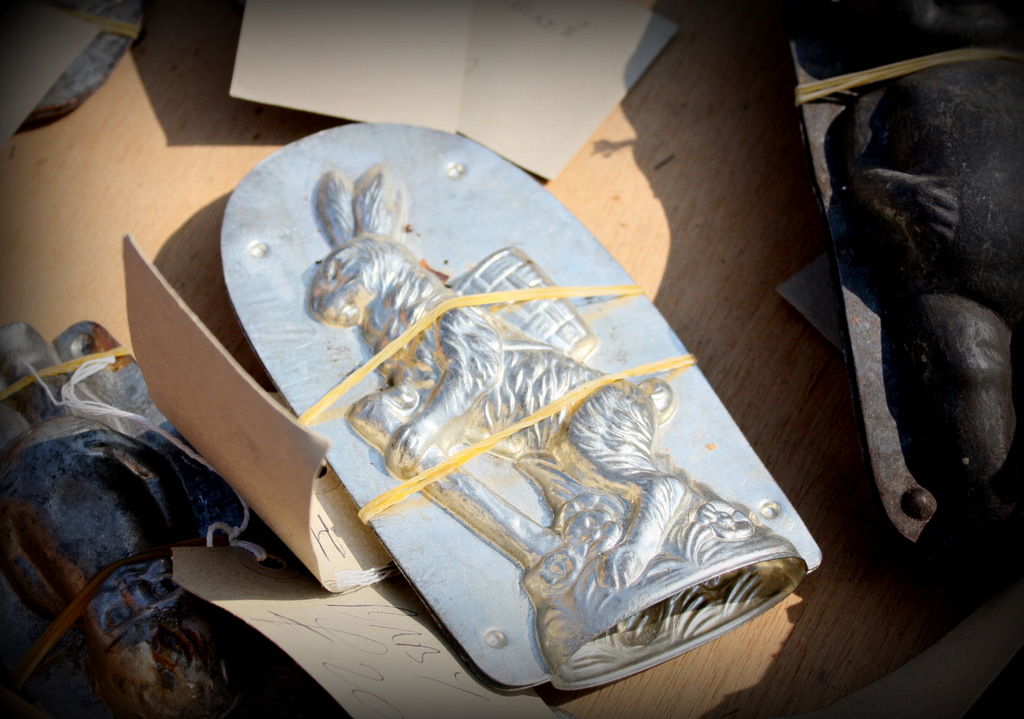 If you’re thrifting and spy a kitchen section overflowing with molds, keep an eye out for versions that are more intricate or differently-shaped than typical versions today. Not only were molds for cakes popular, ones where you would pour a batter in and then pop it in the oven like a standard bundt, but molds with removable sides were common for making raised pies, as well as molds that have lids to close and trap in heat and steam. It’s always a safe bet (if affordable) to grab any tins you find if they’re unique in detail and/or have functional lids.

Remember: copper is only slightly magnetic, so if you have a magnet you can bring with you while you shop, you’ll be able to test any metal you find. It’s only copper if there’s no effect when you hold up the magnet (unless it’s a very strong magnet, in which case there might be some pull). 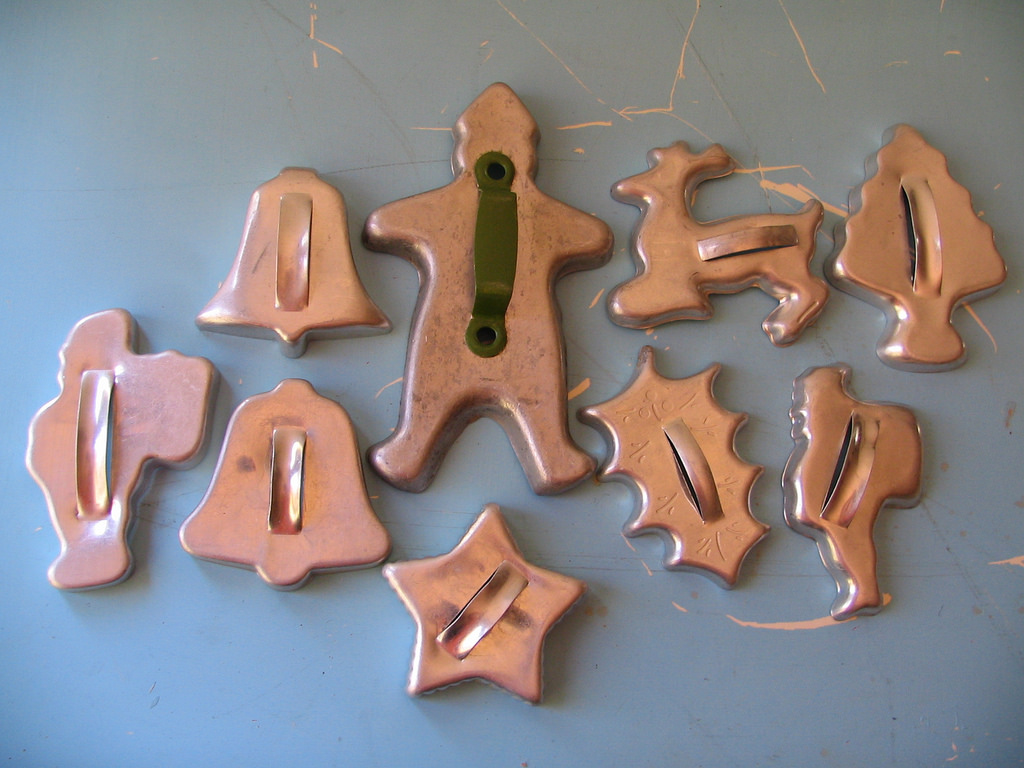 Similar to molds, you can find some cookie cutters that are still extremely valuable these days, sometimes hundreds or thousands of dollars! Copper, tin or aluminum cookie cutters can be good finds, and again, you’re looking for intricate designs that differ from standard cookie cutter sizes: so either really big or really small. Aside from the material, you should keep an eye out for cookie cutters with flat wooden backs, or with (painted) handles…if you’re lucky, you could find one dating back to 1850 or earlier!


While there are plenty of vintage gems out there waiting to be found, it helps to have a more condensed round-up of brands or items to look for before you start your search. Hopefully you find this helpful and you’ll be one step closer to completing the vintage kitchen collection of your dreams!

10 Popular China Patterns and How to Find Them!: Click “Next Page” below!