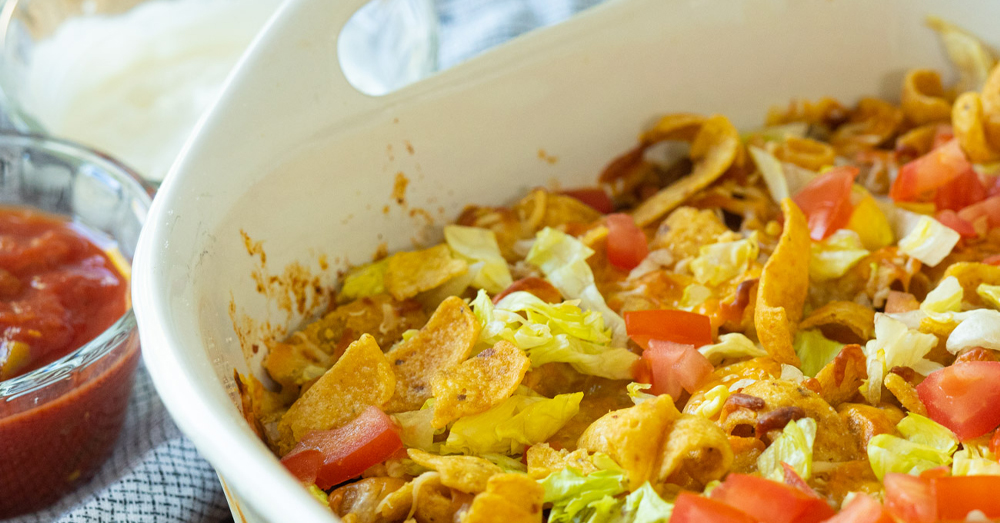 Because chips in a recipe is always a good plan.

Who out there is a fan of the walking taco? You know the genius idea where you take a bag of chips, stuff it with your favorite taco fillings and then eat it with a fork? A portable bag of crunch and taco goodness for the win! Well, as we are wont to do here at 12 Tomatoes, we’ve taken that same concept and translated it into a casserole. You still get crunchy chips, you still get plenty of beefy, zesty taco deliciousness, you just get it out of a casserole dish! And while this version might not be quite as portable, it’s a comforting dish that everyone loves just as much as the original.

Our casserole starts with ground beef and onion that are browned up with a generous amount of taco seasoning for plenty of zestiness. We also stir in some cream cheese and green chiles to liven things up a bit. That gets spread in a casserole dish and then topped with a layer of corn chips.

You could use Doritos as some do with walking tacos, but I’ve always been partial to Fritos in this application. After a layer of cheese is added, the dish bakes for about thirty minutes and the cheese gets nice and melty and the chips absorb some of that beefy flavor.

Once it comes out of the oven, you top it with more chips and some lettuce, tomatoes, sour cream, and salsa (or whatever your heart desires) and dig in! It’s all the same components as a walking taco, but with a little extra going on. It’s sure to become one of your family favorites!