8 of the Most Valuable Kinds of Pressed Glass

Despite the recent trend for retro designs, pressed glass remains one of the most undervalued types of glass out there. When compared to cut glass, which it is often imitating, pressed glass rarely brings in big bucks. Pressed glass is often found for very cheap and even antique pressed glass can go for just a few dollars. But, as with everything, there are a few examples that stand out from the rest. Here are 8 antique and vintage pressed glass styles that are actually worth a little money! 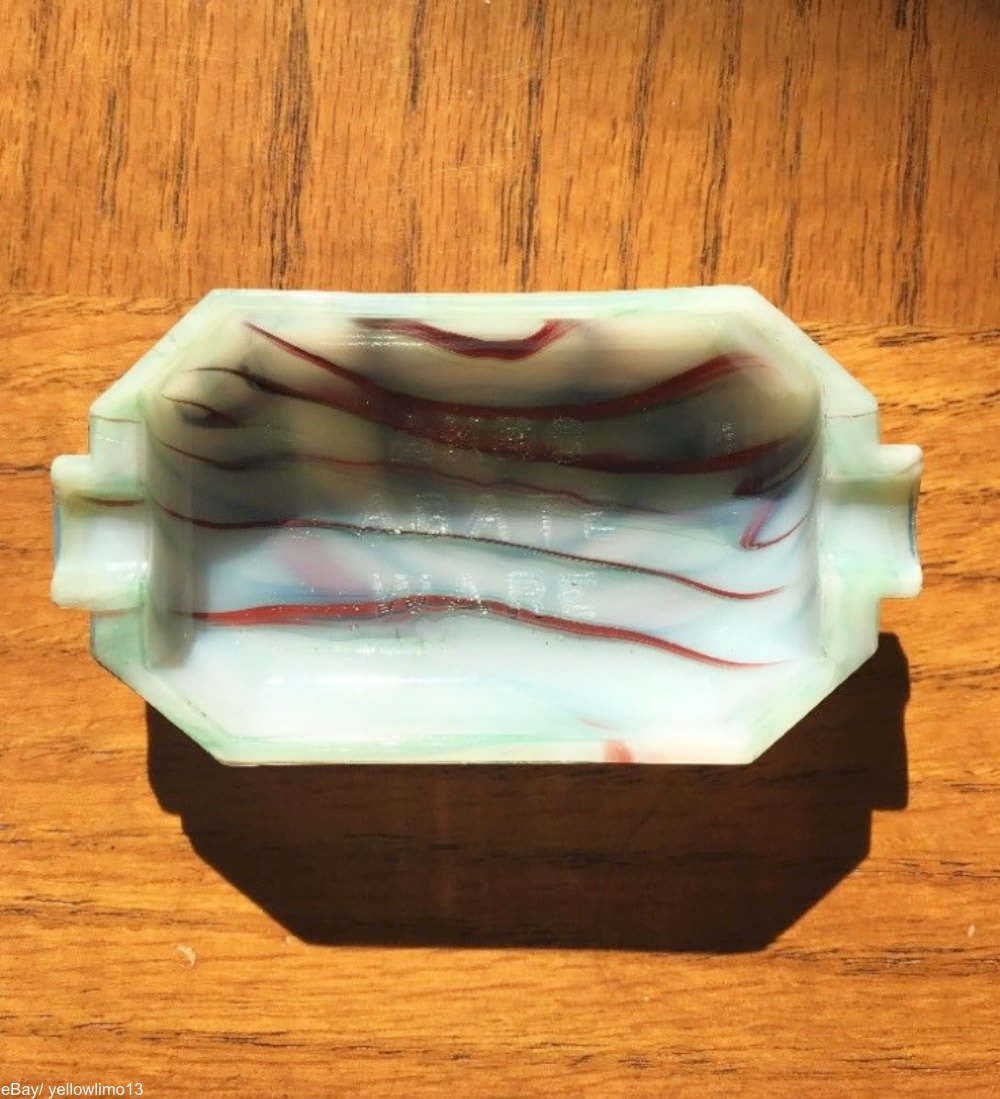 This lovely type of glass differs from milk glass in that it is often tinged with blue, though can come in other colors. The term originally referred to hand blown French and Italian glass, but is commonly used to describe 20th century pressed slag glass pieces as well. A Fenton opaline cookie jar recently sold for $300, and smaller pieces of pressed opaline glass can fetch around $50. 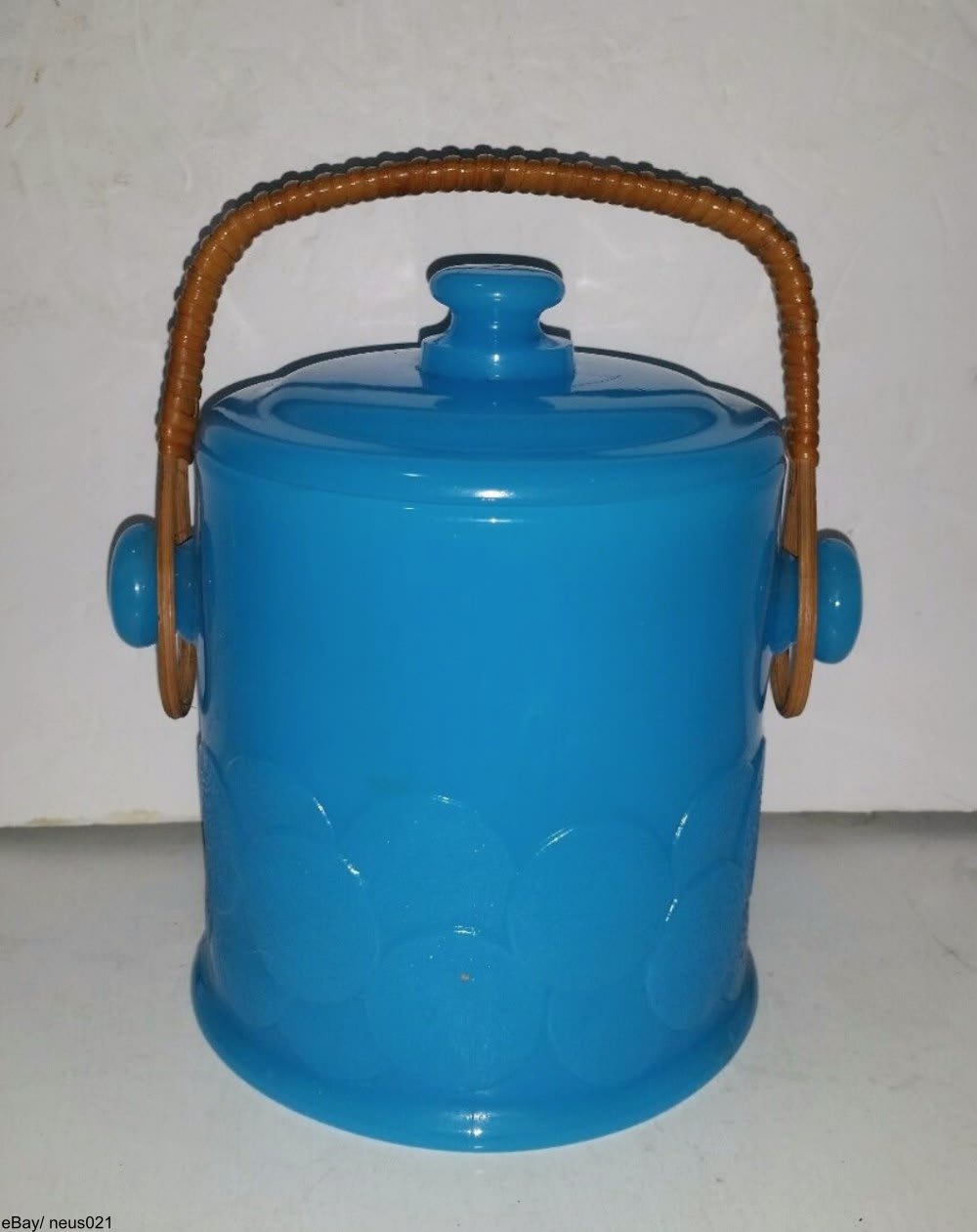 These figural pieces often depict majestic creatures or classical figures on pedestals, which came as pairs with which to decorate one’s mantlepiece. Derbyshire also produced vases and other decorative items of glass as well. These English pressed glass pieces date from the Victorian era, and can sell for between $30-$130 or more. 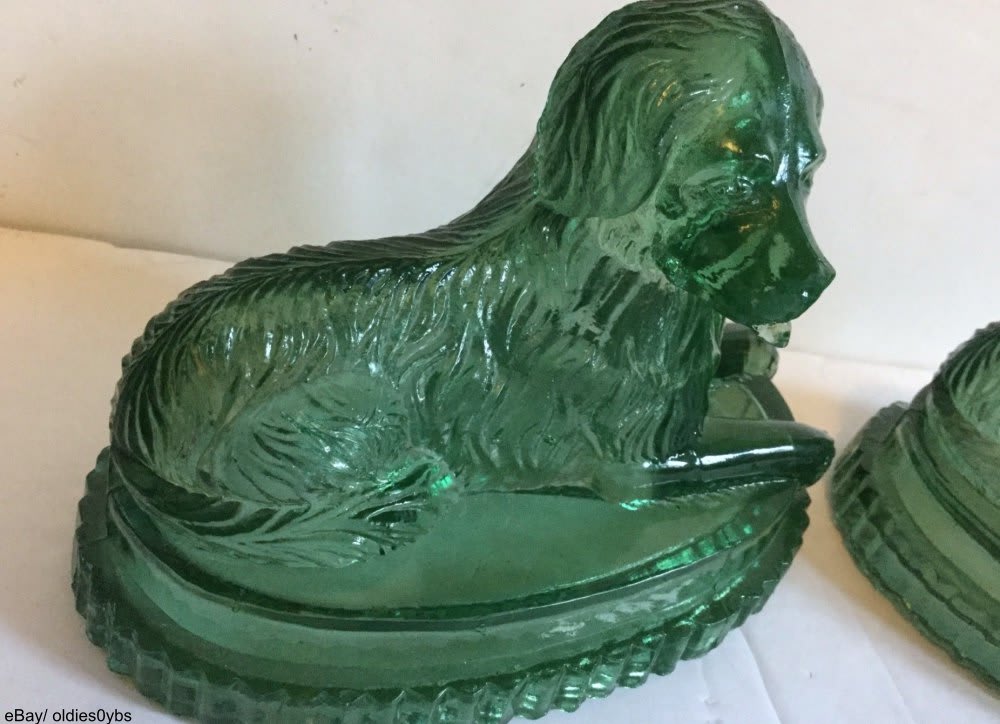 When Jumbo the elephant made his debut with Barnum and Bailey in the U.S. 1882, he was already a favorite in England. In anticipation of the African elephant’s arrival and tour, many types of glass pieces were made. Candy dishes, goblets, cruet sets, and salt and pepper shakers are among the many pieces created for this event. A set of 6 Jumbo goblets sold in July 2018 for $3,000 and a cruet set recently sold for $400. 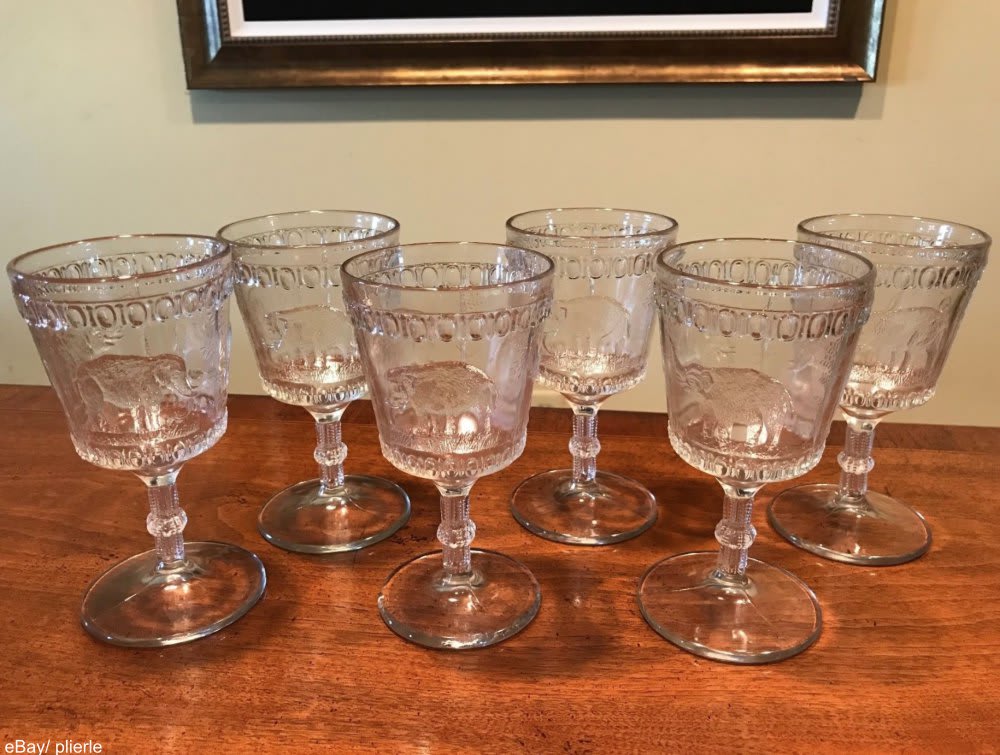 Pressed glass pieces (like scoops, candy dishes, straw holders, and large medicine containers) speak to another era when the drugstore served as malt shop, candy store, and dispensary all in one. Often these items are clear, but can also be brilliantly colored to grab the customer’s eye. A green Illinois Star straw holder recently sold for $800, but apothecary jars tend to sell for $30-$200 or more. 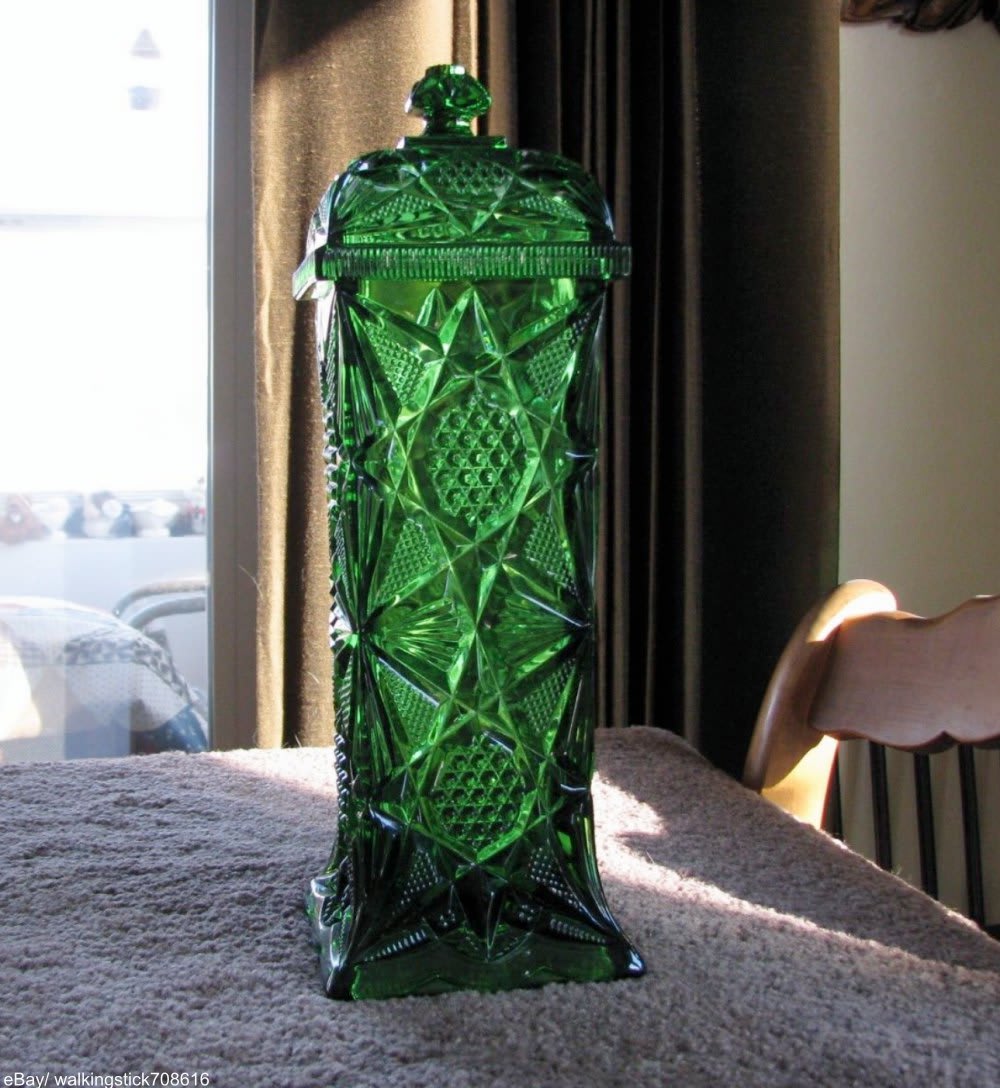 Good old jadeite has been beloved for generations for it’s glowing pale green color. Jadeite was a staple of the kitchen for many women from the 1930-50s and has a classic look which many collectors find very desirable still. Jadeite is one of most functional items of vintage glass since most pieces hold up well over time. Today, rare mugs can go for hundreds of dollars, while smaller pieces like salt and pepper shakers and saucers command more modest prices. 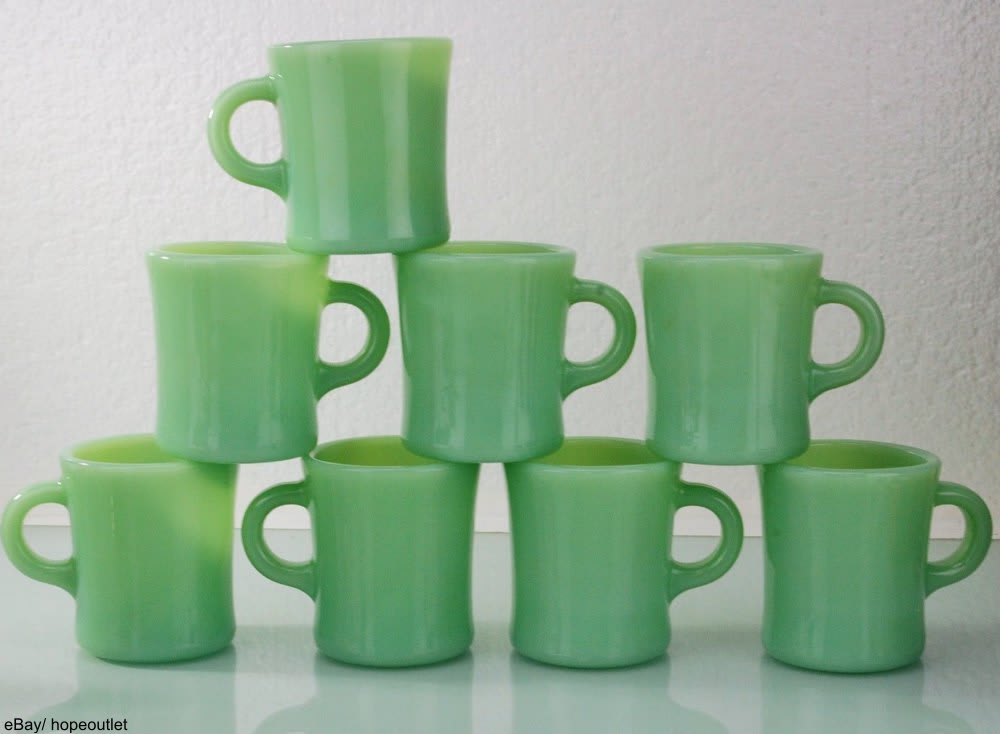 This type of glass gets its nickname from its unique translucent petroleum jelly color. The yellow-ish tint comes from the addition of uranium oxide while in the molten state. Production dates for the most vibrant pieces range from the 1880s to the 1950s. After 1958 only depleted uranium was used in the production process, which resulted in a different color. Today, prices can vary wildly, but more elaborate pieces and sets can sell for upwards of $1,000! 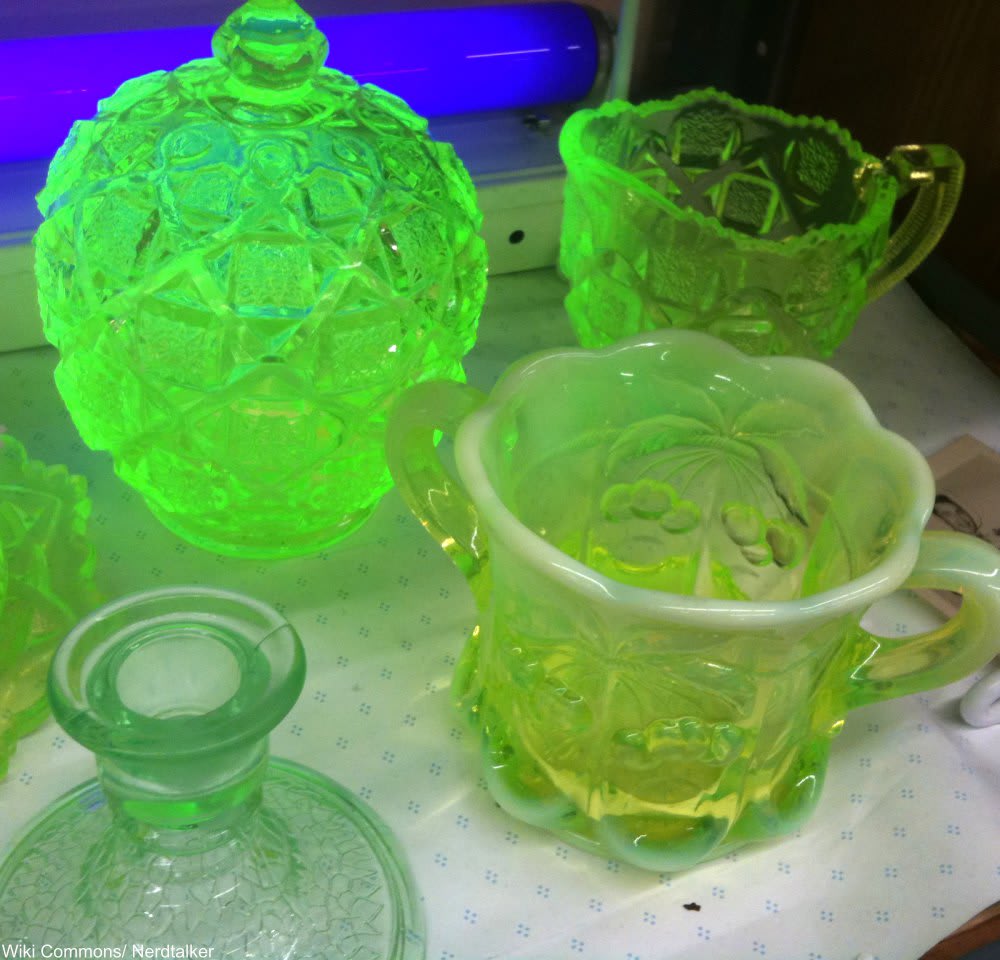 Like Vaseline glass, custard glass has a yellowish cast from uranium. However, this opaque glass was often made in different styles from Vaseline glass. The pieces from the 1930s, like salt and pepper shakers and rolling pins, are styled much more like their contemporary Jadeite counterparts. However, custard glass was in production from the 1890s, long before Jadeite.

Serving pieces, vanity sets, and kitchen items made of custard glass can sell for $20-$300 depending on rarity. Beware though, there have been many reproductions made over the years! 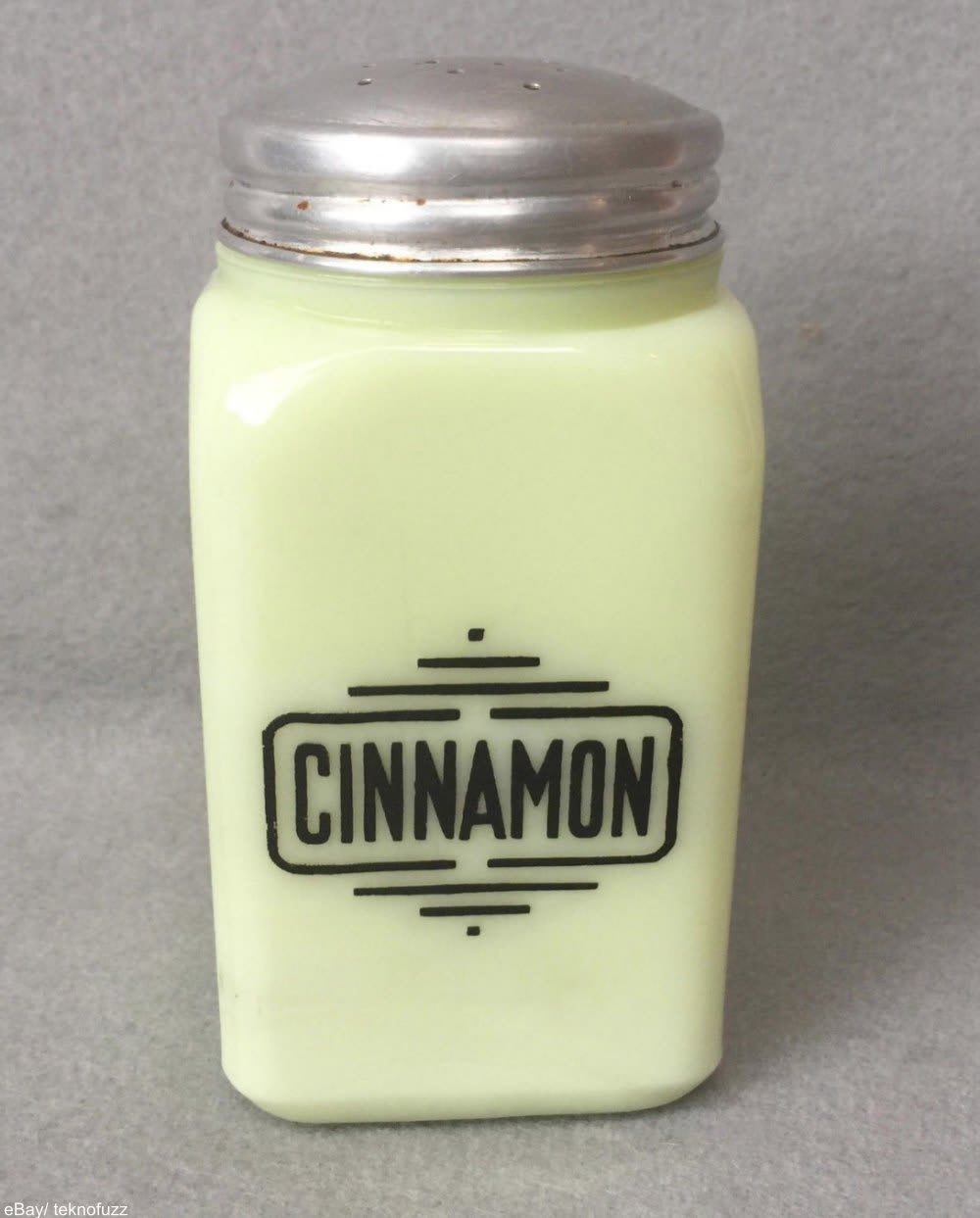 This iconic glassware is opaque and often has a marbled or “agate” color pattern. Because Akro was only in operation for 40 years (1911-1951), their pieces are seen as highly desirable. Pieces came in solid colors as well, like cobalt, cerulean blue, and white. Not only did Akro produce dinnerware and glass accessories for the table, they were well known for their children’s tea sets and their striking marbles. 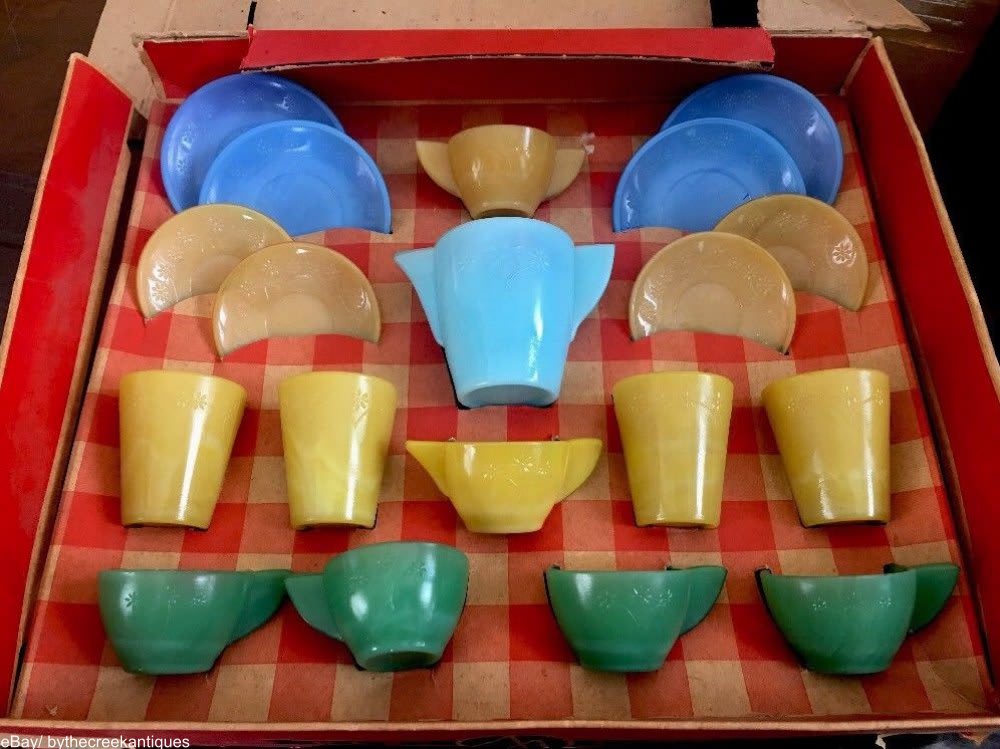