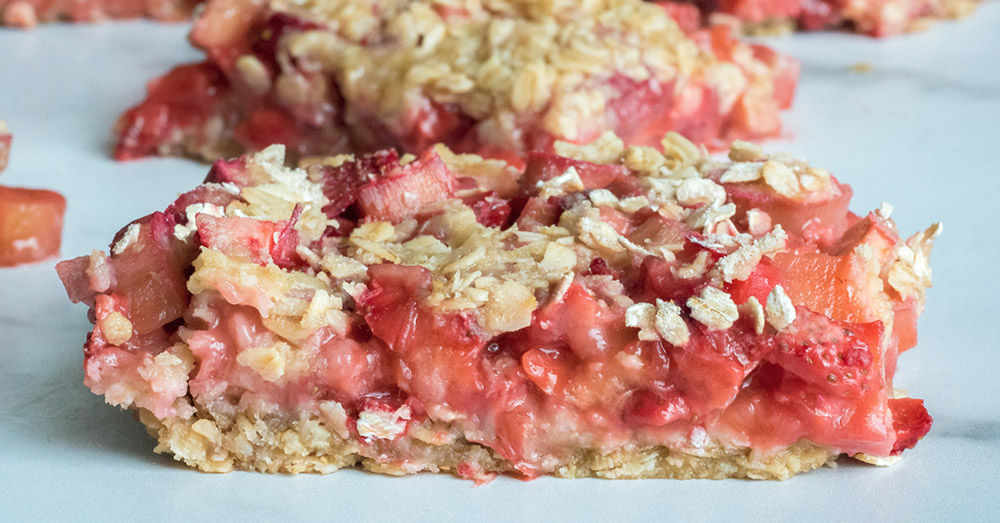 Every season brings with it something that leaves me itching to get into the kitchen to start cooking. For spring, it’s the combination of strawberry and rhubarb. (Definitely tied with asparagus. But I digress). Rhubarb has a painfully short growing season but it’s the perfect tart companion to strawberries’ juicy sweetness so I tuck them into crumbles and crisps and cobblers as often as I can. These bars bring you everything a traditional crisp would – juicy sweet and tart filling with a sugary crisp topping – but in sliceable, grab-and-go form.

I love crisps and crumbles and cobblers because they’re so rustic and forgiving – you can add a little less sugar or tweak the cinnamon and you’re not going to hurt anything. These bars have a little less leeway, because you don’t want oozy fruit or a crust that won’t hold together, but that doesn’t mean they’re any less easy to make.

They have the same components as a crisp – a crumbly mixture of oats, butter, and sugar, and a delicious fruit filling – but in this case you’re dividing up the oat mixture into a crust and a topping.

You press part of the mixture into the bottom of the pan before topping it with that beautiful ruby red filling.

A little more of the oat crumble goes on top and as it bakes the bottom layer forms into a nice solid base.

You’ll want to wait a bit for these to cool before you go about slicing them into squares so they’re not too ooey-gooey. But even when they’ve set, they’re juicy and soft with crisped oat-y edges.

Recipe adapted from The Recipe Rebel.