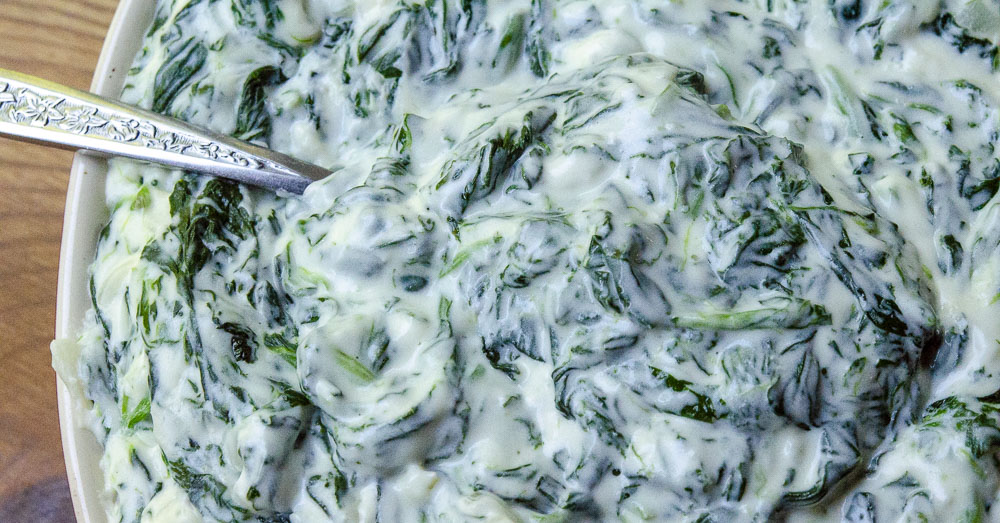 A classic side dish done right.

Spinach isn’t the first vegetable I gravitate towards making but there’s something so nostalgic, so creamy, so delicious about a classic steakhouse version that sometimes I can’t help but crave it. And trust me, this Steakhouse Creamed Spinach is easy to crave — it’s the ultimate creamed spinach, bulked up with not just half and half, but also cream cheese and mozzarella. It’s creamy, it’s dreamy, it’s classic.

This recipe is based off of a Morton’s Steakhouse recipe and if you’re looking for a truly classic steakhouse side, there’s probably no better place to look. Here’s how you go about it:

Boil your spinach in salted water, just long enough to wilt it, and then remove it from the pot and let it cool enough so that you can handle it. Squeeze handfuls of the spinach to get as much liquid out as you can and then chop those handfuls into strips about an inch wide. Believe it or not, that’s all the cooking you need to do with the spinach.

On the stovetop, you’ll cook down some onions and garlic in butter and then stir in some flour to thicken matters up. Half and half forms the base of the creaminess but there’s also cream cheese and mozzarella that get stirred in to help things along. Read: it’s SO creamy.

But it’s not just creamy, it also has incredible flavor thanks to some nutty parm and a little dash of nutmeg. Creaminess balances the earthiness of the spinach beautifully, but it’s not just about the creaminess and it goes well beyond classic flavor.