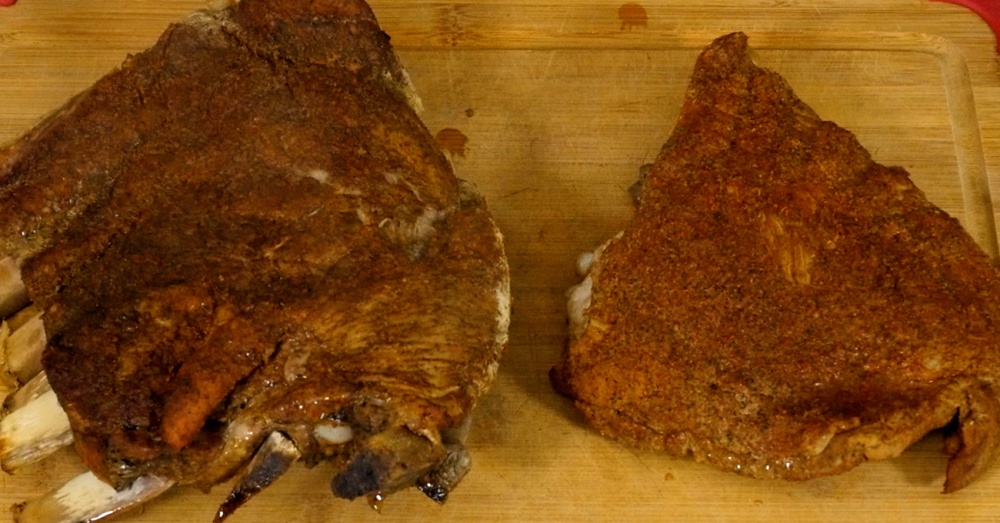 I think we all know that the goal when cooking ribs is to end up with meat that’s tender and falling off the bone – the question is, how do you go about getting there? While some people swear by their smoker, others are absolutely certain that their slow cooker is the best method… There’s about as many opinions out there as there are ways to cook ribs, so we set out to compare three standard methods to see which one truly turned out the best fall-off-the-bone spare ribs. We tried the Instant Pot, the slow cooker, and the oven all with the same ingredients to see which one won out. Take a look to see which method worked best!

To even the playing field, we used the same dry rub on all three sets of ribs and ours includes smoked paprika, chili powder, onion powder, garlic powder, salt, pepper, brown sugar, and something you might not quite be expecting – cinnamon. The cinnamon adds a unique warm flavor to an otherwise sweet and smoky rub. It’s hard to identify if you don’t know it’s in the mix, but it’s the kind of thing that makes you wonder just what is making it taste so delicious. With all three sets of ribs, we removed the membrane and then rubbed the spice mixture into the meat and then got them cooking in their respective methods…

They got four hours on high in the slow cooker with a little apple cider and Worcestershire so there was sufficient liquid in the insert.

The Instant Pot method is a twenty-five minute cook time, again with some apple cider and Worcestershire in the cooking insert.

And in the oven method, they get wrapped in foil and bake at 275°F for three to four hours.

So how did it work out? Right off the bat, it was easy to tell that the slow cooker was a succesful method since the meat was falling off the bone as soon as we set it down. Though they were all delicious ribs, the slow cooker definitely turned out the most tender meat. The baked ribs came in a close second, still with falling off the bone, succulent meat but just not quite as tender as the slow cooker ribs. The Instant Pot ribs were noticeably tougher, though that quicker method is absolutely sufficient when you don’t have four hours or so to put into making ribs. These are all useful methods with their own pros and cons but for this test, slow cooker takes it!

For the Instant Pot:

For the Slow Cooker:

For the Instant Pot:

For the Slow Cooker: