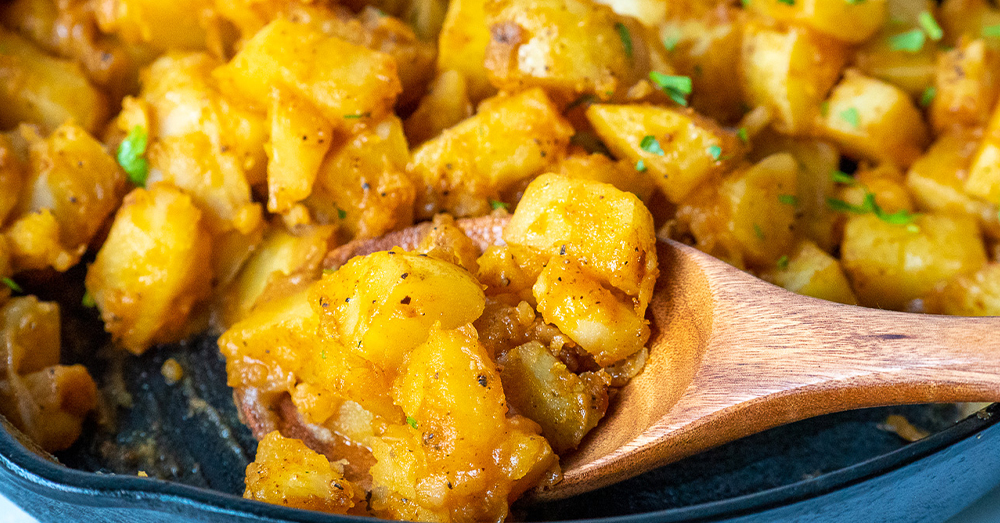 An easy, irresistible potato side.

When it comes to food, you can be sure that anything with the word ‘smothered’ in the title is going to be delicious. Why? It usually denotes a nice blanket of cheese, a generous layer of sauce, or a pretty nifty cooking method. With these Southern Smothered Potatoes, it’s that last option, BUT that cooking method also ends up giving you a savory, seasoned saucy result so you don’t need to top these with anything else. There are a million and one ways to cook a potato and most all of them are delicious, but this one is pretty hard to beat. Say hello to your new favorite side dish.

This is a place for Yukon Gold potatoes. Russets break down a little too much for this cooking method, reds are just a little too waxy, but Yukon Golds are the Goldilocks in this situation. You’ll want to chop them to bite-sized and slice up an onion and add them both to a bowl. There, you’ll toss them with garlic, salt, pepper, and paprika.

Could you season them in the pan? Sure, you could. But tossing it all together in a bowl ensures that every little bit of those potatoes is coated. It’s a quick step and one more dish to wash, but it gives you better flavor coverage.

From there, those potatoes (and onions too) head into a hot skillet of melted butter where they brown and sizzle for ten minutes or so. (Turn ’em frequently so they don’t burn.)

Then comes that ‘smothered’ part. Pour broth all over the potatoes, cover the skillet, and let it simmer until the potatoes are cooked through, which should take about 15 minutes. Simple, yes, but here’s what happens:

The onions cook down enough that they’re almost jammy and much sweeter than when they started out. The broth mingles with the seasonings and the bits of cooked potato that have shagged off the edges so everything is coated in a paprika-tinged, buttery, brothy “sauce” that’s just a little silky. These are easy to make but boy are they good. Like I said, there are a million and one ways to make a potato, and this is definitely one you should try.