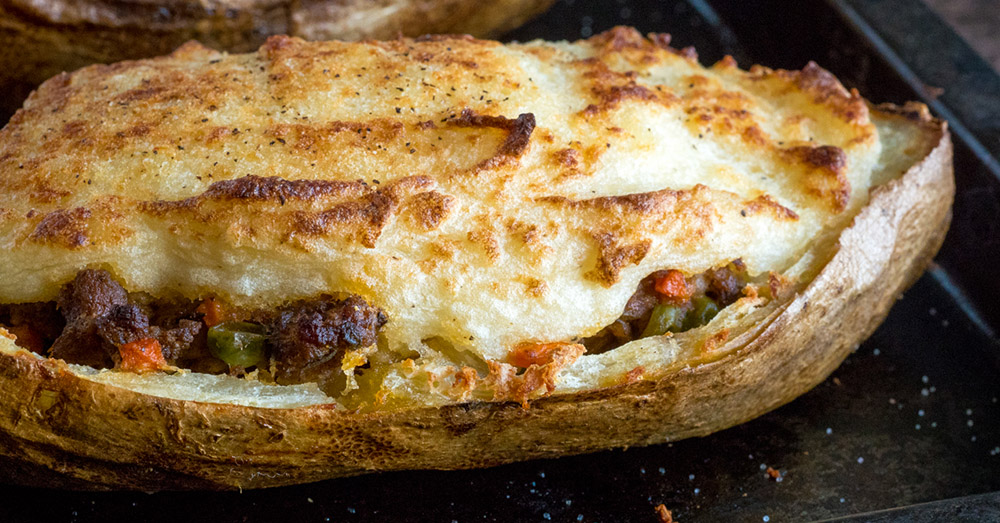 A complete package of comfort.

I have always loved Shepherd’s Pie because, well, what’s not to love about a mashed potato topping that’s been browned until it’s golden? Plus, there’s some hearty beef (or lamb if you’re being totally traditional) to go along with it, except it’s been cooked into a simple but savory delicious gravy complete with a couple of veggies. There’s not a lot to improve upon! But these Shepherd’s Pie Twice-Baked Potatoes take the dish to a whole new level. You get a personal portion of meat and mashed potatoes that are baked right into the potato skin so it really feels complete (and comforting too).

As you might have guessed, you start by baking some potatoes. (Though, if you’re short on time you can microwave them instead to speed the process up.) Once they’re soft – and cool enough to not burn your hands – you cut them in half and scoop out the insides into a bowl.

While the potatoes are baking, you can work on the filling, which is a delicious combination of ground beef, carrots, peas, onion, and garlic that you use to build a quick tomatoey pan gravy that’s accented with some herbs and Worcestershire.

That filling gets spooned into each empty potato half, and then you use the potato insides to make a buttery mash…

… that goes on top of each potato before they all head into the oven to get nice and golden brown.

Every bite has creamy potatoes and savory beef with a nice, velvety gravy just like a regular ol’ Shepherd’s Pie, but there’s also the crunch of a potato skin to hold it all together. It’s classic comfort food in a tidy little package.

Recipe adapted from Bake at Midnite.