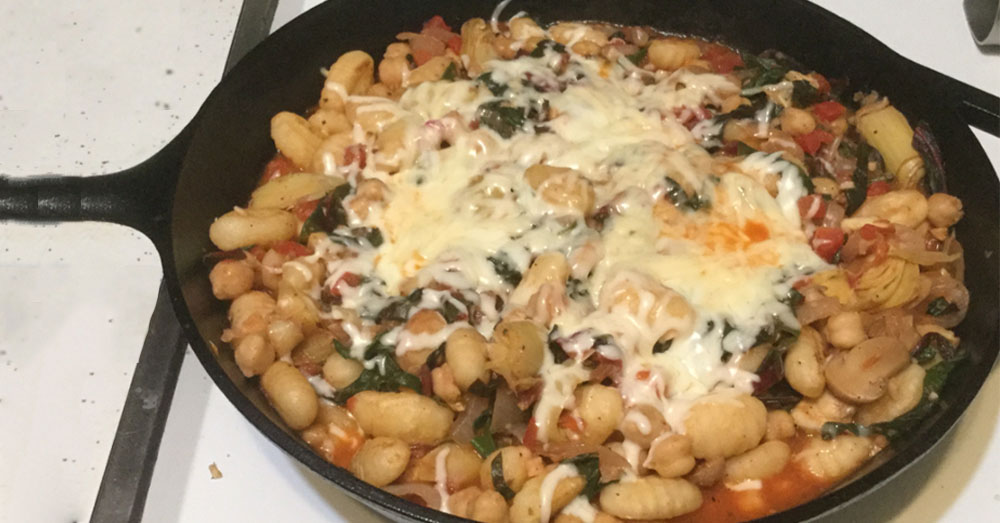 Get dinner on the table in under 30 minutes!

I was first introduced to gnocchi when I was in my early twenties. I had never heard of the little Italian potato dumplings until then, and boy, was I missing out! Gnocchi has since become one of my favorite special treats to make. This recipe uses packaged gnocchi to save time and money, but it’s still incredible, in my humble opinion.

Now that we’ve covered gnocchi, let’s talk about the other ingredients in this recipe. I like making it with chopped spinach, but you can replace it with chard leaves, kale, or a combination of all three! Then, we have onion, garlic, diced tomatoes, and white beans. It may seem like an odd choice, but trust me on this one! The beans not only taste amazing, they add some extra protein to this meatless meal.

To make this easy dinner, start by heating 1 tablespoon of oil in a large nonstick skillet over medium heat. Add gnocchi and cook, stirring often, until plumped and starting to brown, 5 to 7 minutes. Transfer to a bowl and set aside.

Finally, pour the cooked gnocchi back into the pan and cook everything until the sauce starts to boil. At this point, you can either remove from heat and serve with cheese sprinkled on top, or sprinkle cheese into the skillet and cover, cooking until it’s melted.

Oh, and did I mention this dinner takes less than 30 minutes to make? And, it’s a skillet meal, which means you don’t have many dishes to clean up after. That’s a win-win in my book. Go ahead and check out the recipe below!