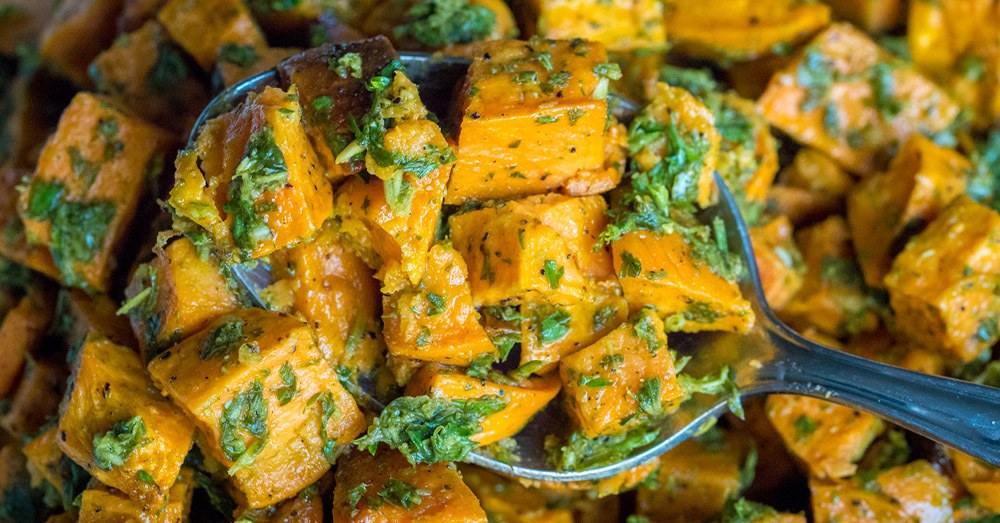 The flavorful Argentinian sauce livens up any savory dish.

Sweet potatoes have a special place at many family gatherings, though the sweet potato casserole still divides people on whether there should be nuts or marshmallows in the recipe. While “sweet” is in the name, you don’t have to make sweet potatoes into a sweet side dish. This recipe for sweet potatoes with a chimichurri sauce gets a ton of flavor from the complex and savory sauce, making it an incredible side dish at dinner.

The chimichurri sauce is an Argentinian speciality, thought to have roots in the 19th century. Some stories say that the origin is from Basque, English, or Irish, immigrants to Argentina. But, the most likely source is Italy- which has a similar sauce called salmoriglio. The truth is that the origins of chimichurri aren’t known, but the sauce didn’t become internationally popular until the 20th century.

Chimichurri sauce relies on a base of oil garlic, parsley, vinegar and/or lemon juice, and sometimes hot peppers for flavor. There are variations on this theme, but that’s the foundation of a good chimichurri. When spread over roasted sweet potatoes, they bring what is normally a simple side dish into the realm of unforgettable.

The sweet potatoes themselves are simple to make, roasted with just olive oil, cumin, onion powder, salt and pepper. These go into the oven for 30-35 minutes.

While the sweet potatoes are baking you can mix up the chimichurri sauce, although some people believe that letting the sauce sit for a few hours really brings out the flavors. If you choose that route then make the sauce 3 hours ahead of time (or even the night before you roast the potatoes).

For the sauce you’ll need to finely chop fresh parsley, cilantro, oregano, and garlic. If you don’t love one of those ingredients you can leave it out (cilantro, we’re looking at you). To the herbs add fresh lime juice, red wine vinegar, salt, black pepper, and olive oil. You can also add a pinch of red pepper flakes if you like. This sauce is commonly used over grilled meats as well, as it brings zest and complexity to anything you add it to.

When the sweet potatoes are ready simply pour the sauce over them, toss lightly, and serve while still hot. Sweet potatoes will never be the same again!

For the sweet potatoes:

Recipe adapted from Our Best Bites.