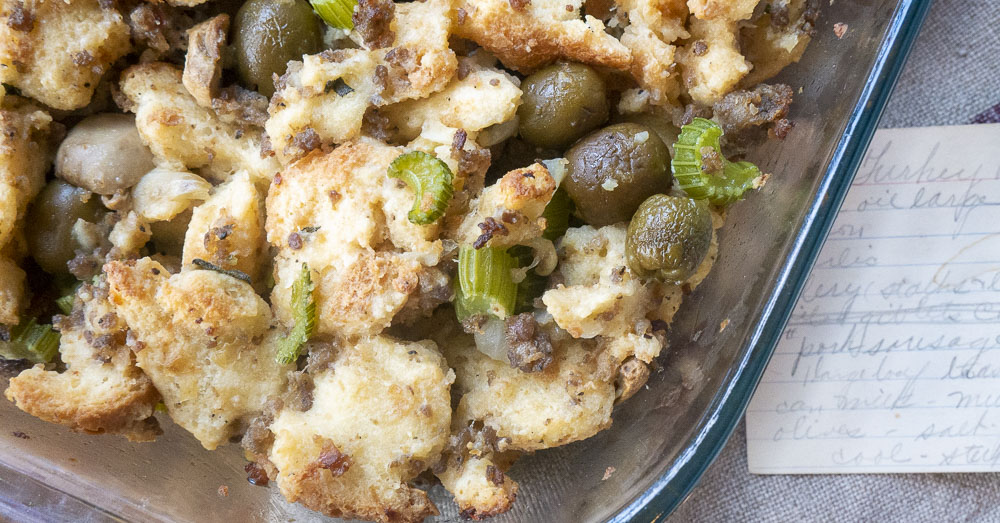 A retro stuffing recipe from an old recipe card.

Is Thanksgiving even Thanksgiving without stuffing? I think not. (And yes, I know it’s technically dressing if you’re not actually using it to stuff a bird and are concerned with semantics.) It’s one of my favorite parts of the holiday feast so when I saw this old recipe card, I was intrigued to see how this family’s vintage version differed from my own. And boy did it differ. A few of the ingredients gave me pause… but we’ll get to that in a minute.

This card is on a plain lined index card, with aged yellow edges and a partial water ring in the center from someone’s cup. It’s written in pencil but hasn’t faded too much, so it’s still easy to read though there isn’t a ton of info to go on like ingredient quantities. Or much in the way of instructions, for that matter. My favorite part of the card is that “boiled giblets, chopped” was originally written out but then fervently crossed out with an underlined “no” written next to it. I guess someone didn’t care for giblets!

You start with one loaf of toasted bread. I used sandwich bread and I tore it by hand before toasting it up in the oven. I’m sure French bread would work well here too as would a whole-grain variety.

Then, you soak that bread in a can of milk. I took this to mean evaporated milk, and while I’ve never made or had stuffing that called for milk, I went with it.

The card then tells you to take an indeterminate amount of onion and garlic and three cups of celery and “fry in oil.” I used one onion, a couple cloves of garlic, and I sauteed until the veggies were soft. Then, I added the pork sausage to brown as well.

Then comes the first ingredient that gave me pause — a can of mushrooms. Not so much that it’s mushrooms in stuffing — that seems normal enough — but rather that it’s a can of them and that you include the juice too. But it adds moisture and flavor! In it went.

Then for the more unique addition… a can of olives. It doesn’t say what kind of olives, so I went with green. They’re a little more buttery, a little more mild, and I thought their flavor would blend in better. (You don’t add the juice here!)

Then you add your sausage and veggie mix and stir it all up. Oh, and a little salt, pepper, sage and thyme.

The card tells you to let it cool and then “stuff, don’t pack.” Since I wasn’t making an entire turkey just for this experiment, I transferred it to a baking dish and gave it about forty minutes in a 350 degree oven, just long enough for the top to get crispy but not dry the whole thing out.

The verdict? That’s a pretty fine stuffing! (Excuse me, dressing.) Even though I was a little concerned about the lack of broth, it’s very moist thanks to the milk, mushroom juices, and plenty of veggies. Though there’s milk, it doesn’t taste like it in the end and the olives add a nice saltiness but surprisingly don’t stand out much. I think this would be even better baked in a bird but even by itself, it’s a nice medley of ingredients.