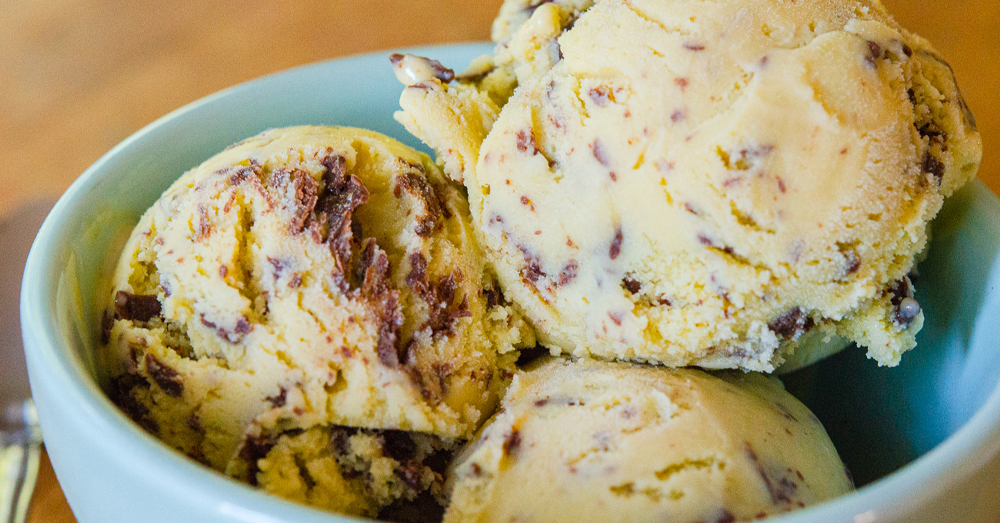 You can’t get this in the grocery store.

Mint Chocolate Chip Ice Cream shouldn’t be green. There, I said it.

Most of us are used to it that way, I know. But if your ice cream is bordering on neon, you’re probably looking at food dye and that’s usually a pretty good sign that that batch of ice cream has never even seen a mint leaf. Now, there’s nothing wrong with artificial extracts – they’re a great help in bumping up flavor or adding flavors that are otherwise hard to capture – but mint extract just doesn’t even come close to capturing the true cool, refreshing, green flavor of real mint.

If you’ve had true mint ice cream, you know exactly what I’m talking about. If you haven’t dug into a bowl of it before, if you haven’t spooned a cream-colored or nearly-yellow bite into your mouth and been gobsmacked by that pure mint flavor, then I implore you, I beg you, to go ahead and make some yourself. It’s not hard, you don’t need special skills, so grab some mint sprigs and get ready. You’ll never go back.

My first memory of real mint chip ice cream is of making it on the big front porch of my grandparents’ ranch in a wooden bucket with a hand crank after we’d all spent some of the morning collecting armfuls of mint by the creek. So, pretty idyllic. But what I remember more is being wowed by the flavor. It was unlike anything I’d had before. Now when I make it myself, I use an electric ice cream maker, but here’s how I do it:

The first step is to gather or buy a bunch of mint. Like, a big bunch. Two small bunches from the store will do. Pluck off the leaves, give them a rinse, and add them to some milk and cream that you’ve just brought to a simmer. You don’t want to scald the milk, just heat it enough to help with extracting the flavor.

Cover your pot and let it sit (off the heat!) for about an hour. When you lift the lid, it will smell heavenly, creamy and minty and so very good. Strain out the mint leaves with a fine-mesh strainer, pressing against them to really extract all that flavor.

Then you start the custard. But don’t be scared of custard. This is a very easy one.

Just combine some egg yolks and sugar in a saucepan…

… and then whisk in the strained mint-infused milk and cream.

Over medium heat, cook the mixture until it starts to thicken. You’ll want to whisk frequently but it doesn’t need to be constant, so don’t tire your arm out. You’ll know you’re at the right custard stage when you can swipe a clean line through the mixture on the back of a spoon and the edges don’t run.

That is the majority of the work, but to see success you need to chill the mixture down to a temperature that doesn’t melt the ice in the bowl of your ice cream maker. There are two ways to do this – an ice bath, which will take about four hours, or placing the mixture in the fridge overnight.

From there, you just pour the mixture into your ice cream maker and let it do its thing.

Now, you don’t want monstrous clunky chips of chocolate in your ice cream, you want delicate sweet flakes that melt in your mouth right along with the ice cream. To get that, you simply melt chocolate chips in the microwave, mix in a bit of vegetable oil and then drizzle the mixture into the ice cream maker at the very end of the churning process. You’ll get ribbons that break up in the machine, but you can use a spoon to break up any larger chunks.

The end result will be some of the best ice cream you’ve ever had, or at least I certainly think so. It’s cool (of course) and creamy with a flavor that tastes the way fresh mint smells plucked right out of the garden (or alongside a creek at your grandparents’ ranch if you’re so lucky) and the chocolate is a delicate accent that doesn’t overpower that bright flavor.