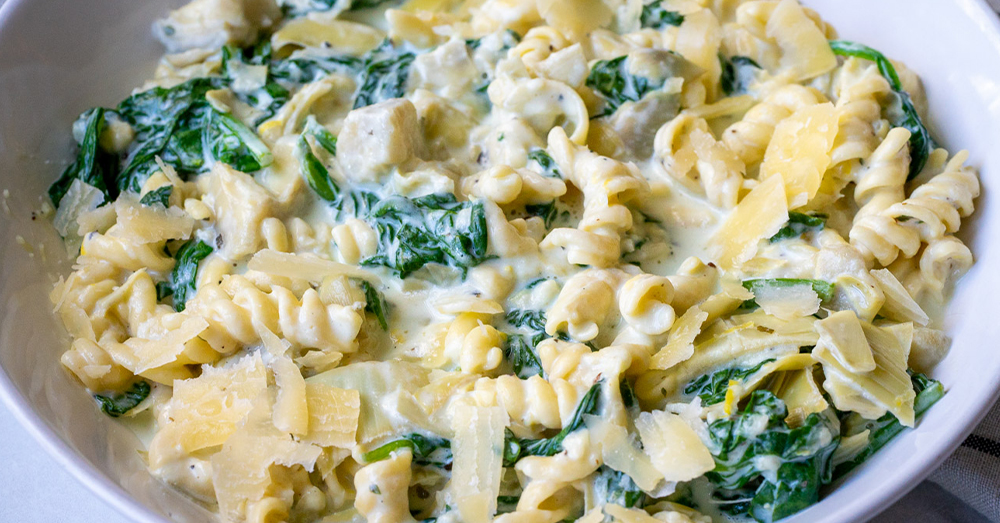 The oven does all the work.

Remember that feta pasta that took the internet by storm? It’s really no wonder it did… what’s not to love about a pasta dish that bakes entirely in one pan and also manages to be super tasty? But we thought maybe we could do even better than the original. Maybe we could add a spinach-artichoke twist and go with a creamier, cheesier sauce… Same method, same magic, but our One Pan Spinach Artichoke Baked Pasta gives you a whole different eating experience. It’s luscious, creamy, garlicky fare, and it comes together in a single baking dish. You don’t have to boil a single noodle!

If you’ve made the baked feta pasta before, the first part will seem rather familiar – placing a block of cheese in the center of a baking dish. In this case, it’s cream cheese, which is what gives the sauce its creamy, velvety feel. We’re also baking the pasta right in with everything else, no need to boil a pot of water at all. Just arrange the dry pasta around the cream cheese, pour milk over it…

… and top it with artichoke hearts, plenty of garlic, and some oregano, parsley, basil, and lemon zest.

Cover it with mozzarella and parmesan and then tightly with foil and bake until the pasta is tender and much of the liquid has absorbed. Then, you’ll stir in some fresh baby spinach to complete the picture. The amount of liquid you need varies depending on the pasta you use, so if you need to add a little more milk to loosen the sauce, go for it. If you have too much liquid, you can drain off a tad or pop it back into the oven to reduce a little more.

But when you stir that cream cheese into the milk, it thickens right up, and the spinach wilts and the mozzarella and parm melt into the garlicky goodness. It’s one of those situations where the oven does the entirety of the work for you, but the end result is as phenomenal as if you had spent hours toiling at your stovetop.