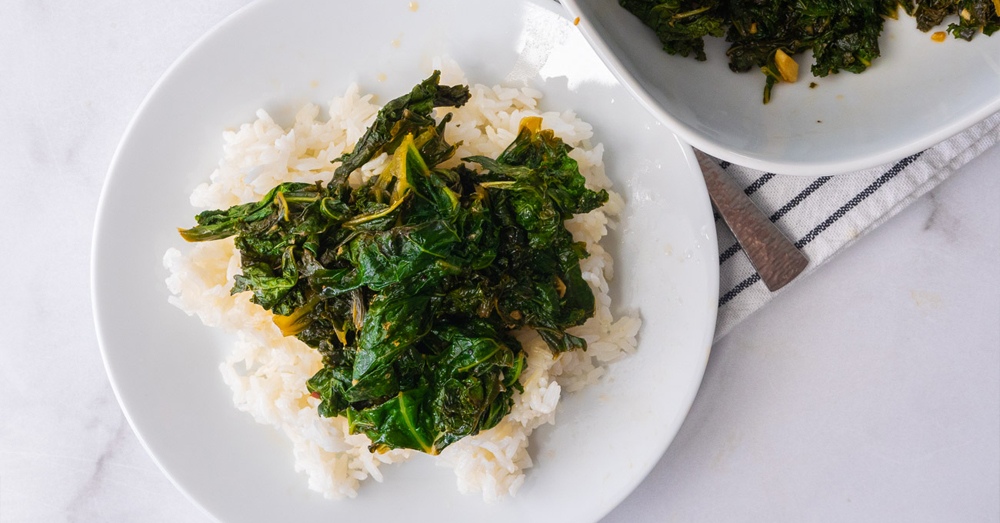 This tasty dish comes together in under half an hour.

For some folks kale is but a decoration to be found as a garnish on greasy spoon entrées. But, kale has been growing in popularity for a while now and it’s easy to find in any grocery at this point. Dark, leafy greens are some of the healthiest things you can eat and this lemon garlic kale sauté is packed with flavor.

This particular recipe happens to be vegan, but you add can a sprinkle of Parmesan cheese or serve along side some chicken breasts and still have a very healthy meal. Even if you aren’t a vegetarian, it can be good for your body to occasionally take a break from heavy meals. This recipe is one I’ve been making at home for years now and it’s a savory change of pace from comfort foods which -while delicious- can make you feel sluggish if eaten too often.

To start making this dish you’ll need to pull the leaves from the ribs and chop the leaves up. To be honest I personally leave the stalks in and just chop across each leaf, but they can be a bit tough so a lot of people prefer them without the stalks.

Heat oil in a large skillet and throw the kale in. Give the leaves about 5 minutes or so to soften inside and to crisp along the edges. They should begin to turn a darker, more intense shadow of green in the skillet. Season with salt and pepper before the next step.

Move the kale to the edges of the pan and pour in more oil to make a hotspot. Throw chopped garlic and some red chili flakes into the hot oil, but don’t let the garlic burn or it can become bitter. Stir everything together once the garlic has cooked. Sometimes if I’m looking for more spice I’ll use a 1/2 teaspoon of Sriracha sauce instead of the chili flakes.

The last trick to this recipe is especially important. With the heat still under the skillet pour in lemon juice and soy sauce. The lemon adds a wonderful hit of bright flavor while the soy sauce gives the kale an unmistakeable umami flavor that turns this recipe from simple greens into a satisfying main dish. Use gluten-free soy sauce or coconut amino acids instead and you’ve got a vegan and celiac-friendly dish.

This lemon garlic kale sauté is also really easy to customize. My favorite way to have this one is served over rice, but you can have this alongside pasta or quinoa or any other carb or legume you desire. This would be fabulous over spiced black beans or red lentils. Sometimes eating healthier is about making small changes and tasty meals like don’t taste like health food at all.