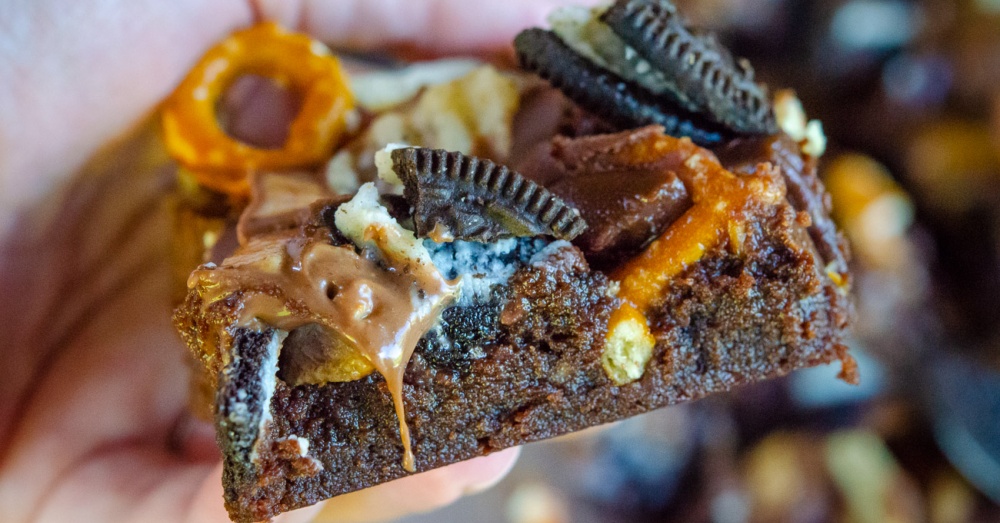 I thought I had the only brownie recipe I could ever need, but I’m not afraid to admit I was wrong. So, so wrong. I thought a basic, fudgy, chocolate brownie was as good as it gets, but see, I had never laid eyes on something as magnificent as these Kitchen Sink Brownies. They take a basic, fudgy, chocolate brownie and add in everything but the kitchen sink – there’s peanut butter cups, potato chips, pretzels, and Oreos all set into a dark chocolate ganache for a salty-sweet combination that is totally over the top in its deliciousness. They’re indulgent. They’re crunchy, soft, sweet, salty, fudgy… They’re everything.

The base here is my favorite go-to One Bowl Fudgy Cocoa Brownies. That means these are easy as can be – the batter isn’t any harder than using a boxed mix and relies entirely on cocoa powder for its rich and fudgy results, no melting of chocolate required.

Except for the topping, that is. You do have to melt together some chocolate chips and butter to form a sort of casual ganache to pour over the baked brownies. That’s what sets all that “kitchen sink” stuff in. But it’s no trouble at all, you just need a bowl and your microwave to manage it.

Once your brownies are out of the oven, you pour that liquid chocolate over the top of them and scatter your toppings all over the surface. I think we have the ideal medley – salty, crisp potato chips (use ones with ruffles so they’re somewhat sturdy); rich, sweet peanut butter cups; creamy, chocolate Oreo cookies; and crunchy salt-kissed pretzel twists.

But that’s not to say you couldn’t throw something else in there – this is a kitchen sink situation after all.