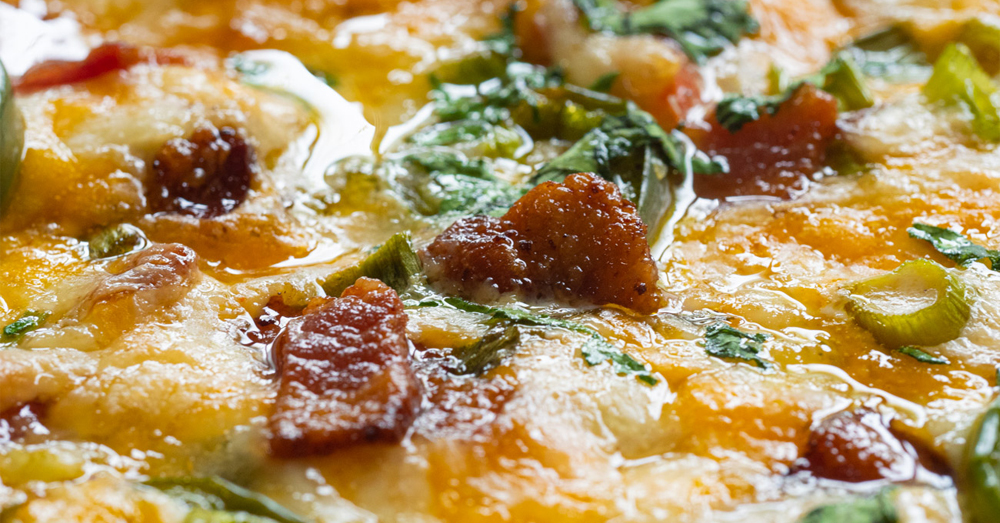 A jalapeño popper is like the world’s perfect appetizer… In one bite, it’s simultaneously crunchy, creamy, and a little spicy. And that’s exactly why it translates so well to other dishes, like this Jalapeño Popper Chicken Skillet, for instance. It’s a quick one-pan dinner that still has that creamy-fiery flavor combo you’d expect from your favorite spicy starter, but we’ve rounded it out with some chicken, cheese, and crispy bacon to really fill you up in low-carb fashion.

As many great things do, this starts with bacon that you brown up in a skillet. Once it’s crispy, you remove it and set it aside while some chopped chicken hops into the bacon drippings to cook through.

Then the chicken gets set aside and onion and bell pepper take its place in the skillet, just long enough to soften. Are bell peppers and onions traditionally part of a jalapeño popper? No. But this is an adaptation, and the extra veggies round things out nicely. Diced jalapeños and garlic join the party too…

… before cream cheese and a Mexican blend of shredded cheese get stirred in to make things creamy. The chicken and bacon head back in to get warmed through…

… and then more cheese, more jalapeños, and more bacon get sprinkled over the top. (And some green onion too.)

And then it bakes until everything is melty and bubbly and positively irresistible.

This is a one-dish dinner where space isn’t taken up by fillers like potatoes or pasta or rice. Instead, it’s alllll about that amazing creamy/cheesy/spicy combo. It’s still filling, and you can certainly serve it over some rice if you’d like, but it doesn’t need a single extra thing!

Recipe adapted from A Full Living.