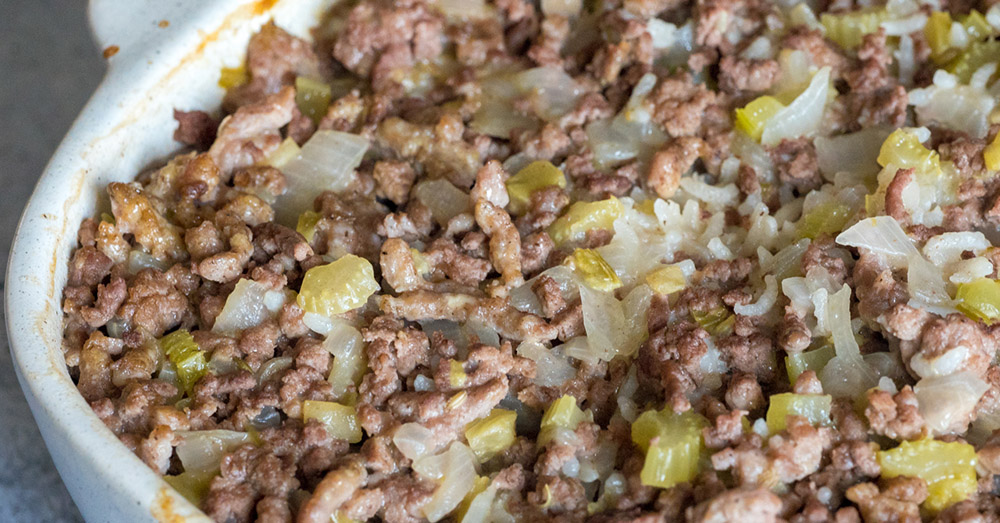 A hearty hodgepodge of comfort and flavor.

Jailhouse Rice is the sort of hodgepodge comfort food where the sum of the ingredients is much greater than its parts. It’s a hearty baked rice dish with a ton of flavor, packed with celery and onions and a creamy, fluffy texture. Make it once and it’ll be a frequent request from the family, but no problem there since it’s an entire meal in itself!

When I told you this was hearty, I meant it. It includes both ground beef and sausage that you brown up with a generous helping of celery and onions before you even get to thinking about the rice.

But that’s because in this instance, your rice doesn’t ever see the stovetop. Instead, it’s mixed with the meats, celery, and onion, and a mixture of broth and cream of celery soup right in the baking dish.

It bakes for a good long while – a little over an hour – but you don’t have to check on it or even think about it during that time. When the timer dings, the rice emerges tender and fluffy and infused with savory, meaty flavor. The soup lends a subtle creaminess and the celery is a nice departure from the cream of mushroom or cream of chicken you usually see in a dish like this.