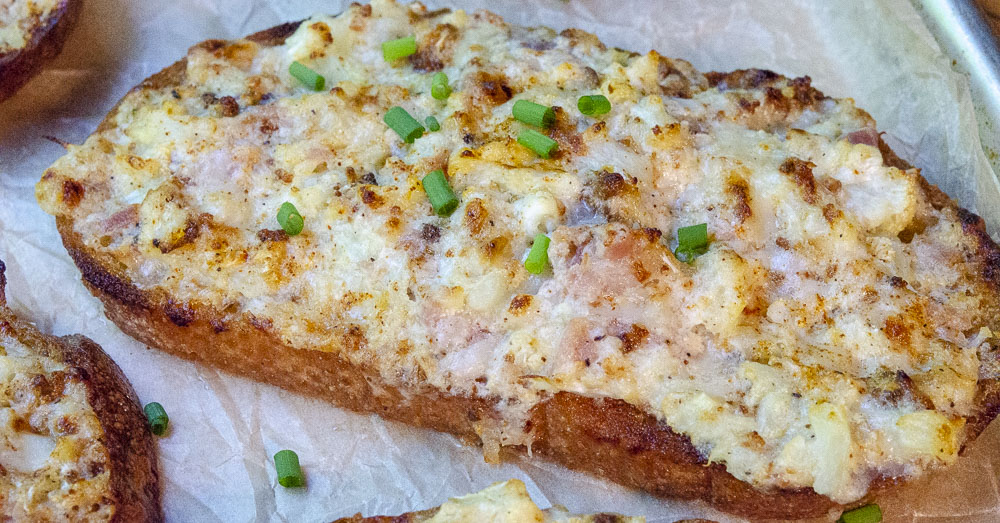 I trust Ina Garten pretty much implicitly so when I saw her Cauliflower Toast, trying it out for myself was a no-brainer. While cauliflower has become somewhat of a stand-in for all things carby (rice, pizza crust, mashed potatoes…), I like it best when it just gets to be cauliflower. Pair it with some crusty bread, some creaminess, and some cured pork and Ina was seriously calling my name. As wonderful as I expected it to be, Ina Garten’s Cauliflower Toast far surpassed my expectations. Move over avocado toast, there’s a new toast trend in town.

You start with cauliflower that you chop into small florets and then roast. Roasting something that’s only going to be made into toast seemed fussy to me but it was SO worth it. (Also a great use for leftover roasted cauliflower, I’m sure!) You want small florets here, about a half inch in size, because biting into crusty bread and a big hunk of veg is just a little much. Keep it dainty.

Toss ’em with olive oil, red pepper flake, and salt and pepper, and let them bake until they’re good and golden brown…

… about 25-30 minutes, which is far longer than I usually roast cauliflower, but Ina knows best.

You then mix that cauliflower with mascarpone (genius!), Gruyere, prosciutto, and nutmeg until it’s a nice melange of creamy, cheesy goodness.

The tender cauliflower breaks up a bit in the mixture, which you spread over six slices of golden toasted bread.

And then you broil. You broil until the mascarpone is a little bit bubbly and the Gruyere has taken on tinges of golden brown crispiness. The prosciutto warms up and lends its signature salty-sweetness and the cauliflower nestles into that rich, decadent, creamy base.

In other words, it’s delicious, and that doesn’t even do it justice. I don’t know if I can even look at a sandwich for quite a while — this is all I want for lunch for the foreseeable future.