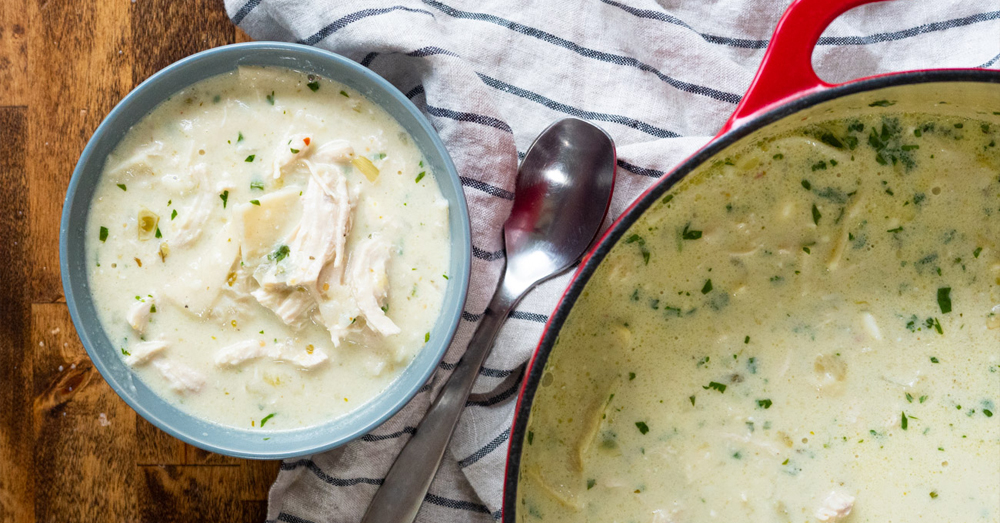 Creamy and savory, zesty but not spicy, and so easy to make.

Maybe the best thing about soup is that it’s just so cozy. And this particular Green Enchilada Chicken Soup, though it tastes a little bit creamy and indulgent, is the kind that warms you right up without weighing you down. It’s quick to put together – it’ll take you less than thirty minutes – but the flavor is so well balanced, with savory broth, cream cheese, sweet strips of corn tortillas, and zesty green chiles all working together.

One great thing about this soup is that you’re cooking the chicken in the broth, so you don’t have to worry about cooking chicken separately or waiting until you happen to have leftover rotisserie. You just sauté some onions before stirring in some chicken broth and then letting some chicken breasts bubble away in the liquid until they’re nice and shreddable.

From there, you build the zesty green enchilada flavor, which is thanks to (you might have guessed the first one) green enchilada sauce, salsa verde, and cumin. There’s also some Monterey Jack and cream cheese that you stir in, and they give this a wonderful velvety texture. (And a little creaminess never hurts.)

Strips of corn tortilla get stirred in last, so they soften but don’t go mushy on you. They make this a little more filling and add a nice chew – it’s a soup you can definitely make a meal out of. It’s a truly delicious soup, creamy and savory, and zesty but not spicy… so delicious that it’s hard to believe it’s so quick to put together!