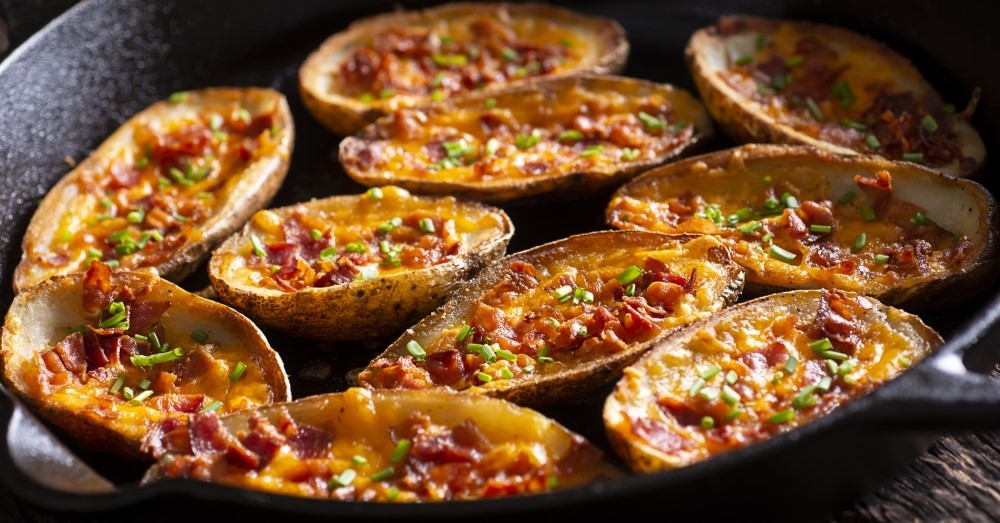 A super crispy, crunchy version of the snack favorite that you’ll love serving friends and family!

Potato skins are typically prepared in the oven, but they’re even more delicious when finished in a cast iron skillet. Finishing the potato skins after the spuds have been (mostly) hollowed out results in a super crispy, crunchy layer outside, complemented by gooey melted cheese, bacon, and chives on the loaded insides. With smart sectioning, you can make 3-4 skins per potato, and they leave enough “meat” left that you can use the fluffy potato insides for another side dish or appetizer.

For our Skillet Loaded Bacon Potato Skins recipe I chose to use russet potatoes, because they’re larger, hold together while crisping up well in the skillet, and are easy to carve out after the initial cooking. While you can opt to bake them in the oven first, I like to microwave them to save time – 30 minutes of microwave cooking (in pairs) can save you up to 45 minutes while still ensuring a quality result.

Another key element is the bacon you choose. Streaky bacon works best at getting things crisped up and crunchy, however, it produces a lot more oil. If that’s not to your liking, then choosing middle bacon works to mix up the fattier rind with more substantial bits of salty pork.

There’s no need to get too creative with the filling – if it melts and crunches it’s awesome! I use crispy bacon, shredded cheese, some steak seasoning and chives, with a splash of sour cream or dipping sauce at serving time. However, if you have left over pasta sauce from the night before, or even a creamy tuna mornay, they also work brilliantly as a tasty filling.

Skillet Loaded Potato Skins are the perfect casual appetizer – easy to make in large or small quantities and highly customizable according to preference. Pair these with some sliders or hot dogs, and it’s all you really need for a quality snack or gameday plate.