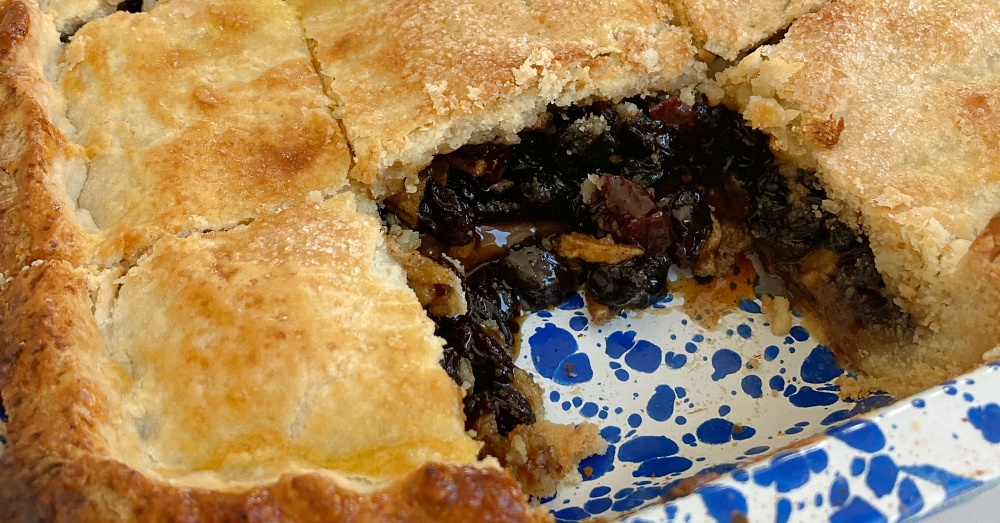 Sometimes the name of a recipe can either make your mouth water or it can intrigue you with the unknown. In the case of this Scottish recipe, flies’ graveyard, the name is actually a turn-off. But, hear me out- this is actually a lovely spiced fruit pie that’s reminiscent of minced pies. Sliced into squares, it’s also known by the less-offensive name of “fruit squares”. To be honest the latter is a much more accurate description of this rich and satisfying dessert.

Originally this recipe would have called for Zante currants, which a like smaller raisins. But, since these are not always easy to find in the US I’ve adapted the recipe to use regular raisins. You can use either. The little black fruits in the pie are what give it the appearance of “flies”- at least according to the Scottish. What a sense of humor they have!

To accompany the raisins there’s also dried cherries and some chopped Granny Smith apples in the filling. The only other ingredients in this simple filling are allspice and brown sugar. And, there’s no pre-cooking of the filling or pre-baking of the crust. All this adds up to a wonderfully simple sweet treat that packs tons of flavor into each bite.

But, my favorite part of any pie or pastry recipe is the crust. I just can’t get enough. And this one came together so easily. It also helped that I used a large silicone baking mat. Since you’ll need to roll out your dough to 8″x10″ I found the markings on the mat extremely convenient. The flexible mat also meant that I could easily hoist the top crust over the filled bottom crust without incident.

If you don’t have a baking mat then roll your crust onto your rolling pin for transfer to the pan.

For a lovely finish brush the top with one beaten egg and a sprinkle of sugar. Then you’re ready to bake. I have found that this needs to be covered about halfway through baking to ensure that there’s no burning or over-browning on top.

Slice into squares and serve with tea or coffee for a taste of Scotland right at home. Even for those who aren’t big raisin fans, these squares just might win them over. If you can get past the name, that is.