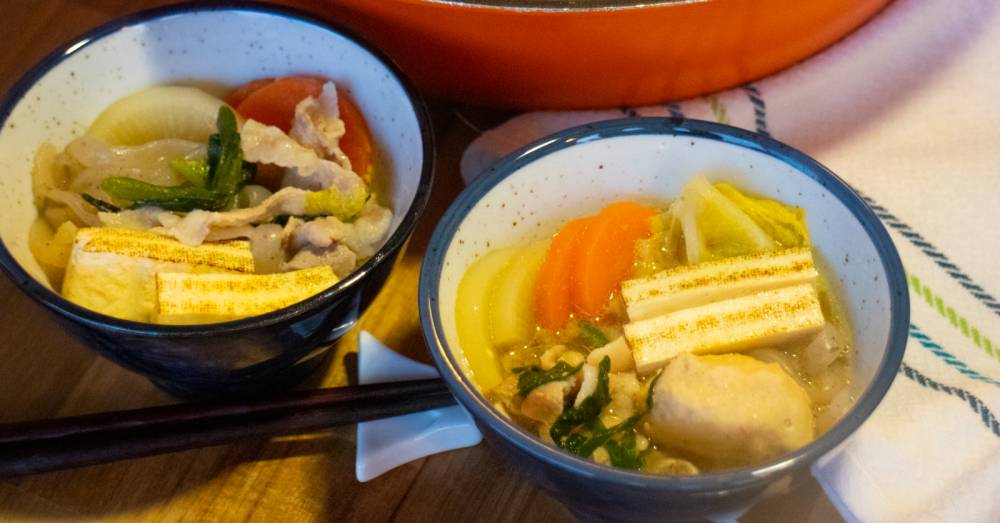 Nabé is the epitome of Japanese comfort food.

Nabé, or hot pot as it’s often called in English, is a winter staple in most Japanese homes, and the epitome of Japanese comfort food. It’s basically Japan’s version of the casserole. You can put almost anything into it and it feeds a lot. A typical nabé is made in a pot called donabe made of clay which helps retain heat and keep the soup warm for longer, but any pot will do. I use an aluminum pot which cooks faster.

For this nabé I went pretty basic, sticking to mostly meats and veggies. Cabbage is the base ingredient and usually the first item added to the pot. Here in Japan the cabbage used is called Hakusai and is sold quartered, but in western regions, it goes under the name Napa or Chinese Cabbage and may only come as a whole head. You add the cabbage first because it contains a lot of water, which gets added to the soup as it boils. So you use less water in the beginning but it fills up.

For vegetables, you can use whatever you prefer. I always use carrots, daikon radish, and green onions. Make sure to slice the carrots and radish thinly, about ¼ inch or less, so they cook thoroughly. I avoid using potatoes as they tend to dissolve when left too long.

In Japan, nabé soup stock is called dashi and can be found readily available in most grocery stores. It’s traditionally made by boiling kombu seaweed and Bonito fish flakes which give it a hint of fishiness, but in this recipe, I just used a premade stock (which is the easiest and tastiest way – in my opinion). However, since most western palettes aren’t keen on fishy flavors, and dashi isn’t very easy to find, a simple 5-to-1 mixture of chicken broth and soy sauce with some sliced ginger can work in its place. Though, I’d definitely recommend hitting up your local Asian grocer (if you have one) and picking up some dashi to try at least once.

For meat, I like to use thinly sliced pork belly (not bacon) and ground chicken balls, but you can substitute any white meat you prefer. Fattier meats like pork tend to add richness to the soup and give it more flavor.

The remaining ingredients, tofu, and konjac can be left out, but help create a well-rounded dish. They don’t add a lot of flavors, often taking on the flavor of the soup, but help fill you up. If you get tofu, make sure it’s the firm or fried type. Otherwise, it’ll break apart and be hard to eat.

Konjac is probably the strangest item on this list but well worth trying at least once. It’s kind of seen as a healthy food because of its high fiber content. It’s used a lot in Japan as a carb replacement for those on keto or low-carb diets. The type used in this dish is in noodle form which goes well with soup, but it can be found in many forms.

Once everything is chopped and in the pot allow it to cook covered for about 15 to 20 minutes over medium heat. No stirring is required. Everything will pack in pretty tight so it’s ok if some stuff is sticking out of the soup.

Japanese nabé is a warm, comforting meal and this particular recipe happens to be a favorite.