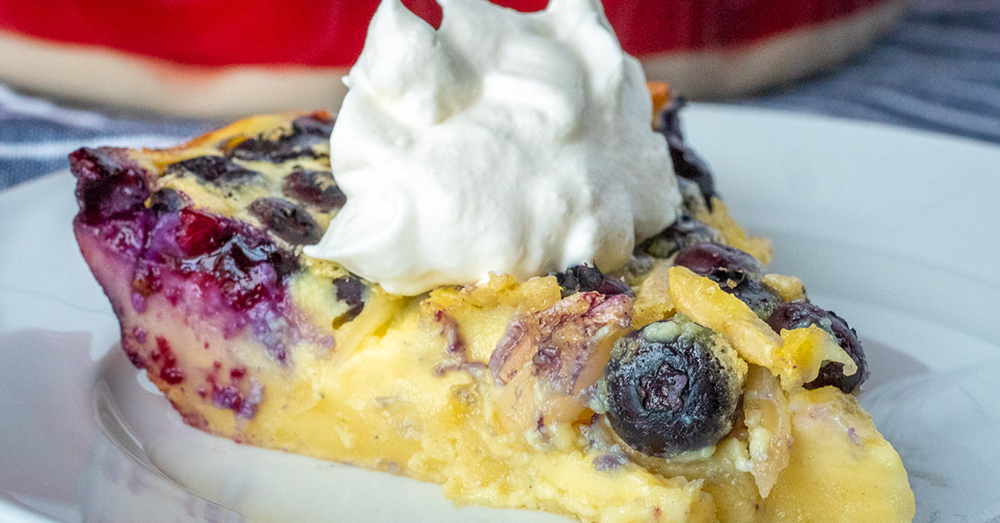 Throughout the 20th century clafoutis (pronounced “cla-foo-tee”) has been a dessert of comforting endurance for the French. Now, this satisfying dish can be a staple in your household, too, with this easy recipe for a blueberry almond version of the classic dessert.

Clafoutis was traditionally made from cherries and cherry pits, the latter of which gave the dish a distinctly almond-like flavor. But, cherry pits can contain cyanide, so today a much safer alternative is to make this dish with almonds and almond extract.

You can make this one with cherries, but blueberries are easy to find all year round in the states, unlike cherries which can be sparse on produce department displays for much of the year.

You can think of clafoutis as a sort of sweet, fruit quiche. But, it also bears some resemblance to flan, with its base of sweetened eggs and milk, and just a little bit of flour to help it all hold together.

After you make the batter, then fold in slivered almonds and pour into your pie pan. Then sprinkle fresh blueberries and brown sugar on top. This takes about a half an hour to bake and should be left to cool before serving, although it’s sometimes served room temperature or even warm. This clafoutis will firm up as it cools, so if it’s served warm it’ll be a bit runnier.

You can serve this alone or with a dollop of fresh whipped cream for a not-too-sweet treat. One taste of those plump berries surrounded by the thick almond filling and you’ll see why the French love this dessert so much.

Recipe adapted from Basil and Bubbly.