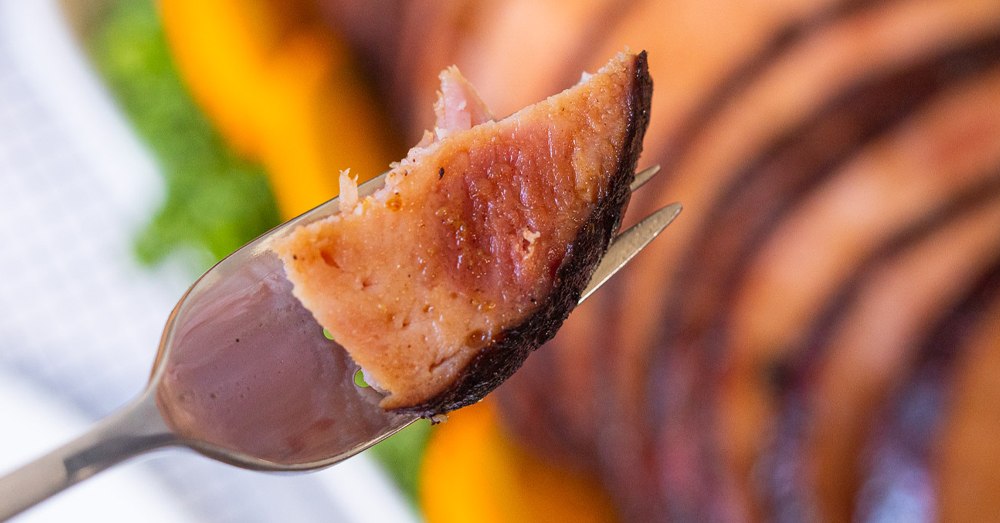 There’s something about a ham served with a special glaze that makes it the perfect holiday meal. Many people think of ham for Easter, but we love to mix it up and make hams for Christmas, New Year’s, and even Thanksgiving some years. Ham in particular goes so well with sweet flavors, so it should be no surprise that recipe that uses a soft drink in the glaze would be delicious.

This type of glaze is particularly popular in the South where we’ve seen it made with Coca-Cola, RC Cola, and even cherry cola. However, Dr. Pepper has a really complex flavor which makes it ideal for glazing a ham. This recipe also calls for orange juice, which gives the glaze a brightness that is so wonderful with the richness of the ham.

For this recipe we started with a 4-pound ham, but you can use a larger ham if you have one. Just increase the amount of glaze you make and adjust the time in the oven to reflect 15 minutes per pound of ham. This is assuming you start with a pre-cooked ham since that’s what’s available at most grocery stores.

To start making this recipe you’ll need to combine the cloves, brown sugar, Dr. Pepper, orange juice, and mustard and then simmer on low until thickened (about 12 minutes). During this step you’ll need to stir the glaze often as the sugar can easily burn.

Once the glaze is thickened you’ll need to place your ham in a roasting pan and then pour half the glaze over the top. Cover with foil and bake for about 1 hour at 350˚, basting with the glaze in the pan every 15 minutes.

Remove the foil and bake uncovered at 450˚ for 10 minutes so that the glaze can darken and become richer.

You’ll need to let the ham rest for up to 20 minutes before serving. We chose to present ours on a bed of kale leaves and orange slices because it looks so nice that way. You can serve the extra glaze at the table as a sauce. We love making some surplus for this reason because it means that people who love this glaze can pour a little extra on their ham (or even on their potatoes- we don’t judge).

While this recipe makes a lovely holiday main dish, it’s also easy enough to make even when it isn’t a holiday. It’s a simple way to make a ham special, whatever the occasion.