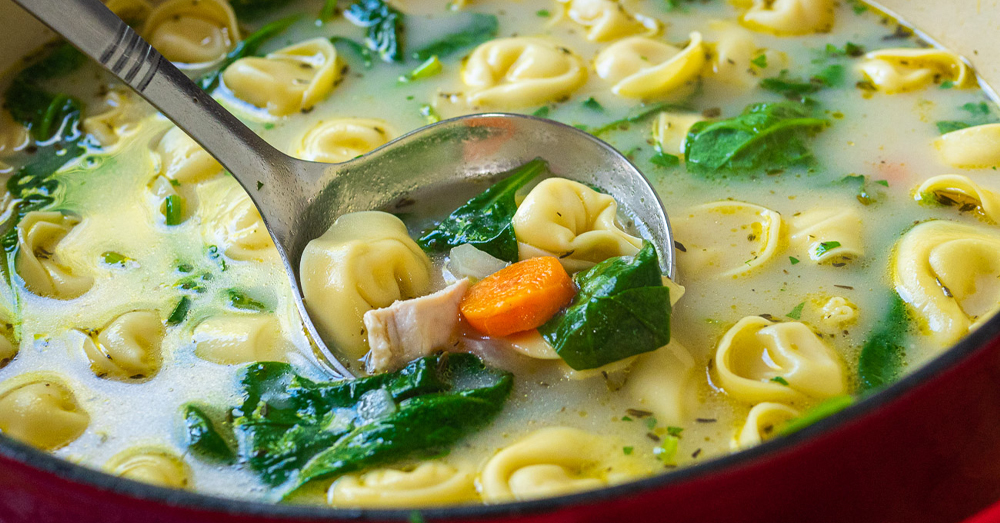 Chicken soup… but with the perfect addition.

I think we all know that nothing warms you up body and soul quite like Chicken Noodle Soup, and this… well this is basically Chicken Noodle Soup, but amped up with cheesy tortellini and a broth made just creamy enough so that it has a silky feel. It’s easy to make and oh-so-satisfying, which is exactly what you want when you’re looking for a bowl of comfort. (And believe me, this simple creamy soup feels like a hug in a bowl.)

I am a very big fan of chicken soups where the chicken cooks in the broth so you don’t have to worry about pre-cooking chicken separately or having leftover chicken on hand. That’s just what happens here. After sauteing some onion, carrots, celery, and garlic, you add the chicken breasts and cover them with broth and let everything simmer until the chicken has cooked through.

It adds both flavor to the chicken and true meaty flavor to the broth and it’s incredibly easy on the cook. You just pull the chicken out, chop it up, and add it back to the bubbling broth while the tortellini cooks.

The nice thing about tortellini is that it cooks quickly, so this is easily a thirty minute soup, but it’s one with a lot of flavor. Once the tortellini is done, you just stir in a touch of cream and some spinach and you’re ready to dig in.

It has everything that you know and love about a brothy chicken soup – the savory chicken flavor, the aromatics, the warming broth – but it boasts the comforting bite of chewy, cheesy tortellini and a subtle taste of cream. It’s not heavy or creamy enough to be considered a chowder or a stew… It’s still chicken soup the way you think of chicken soup, it’s just a little extra. And there’s nothing wrong with that once in a while.