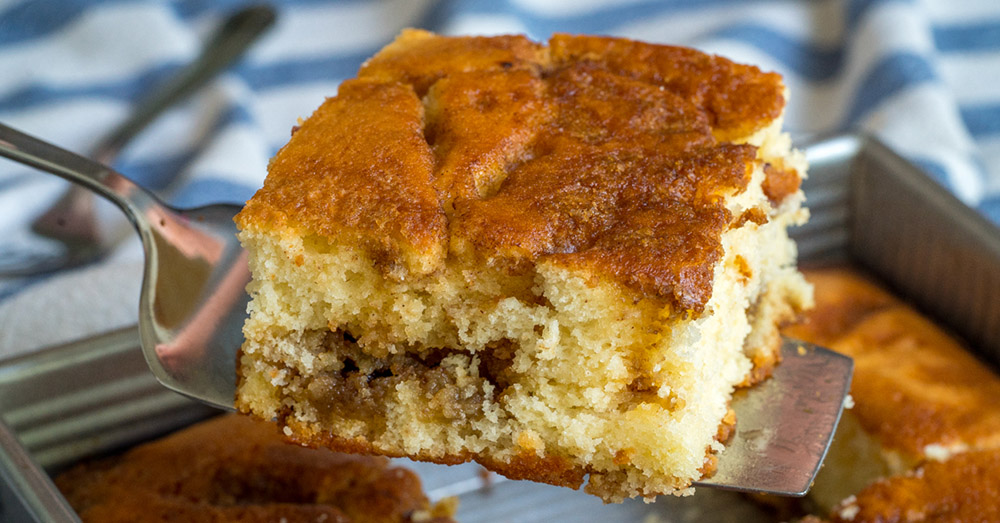 Those buttery brown sugar bites are EVERYTHING!

While it might look like your run-of-the-mill coffee cake at first, let us tell you, this cinnamon flop cake is so much better! If you haven’t heard of a flop cake before, it’s a spinoff of Swedish flop cake (a cream-filled, powdered sugar-topped cake) that skips the cream filling and focuses mainly on the buttery brown sugar topping. The topping is just three ingredients, brown sugar, cinnamon and butter, and you mix the brown sugar and cinnamon together, then cut in the butter to make a crumbly topping that you sprinkle over your homemade cake.

The crumble forms a sort of crust over the cake, while also sinking down and forming little pockets of cinnamon joy in the middle of the cake. One thing to note: there’s a fair amount of brown sugar in the topping, so you need to keep an eye on it while it bakes, making sure it doesn’t burn and covering it with tinfoil, if necessary.

Because of the butter in the topping (that subsequently drops down into the cake), your dough doesn’t need much butter at all, keeping it flavorful, but not too rich; that buttery sweetness of the topping is our favorite part of this dessert – it’s perfectly balanced out by the lightness of the cake and hits just the right chord!