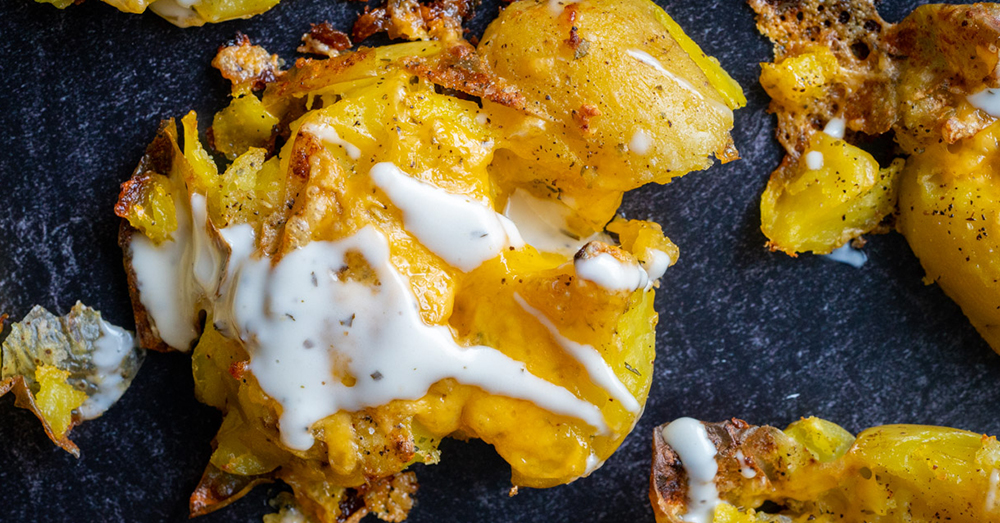 Ahhh, the humble potato. What other food can take so many delicious forms? From soup to French fries to mashed potatoes, the spud can really do it all, and here it takes the form of an appetizer that’s crispy and cheesy and very nearly addictive. These Cheesy Ranch Smashed Potatoes work as a dinner side as well, but they’re the perfect starter for game day and parties alike. Think potato skins… but with a whole lot more potato.

If you haven’t had a smashed potato before, let me be the first to introduce you. Basically, it’s a baby potato that’s been boiled until tender, then smashed, and then baked until it’s delightfully crispy. The point of the smashing is that it creates more surface area – it brings all those fluffy insides to the exterior so they have a chance to crisp up in the oven. (After they’ve been brushed with some fat, of course. In this case butter.)

Baby reds or Yukon Golds work wonderfully but this isn’t a place where russets shine. (Keep it to the small potatoes.) Once you’ve boiled them, you’ll want to smash them gently so you mostly flatten them but don’t smush them entirely. From there, you brush them with melted butter and garlic and top them with ranch seasoning and bake them until they’re golden.

And then there’s cheese. Because these are just begging for cheese… Cheddar it is and each little potato gets a blanket of it before heading back into the oven. The final flourish is a drizzle of ranch dressing, which picks up the flavors in the ranch seasoning and provides the perfect cool contrast to the piping hot potato. They’re pretty fast to make, which is good news because they dissapear quick.