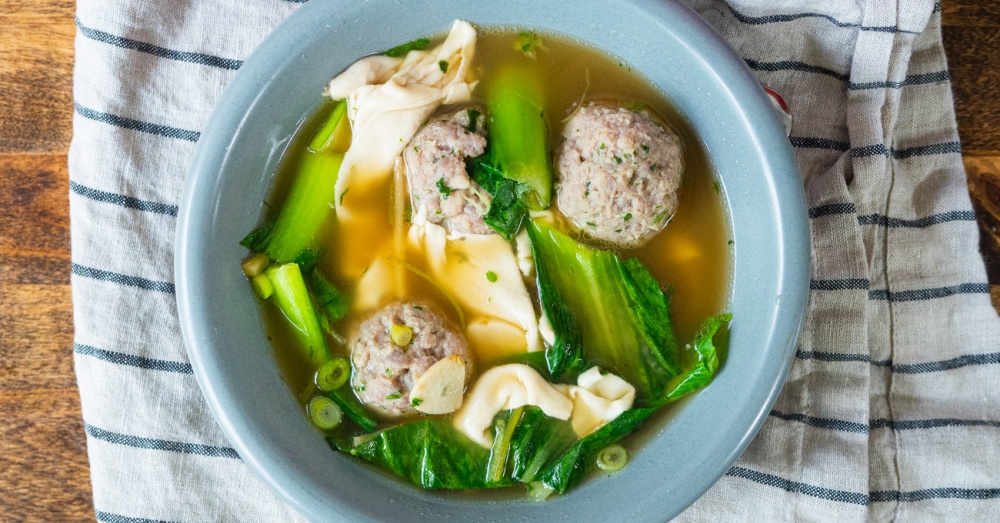 A thirty minute soup that doesn’t miss a thing.

Whenever I’m feeling under the weather or even when I just need a big brothy bowl of comfort, Wonton Soup is the soup I crave. But I don’t make it often. See, there’s always takeout to turn to and it’s just not the most convenient soup to make at home what with the wonton filling and wrapping… But sometimes you really just need a dose of home-cooked comfort, and that’s where our Broken Wonton Soup comes in. There’s no filling and no fuss, but you get the exact same brothy, salty, savory flavors you know and love. You just get it in thirty minutes, right out of your home kitchen.

I have had other meatball-based soups that sort of approximate the wonton soup flavor but don’t quite get there because they’re missing the texture I love. For me at least, if I’m craving Wonton Soup, I very much want the silky, doughy chew of the wonton wrapper in there and that’s where this shortcut soup really succeeds.

The broth has that same flavor I always crave. It starts out with ginger and garlic…

… and then of course includes chicken broth, but that’s built up with some soy sauce and cilantro.

Those infuse into the broth while you make the meatballs, which are a mixture of pork sausage, cilantro, green onion, and soy sauce. You’re mimicking the flavors that go into the broth, more or less, but it’s the same salty, meaty flavor of a wonton filling.

Those meatballs simmer in the broth, but what this soup does so smartly is it also tucks strips of wonton wrapper into the broth. They soften and have that same velvety texture that they do when they function as an actual wonton wrapper, just with a whole lot less work for you.

In every bite you get comforting broth, leafy bok choy, savory pork, and silky wonton texture, all accented by fragrant garlic and ginger and green onion. It’s so hard to believe this is a thirty minute soup – whether you’re feeling a little down or you’re feeling just fine, it always satisfies.