Boil A Whole Banana Before Bedtime For Better Sleep

Buying bananas in huge bunches is pretty much par for the course nowadays. Because bananas are so inexpensive, people buy a lot of them at once.

Plus, bananas are so good for you! They’re high in fiber and a variety of other healthy nutrients, including magnesium and potassium.

Bananas are truly incredible fruits — they’re portable, nutritious, and filling, which is more than I can say for lots of other fruits.

When you want to bring a healthy snack in your bag, you’re not going to grab, say, strawberries or peaches. You’ll pick a banana. It’s mess-free and has its own tough wrapper.

Because we all buy them in big bunches, though, the inevitable problem is that we sometimes end up with more bananas than we’re going to eat.

Instead of just waiting for them to get brown and turning them into banana bread, try this amazing banana tea!

Not only is it yummy, the potassium and magnesium are also said to make you sleepy, which makes this a perfect bedtime drink.

Follow along with the directions below to learn how to make your own delicious bedtime banana tea!

There’s nothing worse than lying in bed for hours without sleeping. You stare at the clock, counting how many hours you have before you have to wake up again.

On those nights, you’d do anything to fall asleep — keep it natural with banana tea.

This recipe only takes 10 minutes to make, which makes it perfect for those late nights when you just can’t fall asleep.

All you need is:

The first step to making this delicious nighttime tea is boiling some water.

Make sure the pot you use is large enough to fit a banana, but not so large that you end up with way too much water.

Step 3: Cut Both Ends Off Banana

While the water is heating up, cut both ends off the banana.

If you want, you can rinse off the banana before cutting it, but it’s not entirely necessary.

Once you’ve cut off the ends, throw them away, but don’t peel the banana!

Step 4: Place Banana (With Peel Still On) Into Boiling Water

When the water reaches a rolling boil, place the entire banana into the water.

Many of the benefits of this tea come from the boiled peel, which contains tryptophan.

While waiting, you can finish getting ready for bed — put on your pajamas, rub on some lotion, and get a good book ready to go. 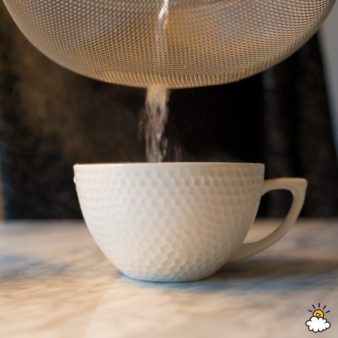 After the banana has boiled for ten minutes, pour the water through a strainer into a mug.

The strainer/colander will catch the banana as you pour.

Step 7: Sprinkle A Bit Of Cinnamon

Next, sprinkle a little bit of cinnamon into your tea and stir it in.

Although the cinnamon is optional, it adds a nice flavor to the banana tea.

Once you strain out the banana from the water, don’t throw it away! Sprinkle some cinnamon over the banana and eat it as well.

The boiled banana will add to the soothing effects of the tea, and it’s delicious!

The next step? Drinking the tea! Get under the covers with your favorite book and sip away.

The best time to drink this banana tea is an hour before bed, but it can be beneficial any time you drink it.

If you know anyone who could use this home remedy for sleep, please SHARE the recipe on Facebook!