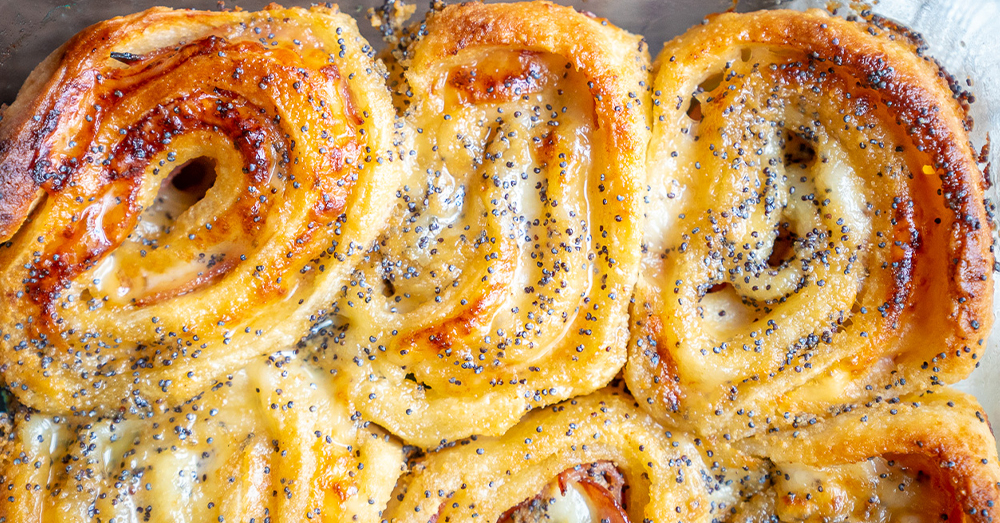 Who needs a ham and cheese sandwich when you can have these?

While ham and cheese sandwiches are absolutely wonderful, they can get a little… well, boring. But guess what’s never boring? These Ham and Cheese Rolls! Baked in the oven, they use a quick kitchen shortcut for the dough and come with a buttery, savory sauce that really might be the main event here. I love these for a lot of reasons — number one is certainly their deliciousness, but number two is probably their versatility — they work as an afternoon snack, lunch for a crowd, or even a make-ahead breakfast.

Would you believe me if I told you you only need eight things total here? It’s true. You need:

It’s not a lot, but it amounts to a ton of flavor.

You’re probably figuring out the order of operations on your own here now, but I’ll take you through it. First, you unroll that pizza dough and roll it out so it’s a rectangle about eight inches by sixteen inches in size. (It’s okay if it’s a little rough.) Line it with ham, then line it with cheese.

And then slice. You want nine slices and it helps to use a sharp serrated knife so that you don’t squish the whole thing to oblivion.

Pop those babies in a baking dish that’s just big enough to fit ’em and set ’em aside to rise for about twenty minutes. It’s forgiving, so don’t stress about it. While you’re waiting, work on that sauce I told you about. (i.e. the best part.) By “work on,” I mean, whisk some Dijon, poppy seeds, Worcestershire, and dried minced onion into some melted butter — that’s it. Pour it alllllll over those rolls so every nook and cranny will be kissed with that flavor…

See how they glisten with buttery sheen? See those crunchy golden brown edges of dough? Oh, but then those centers are pillowy and doughy… and there’s savory ham and nutty, melty Gruyere in every bite. It’s enough to make you forget the words “ham and cheese sandwich” ever existed. It’s ham and cheese rolls from here on out.