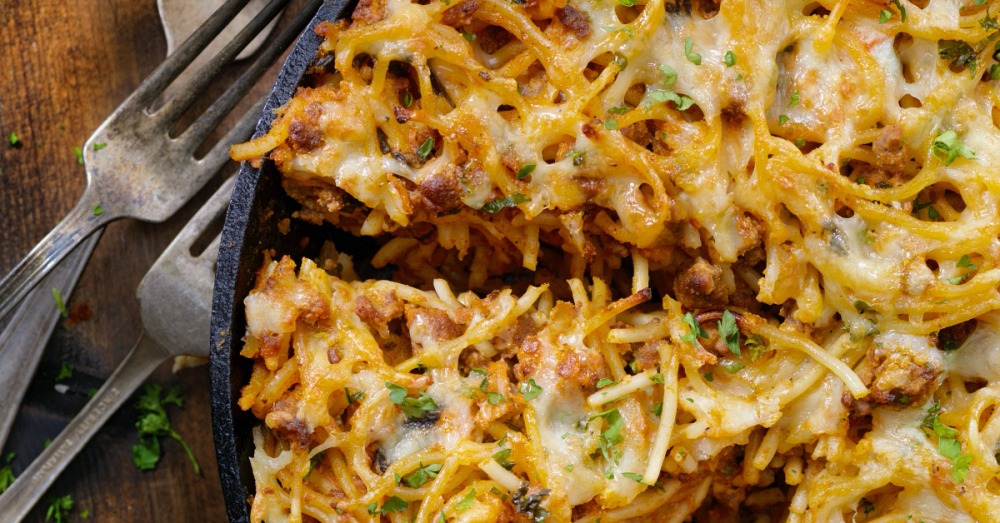 Pasta is one of those foods that’s always comforting, and always welcome at the dinner table. And, of all the pastas spaghetti is probably the most beloved. While it’s hard not to occasionally have some fun eating it there’s no denying that it can be a bit messy.

It’s one of the reasons that I love baked spaghetti so much. This wonderful dish is baked in the oven and then you slice it like a pie, meaning that instead of long and hard-to-manage noodles you end up with these short pieces that have been baked to perfection in a tasty sauce of San Marzano tomatoes.

When it comes to making a pasta sauce of the red variety there’s no doubt in my mind that homemade is heaps better and it’s not hard to do at all. The first secret to a sauce with tons of flavor is to use whole, canned San Marzano tomatoes. For years I rejected the notion that these slightly-more-expensive tomatoes could be noticeably tastier, but they really do add a new dimension to your dishes.

In my experience it’s like the difference between Roma tomatoes and heirloom varieties. They both taste good, but heirloom tomatoes often have a more intense and interesting flavor. And, another trick to a great sauce is to always start with canned whole tomatoes and crush them by hand (and use the juice they come in as well).

Cook the sauce down for 10 minutes and then combine the cooked spaghetti with the sauce and cover with the cheeses. Bake this for 20 or until just beginning to brown. For the final touch add chopped parsley on top and you’ve got a dinner that will soon become a family favorite, one that’s a lot less messy than the traditional spaghetti dinner!